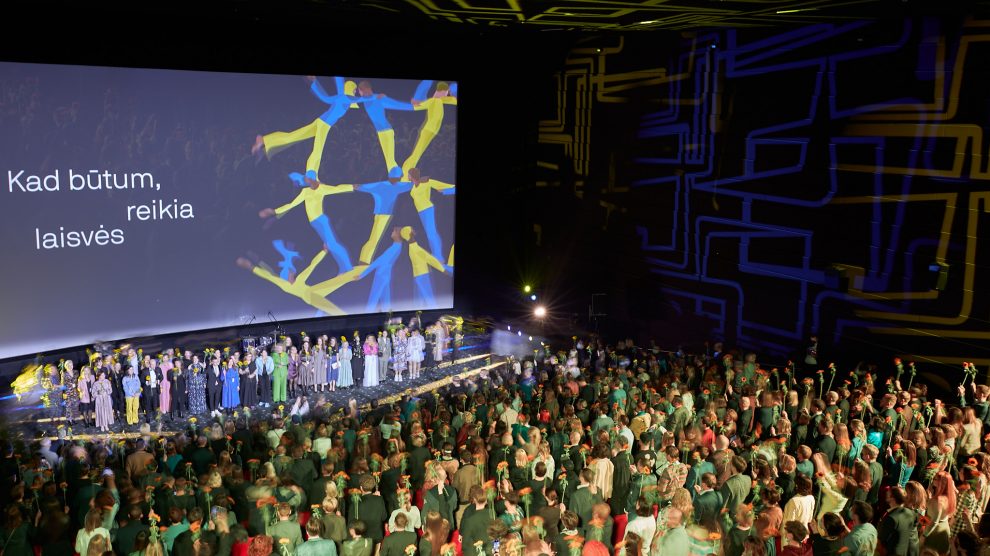 This year’s Vilnius International Film Festival is making Ukraine, and Ukrainian films, a key part of its programme.

Lithuania has been one of the most resilient supporters of Ukraine during the Russian-inflicted war and many arts, entrepreneurial, educational communities, as well as individuals, have been organising protests, initiatives, and donating millions of euros to war relief organisations.

Now, Vilnius International Film Festival, the largest cinema event in the country, has joined other local and global creative communities in paying homage to Ukrainian creators and inviting spectators to screenings in selected Lithuanian cinemas as well as one of the its best-known centres of culture — the Lithuanian National Opera and Ballet Theatre.

The event, which will be showing 90 feature films and 51 short films from 56 countries, dedicated its opening night on March 24 to Ukrainian colours and symbols: blue and yellow were displayed on the screen while the hall of Forum Cinema Vingis in Vilnius, the Lithuanian capital, was bedecked in sunflowers — a reminder of war fatalities and a glimmer of hope for those still fighting.

The festival is also the first event of its kind to boycott all Russian filmmakers following a petition by the Ukrainian Film Academy. Having removed Russian films and co-productions from the programme, the organisers will be screening Ukrainian films from the past few years.

At the same time, the festival is inviting all Ukrainian displaced people to watch films for free, and several screenings will have films translated in their native language. Lithuania has already welcomed over 28,000 people fleeing the war, and one of the films, Belle by Japanese director Mamoru Hosoda, was dubbed by Ukrainian refugee actor Karina Chernyavskaya.

“Our annual mission to show quality cinema was given a new meaning this year. We will commit to creating a reason and a place to meet up, be together, and feel a sense of unity and normalcy, which, according to psychologists, is essential right now, as much as possible,” says Algirdas Ramaška, CEO of the festival.

The festival is celebrating the return of live events after two pandemic years by upscaling its main venue and hosting screenings in one of the most prestigious cultural spaces in the country — the Lithuanian National Opera and Ballet Theatre.

The theatre, located in the heart of Vilnius and on the shores of the Neris River, was built in 1974 and has become an iconic symbol of Lithuanian culture and arts.

By transferring to a high culture venue, the event aims to show the undeniable value of cinema, as well as celebrate world-famous creators and films – Annette by cult favourite French director Leos Carax, Circus by Charles Chaplin, and many more. Other venues will also screen Pilgrims, a debut by Lithuanian director Laurynas Bareiša, which won the Orizzonti Award at Venice Film Festival 2021, as well as many other films.

Moreover, the festival will include Meeting Point Vilnius 2022, the work-in-progress audiovisual industry event, which aims to scout, develop, and support European creators and their debut films, at the same time creating a cross-Europe cinematic network.

Even though traditional events were scrapped during the Covid-19 pandemic, the unprecedented situation evoked several creative decisions on behalf of organisers in the past several years: drive-in screenings at Vilnius Airport, unlimited screenings in hotel rooms, and the option to see all films in the comfort of one’s home.

The LGBT+ Ukrainians fighting for freedom and democracy
Postcard from Łódź: Poland’s most underrated city
Comment