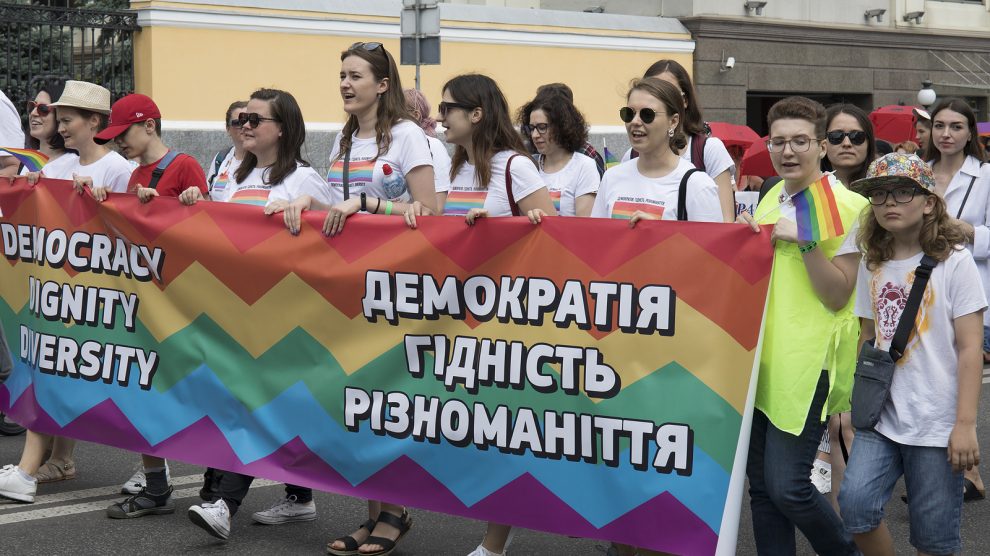 The state-sanctioned homophobia of the Putin regime has pushed LGBT+ Ukrainians to take an active role in the struggle against Russia while showing the world that Ukrainians are not only fighting for their sovereignty but also for freedom, democracy and human rights.

In the face of a shared imminent threat, Ukrainians have put aside differences and prejudice.

“The war has affected us all the same. Russia and its army target every Ukrainian, despite their gender or sexual orientation. [Vladimir] Putin’s goal is to demolish our nation completely,” a spokesperson for the LBGT+ organisation Donbas-Queer, active in Bakhmut, Kramatorsk and Mariupol, tells Emerging Europe.

Lenny Emson, director of KyivPride argues that the need to survive and provide help has also brought the nation’s LBGT+ community closer together.

“There are so many LGBT+ Ukrainians joining the military. We are working together to set up shelters and to organise evacuations,” Emson tells Emerging Europe, speaking from a dimly lit room during  the curfew which instructs residents of Kyiv to avoid lights and movement from 5pm to 8am.

He argues that the state violence on LGBT+ people in Russia is part of the reason why the community in Ukraine has been so active in the war against the invading forces.

“We are now seeing all kinds of violence and cruelty from the Russian army towards civilians. If there was a situation in which they knew that a person is LGBT+, it could end in many scenarios that I try not to think about,” Theo Koroner, a spokesperson for the Lviv-based Queer Lab UA, tells Emerging Europe.

The Donbas-Queer spokesperson argues the “Russia scenario” is not happening in Ukraine.

“We’ll definitely win, so we will make the rules, not them,” they say.

Longing for a better future

Ensuring their nation’s sovereignty is the priority for LGBT+ Ukrainians, while also hoping that these efforts will soon be recognised in a liberal and open post-war Ukraine.

Emson says that it is important for Ukrainian society to see that the LGBT+ community is there, “in the front lines, helping our military forces to win the war”.

Koroner, however, is less optimistic, pointing out that LGBT+ Ukrainians have attempted to openly serve in the military since 2014, but that their presence was initially met with hostility.

“We very much hope that the state and the wider society will see that we are as valuable as all other citizens fighting for Ukraine,” Emson says.

These hopes appear to be materialising even in the midst of the ongoing conflict.

Emson explains that the photo was reposted from a KyivPride social media post, which showed the faces of openly LGBT+ people in the Ukrainian military.

“We are really proud of this,” he says, “but even before the war, we were already in good contact with the government. The state has been on our side, the police have protected our marches, and the government has shown interest in passing legislation that would give us more rights.”

The role of social media

The explicitly pro-LGBT+ post made by the official Instagram account of Ukraine reveals the importance of social media in spreading awareness and bringing light to the community’s efforts.

This and other state social media posts are also important because they show the world the values Ukraine is fighting for and why the international community needs to stand firmly behind its army.

“The values the Western world is built on are now being stress and load tested. Are they still valid? Is something that lies on the basis of current European cultural and ethical leadership still alive and active? Our civilisation is now passing a huge test, inside and beyond of Ukraine,” Nataly Veremeeva, director of Tech Ukraine, tells Emerging Europe

She argues that listening to and spreading awareness of the experiences of those currently in Ukraine is essential to maintaining these values.

“Our biggest wars will be informational, so we need to learn new skills: being more aware of our thoughts, and the emotions that these thoughts are causing. Those who win in information wars, win also in real ones,” she says.

“We have so much evidence of the crimes Russia is committing, but a lot of it is in the Ukrainian language, so the Western world is not seeing the full picture. We very much appreciate more of these stories being told in English so the world can see the full picture,” concludes Emson.