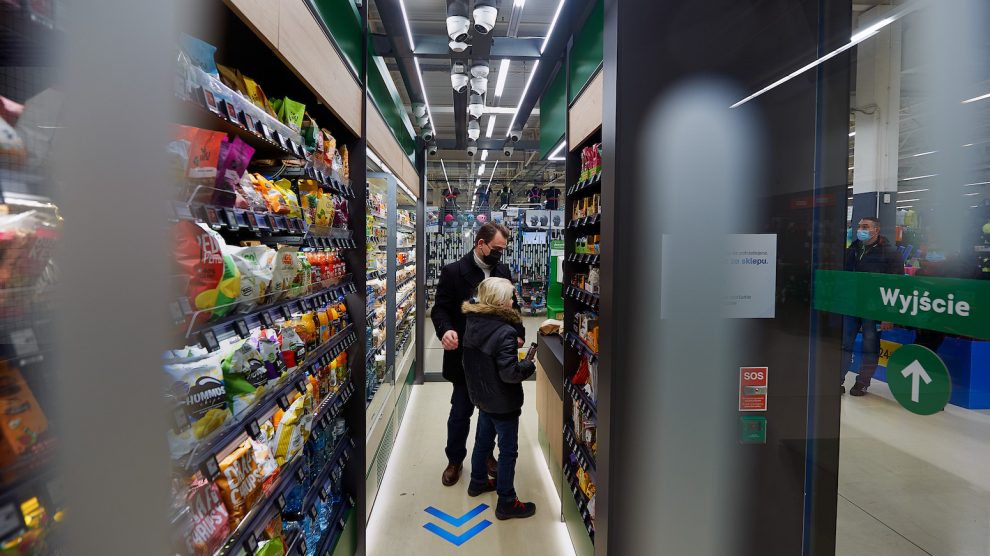 In Poland, shopping for groceries has never been easier, thanks to some innovative use of AI.

No queues, no cashiers, no cash registers, no scanning, no unexpected items in the bagging area. In and out, shopping done.

For Polish consumers, this dream has in recent months become a reality, following the roll-out by retailer Żabka of 25 Nano stores across the country, making it the largest chain of such autonomous stores anywhere in Europe.

The stores – the first of which opened in Poznań in June 2021 – operate in several formats from standalone container-based vending machines to traditional brick-and-mortar and store-within-a-store points of sale; each leveraging AI-powered technology created in close cooperation with American tech firm AiFi.

A dozen or so more Nano stores are in the pipeline for the first quarter of 2022, according to Żabka’s CEO Tomasz Suchański.

The Nano stores are integrated with Żabka’s smartphone app, Żappka, already used by more than eight million people across Poland. Before entering a store, the application generates a one-time QR code that facilitates access.

“Once inside, shopping is child’s play. You just have to take the selected products off the shelf and leave the store,” says Paweł Grabowski, director of unmanned solutions at Żabka Future.

In selected stores, customers also have the option of using a bank card for entry, providing a telephone number which will be used to provide a receipt, before again grabbing items off the shelves and leaving.

The system works by making use of cameras installed in the store which, combined with AI, recognises the products removed from the shelves and charges the appropriate amount either to a payment card attached to Żappka Pay or the bank card directly.

For Żabka, the new technology is all about convenience and customer experience.

“It is too early to say if the format impacts shopping behaviour,” says Grabowski. “Żabka Nano stores, generally speaking, are placed in high traffic locations where people would rather pop in for something quick to eat, drink or nibble on, to take something with them when going somewhere by train or as a quick lunch for work.

So far Żabka Nano stores are still a novelty. We are looking forward to seeing how the purchasing patterns in the autonomous stores develop.”

The autonomous Żabka stores are open 24/7 and operate on the same principles as vending machines.

The assortment at Żabka Nano outlets is tailored to the specificity of the location and customer profile. Depending on the model, they offer from 450 to 1,500 products. Each Żabka Nano store offers Żabka’s own brands, including snacks, juices and smoothies, ready meals and freshly ground and brewed coffee.

“The technology guarantees a higher level of security than traditional systems,” adds Grabowski. “Thanks to the images from the cameras, the system recognises the products and is able to verify whether these have been paid for.

“The innovative AiFi platform used in all stores uses machine learning to recognise the products removed from the shelves and automatically finalise the payment after leaving the store. The system does not identify customers and does not remember the image, which guarantees full privacy and security.”

Grabowski says that investment in AI is key to the group’s digital transformation.

“AI technology is already widely used in the whole Żabka chain. We rely on artificial intelligence and advanced analytics to evaluate new store locations. We use artificial intelligence to process massive amounts of data. The algorithms used by Żabka are capable of studying customer flows, competition levels and customer’s inclination to shop in our chain.

“In consequence, we can open stores located at relatively small distances from one another, providing several million Poles with access to a Żabka store within a distance of no more than 300 meters from their homes. After the first wave of commercial testing, new formats and wider adaptation of AI can be expected.”

But what do shoppers think?

Sylwia Karczewska, a student in Warsaw, loves the new format.

“I’m the kind of person who hates queuing: even one person is too long a queue for me, so this is perfect.

“What’s more, it really is as easy as Żabka claim: in, grab your stuff, out. I’ve even taught my grandmother how to use it. She still thinks it’s some kind of magic. I guess for her generation, who remember what real queues look like, it is.”

Trust your CEOs, be ready to adapt to shocks: TECHIIA founders share the secrets of their success
Norilsk to launch emission monitoring system by mid-2022, says Nornickel
Comment