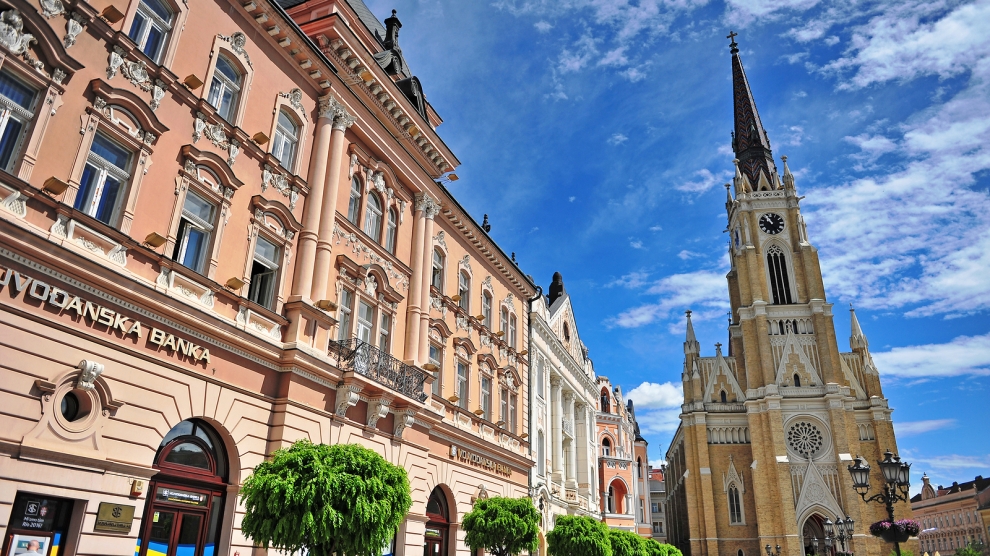 Stephen Ndegwa, the World Bank’s country manager for Serbia, and Peter Tabak, lead regional economist at the European Bank for Reconstruction and Development (EBRD) spoke to Andrew Wrobel, about the challenges the Serbian economy is facing and the opportunities it offers.

After enjoying positive yet modest growth of 1.9 per cent in 2017, the Serbian economy is expected to increase by 3.4 per cent in 2018 and by 3.2 per cent in 2019. According to Focus Economics, data for Q2 2018 shows a solid economic performance with the domestic economy expected to be the main engine of growth this year and next. This on the back of declining unemployment, rising wages and sizeable FDI inflows.

“The first quarter of this year was exceptionally strong, with 4.6 per cent growth, driven mainly by strong investment growth, but it remains to be seen if the performance can be repeated throughout the rest of the year,” says the EBRD’s Peter Tabak. “Medium-term growth prospects depend on the implementation of structural reforms. An acceleration of medium-term growth would need further business environment reforms and restructuring or privatisation of poorly performing state-owned enterprises, as well as further non-performing loans (NPL) resolution and progress with corporate over-indebtedness.”

The World Bank’s Stephen Ndegwa agrees that regaining the momentum in resolving inefficient and costly state-owned enterprises (SOEs) is key.

“Despite progress in recent years, SOEs retain an important role, and impose significant cost,” he says. “They employ over 200,000 people and are the largest companies in many sectors of the economy, for example, in energy, mining, rail and road transport, insurance, telecommunications, construction, etc. The outsized presence of SOEs deters private investment, innovation and competitiveness. Furthermore, SOEs pose substantial fiscal risks. Although we have seen recent decline, expenditures supporting SOEs are large.”

Over the past three years the government has spent more than two billion euros on propping up the SOEs — this includes direct subsidies, soft loans and payment of activated guarantees on loans.

“The partnership between Serbia and the World Bank has been good for quite some time. Working together we made strides in reforming many areas, which ultimately helped macroeconomic stabilisation. Some of the reforms were politically and socially very challenging, for example, in an excellent cooperation with Serbian authorities and with our financial support a good part of the SOE legacy was resolved, though some tough cookies – such as Petrohemija, MSK, RTB Bor, Resavica mines – still remain an issue impacting public finances,” Mr Ndegwa adds.

“Reducing these expenditures would free up significant public resources for more productive use, and resolving legacy SOEs, either through privatisation or bankruptcies, would open up important sectors of the economy to more investment,” he says.

The EBRD’s Mr Tabak says that the private sector in Serbia accounts for around 70 per cent of total employment.

“While small-scale privatisations have mostly been completed, some large companies remain publicly owned and operate with low efficiency and high cost. Our analysis shows that Serbia’s state-owned enterprises are among the least efficient and least profitable among their peers in central and south eastern Europe, barely breaking even on average. They might also receive explicit or implicit subsidies from public sources, for example, being allowed not to pay taxes or utility bills. Improving the efficiency of these enterprises or their privatisation could reduce strains on public finances and improve the quality of services. Last but not least, it would create a more level playing field where some public companies in the same sector do not get privileged treatment compared to other private ones,” he adds.

In the meantime, smaller companies in Serbia face a number of issues, including the challenging business environment, competition from the grey economy, high para-fiscal (i.e. non-tax) charges and access to finance, while medium-sized and large companies often lack appropriate corporate governance and are frequently over-indebted, which limits their access to finance and thus their investment capacity.

“While low wages make Serbia cost competitive in sectors such as manufacturing and construction, this is not desirable and sustainable in the long run. Serbia should invest more in education and training of its people – its most important asset. Long-term competitiveness also requires further improvement of the business environment, including a stronger focus on enhanced corporate governance in public and private enterprises, more efficient judicial processes, better quality public services, inclusive employment and education that better matches business needs. Our Investment Climate and Governance Initiative is aimed at tackling many of these issues, including governance in state-owned enterprises and public procurement practices,” Mr Tabak tells Emerging Europe.

The EBRD’s lead regional economist believes that although there are some foreign and locally-owned companies that operate as efficiently as those in western Europe, the majority of Serbian companies are significantly less productive, with value added per employee five times lower than the EU average.

“Our latest diagnostic paper shows that more inclusive labour practices (for example involving more young people at an early stage through training and internship programmes) and better governance (both in the public and private sectors) would support productivity the most. Higher-quality infrastructure, improved energy efficiency and a more stable macroeconomic environment would also be important contributors,” he says.

In the World Bank’s Doing Business Report 2018, Serbia ranked 43rd, four notches higher than in 2017. When we look at individual elements it seems that starting a business is relatively easy. Getting electricity, paying taxes, protecting minority inversions and enforcing contracts are still problematic.

“In terms of the business environment, Serbia has made excellent progress in some areas over the past few years,” Mr Ndegwa says. “However, surveys suggest that rule of law remains a key issue. For instance, according to the World Bank Doing Business survey, on the indicator related to Enforcing Contracts, the distance to frontier is 61.4 per cent, well below the regional average. It takes 635 days to enforce a contract in Serbia, and the cost reaches 41 per cent of the claim value. Similarly, the World Justice Report’s Rule of Law Index shows Serbia as a negative outlier in the region, with especially weak rankings for ‘Constraints on Government Powers’, ‘Absence of Corruption’ and ‘Criminal Justice’. It is often the SMEs that struggle most with cumbersome and expensive court and administrative procedures and addressing these should now be top priorities for growth to flourish,” he adds.

“Among Serbia’s Western Balkans peers only Montenegro is rated higher,” Mr Tabak says. “However, there is no room for complacency: in the past two years Serbia has dropped six places and it remains the only Western Balkans country on the Financial Action Task Force black list — high risk and other monitored jurisdictions — identified as having strategic deficiencies related to anti-money laundering and combating the financing of terrorism,” he adds.

Mr Ndegwa notices another challenge — despite neighbouring the European Union, the country is not fully benefiting from its location.

“Serbia has a fairly well-educated labour force and is competitive in terms of costs. However, despite these advantages, until recently its exports underperformed,” he says. “In other successful middle-income economies exports were driving economic activity. Happily, recently, we are seeing a similar trend in Serbia’s economy, as exports in some segments of the economy are growing strongly. We observe this across the sectors, and it is two groups of companies that are at the forefront of this trend – companies established through green-field foreign direct investment (FDI) and domestic de-novo SMEs. This presents a tremendous opportunity that the government can further strengthen by enhancing stability and predictability of the business environment.”

The role of FDI

According to the UNCTAD World Investment Report, in 2017, Serbia attracted FDI worth 2.87 billion UD dollars, 22 per cent more than in 2016.

“Over the last several years Serbia has been very successful in attracting foreign direct investment (FDI). It is among the top ranked countries in Europe in terms of FDI jobs created per capita. Yet companies established through FDI are almost fully reliant on foreign suppliers. There seems to be significant untapped opportunities in linking local SMEs to FDI companies through targeted SME upgrading programs, so that foreign investors use more local inputs beside labour,” Mr Ndegwa says.

He believes there are important opportunities in the ecosystem of innovative entrepreneurs, including in IT, digital and creative industries. “This sector is growing strongly, but the momentum could be lost due to constrained supply of IT, managerial, and creative skills; and lack of financing for innovative early-stage and growth-stage enterprises,” Mr Ndegwa adds.

He feels that the EU accession process can help enhance the efficiency of the public sector in many ways: improving the legal and regulatory environment through the gradual adoption of EU regulations, strong incentives for further reforms, raising the attractiveness of Serbia as an investment destination and the opening of EU markets for Serbian exporters.

The World Bank is supporting Serbia in creating a competitive and inclusive market economy and, through this, to achieve integration into the EU.

“We have been engaged in supporting the government’s ambitious reform programme for several years now and through a series of budget support loans have helped tackle one of the highest country’s priorities: state-owned enterprise reform, public utilities in the transport sector and electric power, and reform of public expenditures. Our 1.8 billion US dollar portfolio of 13 projects addresses a range of different needs in areas of transport, real estate management, health, early childhood education, business environment, competitiveness, financial sector, and job creation, and disaster risk management and insurance,” Mr Ndegwa says.

A light at the end of the tunnel?

The EBRD’s current portfolio of projects in Serbia is worth 2.2 billion euros. Since the beginning of its involvement, the bank has been engaged in 220 projects worth over 4.8 billion euros. In March, the EBRD published a new strategy for Serbia.

“The EBRD country strategy for Serbia identifies priority areas where the EBRD aims to provide crucial support with its investments and engagement: private sector, financial sector and public utilities in infrastructure and energy. We have concluded several projects and have more in the pipeline and we will aim to deliver as much as possible in the coming months,” Mr Tabak says.

“Serbia continues to be politically stable, focused on making progress on its path to EU accession path, and bold when strong reforms must be made. I believe this is something that helps attract investment. In the coming years, Serbia has the opportunity to be even more ambitious in its goals, bolder in its reforms, and transform into one of the most competitive economies in the region as it prepares to enter the EU,” he adds.

The huge potential of Serbian mining
What is Abkhazia?
Comment