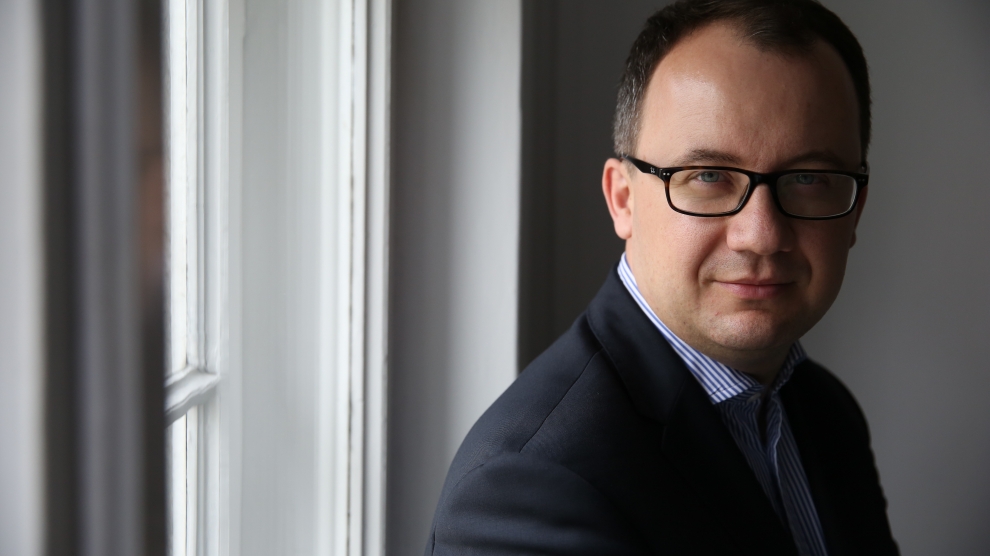 On the day that Polish President Andrzej Duda signed into law judicial reform legislation which had been heavily criticised both within Poland and internationally for enabling the government to effectively take control of the country’s Supreme Court, Shakhil Shah met Adam Bodnar, the Polish Ombudsman at the Commission for Human Rights and staunch defender of the rule of law.

Poles were once again on the streets demonstrating about the continued state capture of the country’s legal system on July 27, this time after the ruling Law and Justice party (PiS) cut short the term of 22 justices – including the current chief justice, Małgorzata Gersdorf – by lowering the retirement age. Mrs Gersdorf has shown defiance by refusing to leave her job: constitutionally, she says, her mandate does not expire until 2020.

Few Poles are more concerned than Dr Adam Bodnar, the country’s ombudsman whose role is to protect the rights of ordinary citizens.

“I have no doubt that the policy of forcing judges to retire at 65 is not based on merit and real needs,” he tells Emerging Europe. “From the constitutional point of view different retirement ages for professors at universities, judges at the supreme court or distinguished civil servants are easily justified, because these types of professions are based on maturity and wisdom.”

He believes that the motive behind the change in retirement policy was simply to push the government’s agenda, subordinating the judiciary to the will of the government.

“This a slippery road towards an authoritarian model,” he warns. “Not in the sense that we will see politicians dictating decisions to judges, but rather in a sense that different measures are being created so that the judiciary will not be in a position to do anything unexpected. Occasionally, the judiciary can make judgements that cause problems for the government, for example in terms of financial expenses, the criminal responsibility of some members and so on, whereas the government would prefer the judiciary work more or less in accordance with the general will of those in power.”

‘Not corrupt in the traditional sense’

So is he saying that Poland has a problem with corruption?

“Poland is not a country of corruption in the traditional sense,” says Dr Bodnar. “We have worked very hard to rid the country of high-level corruption. Neither are we a country of oligarchs. I can say many things about PiS, but they are not oligarchs.”

That is not to say, however, that corrupt practices do not exist, particularly in state-owned companies.

“The amount of money being earned by some people in state-owned companies creates a kind of bond of loyalty between them and the ruling party,” says Dr Bodnar. “Then there is the somewhat unclear relationship between the government and some circles of the Catholic church. We are getting into that kind of network where relationships become unclear.”

It is the threat of backroom deals, and the government wielding far more power than it should over the very people it is meant to protect that makes defenders of human rights and the rule of law, such as Dr Bodnar, so keen to protect judicial independence.

“In this context it is quite dangerous that the judiciary is now also getting itself into this network, because then it makes it more difficult to explain abuses,” he says. “The danger, which is twofold, is not only that the judiciary would penalise members of the opposition or some dissident organisations but that the same judiciary could be used to achieve political ends when needed. This is the primary threat of taking away the independence of the judiciary.”

Dr Bodnar has experienced first hand the effects of being a vocal and active advocate of the rule of law.

“I am one of the last independent institutions,” he says. ““I think that the government feels it would look bad to dismiss me or to even make an attempt to dismiss me. It would cause new problems for them from an international point of view. But on the other hand they do not want to show any legitimacy or support for me, which means that my role is to a large extent marginalised. I cannot expect a new budget adjusted to my needs, neither can I expect the cooperation of the government in the Sejm [Poland’s parliament].”

As if to illustrate Dr Bogdan’s point, PiS MPs walked out of parliament en bloc last week as he rose to deliver his latest report. Some directed verbal abuse at him as they left.

“In my opinion it is a bit like the theatre,” he says, remaining sanguine. “If I am opposed to certain government changes to the judiciary, then the government is not going to sit and listen to me. It is a kind of game, and show of power, but it’s their problem. I am satisfied that people could listen to me and that there was some interest from the media and the opposition. The government might have been better off choosing different tactics, showing up in big numbers and even trying to even pull me up on some issues.”

Killing the voices of dissent

Dr Bodnar, who has been in his post since 2015, is alarmed at the increase in force being used by the authorities against peaceful protesters. At a protest in Warsaw on July 20, at least one protester was hospitalised with head injuries following a confrontation with the security forces.

“Nothing will change in my opinion as long as the government is so concerned with its specific vision of a strong state,” believes Dr Bodnar. “If we had a government that deeply respected human rights and constitutional values, then during all the protests that have been happening across Poland, the police would behave in a very pro-freedom and pro-libertarian way. Unfortunately, at the moment they are behaving in a way whereby they are protecting state officials and institutions from any protests.”

On July 25, a report published by the Council of Europe’s Committee for the Prevention of Torture and Inhuman or Degrading Treatment or Punishment (CPT) found details of enough allegations of physical ill-treatment – including punches and kicks – to conclude that “persons taken into Polish police custody continue to run an appreciable risk of being ill-treated.”

The CPT calls on the Polish authorities to pursue “rigorously” their efforts to combat police ill-treatment. The report advises that police officers “throughout the country” should receive a “firm message that all forms of ill-treatment of persons deprived of their liberty are unlawful and will be punished accordingly.”

Not that we should be comparing Poland to Belarus or Azerbaijan just yet, Mr Bodnar concludes.

“Nobody is imprisoning people, and no one wants to imprison people,” he says. “However, that does not mean that by using all the different instruments at its disposal the government is not creating a kind of fear within society regarding certain topics and issues. This is killing NGO and opposition activity, and with it some of society’s voices of dissent.”

Beyond tourism: Reasons to invest in Croatia
Investing in Armenia
Comment