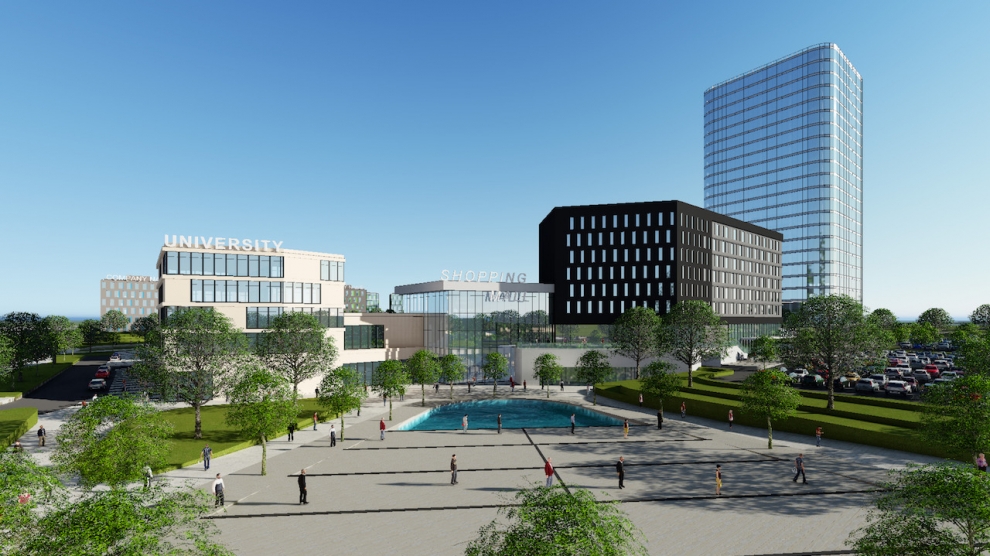 With the fast-developing IT sector and most IT firms occupying refurbished Soviet-era office buildings, demand for modern office space is sky-rocketing, says Volodymyr Zhenchak, CEO and the owner of Galereja Centre Ltd, which has developed the Forum Lviv shopping centre, and vice-chairman of the board of the shopping centre. He spoke to Eva Keller about Innovation District IT Park, which his company is developing and looking for partners for.

Today, there are about 15,000 IT specialists in Lviv alone, or 60 in every 1,000 inhabitants. Over 80 per cent of companies intend to increase the number of their employees in Lviv, within the next three years. How does that translate to the available office space in the city?

Yes, indeed there are about 15 000 IT specialists in Lviv alone, and for the past three years the annual growth of employees in IT companies has reached around 20 per cent. We expect that by 2020 there will be at least 25 000 IT specialists which, of course, will mean additional office space will be needed in the city. The IT industry, together with tourism, agriculture and manufacturing, are the key sectors of our region.

So, what is the current office space situation?

Well, currently about 90 per cent of office space in Lviv is made up of old buildings from Soviet Union times that have been refurbished. The existing office space cannot meet the demands of IT companies, whose employees want to work in modern, well-equipped offices. This seems like a big problem for IT companies.

The construction of the Innovation District IT Park in Lviv was announced in September 2016. What is structure of the project and how will the IT Park respond to the demand for more office space?

Yes, the construction was announced in 2016, together with the IT Cluster, which unites 60 of the largest IT companies. For us, such a close cooperation with the IT Cluster is critically important in order to carry out the project in the best possible way, in a number of areas: the concept, the engineering support and the project’s promotion amongst IT Cluster members.

We are planning to build 110,000 sq. m GLA (gross leasable area) of office space. So far, and within just a few months, we have signed letters of intent for 40,000 sq. m with four companies. We already see that the implementation of the entire project will not meet the demand of IT companies within the next five years, which means that even more space is desperately needed.

You have looked at a number of similar examples such as the High Tech Campus in Eindhoven, Inforpark and Graphisoft in Budapest. What are the key findings from there?

Of course, we have studied progressive experience all over the world. We understand what the main components are which should be included in this project and what will create additional value for it. We have hired Bose International Planning & Architecture to design the concept. The company has a lot of experience in creating urban development projects, including projects for big IT companies such as Amazon.

The project is supported by the City of Lviv and the Lviv IT Cluster. Are you looking for an equity partner and an international developer, now?

Yes, this project has won the wide support of the Lviv Municipality, the IT Cluster and the Ukrainian Government.

However, even though we already have experience in implementing commercial real estate projects, such as Metro, Auchan and our last project shopping centre Forum Lviv which we completed in partnership with Multi Corporation with a loan from the European Bank for Reconstruction and Development (EBRD), we clearly understand that for such a complex project we, as local partner, need to have a powerful equity partner and an international developer beside us.

At the moment we already have preliminary consent from a large European institutional bank which will finance 50 per cent of the project’s value. We have also completed the process of land allocation and have started the process of design, and we are looking for the right partner.

So, what is the timeline of the project?

We expect to open Innovation District IT Park to its residents and clients in 2019.

How can the development of the project contribute to the growth of the IT sector in Lviv?

It is clear that the most important element of the IT Industry is the person. As for today, the salary of IT specialists in different companies in Lviv is at almost the same level and the average is €1,500. It is important therefore that we provide the necessary support to facilitate the growth of that sector.

Taking all that into account, we are creating the IT Park, which will accommodate a university for IT specialists, the Ukrainian Catholic University intends to be part of the IT Park and a hotel. We have already received proposals from hotel chains such as the Marriot, Accor and CarltonRezidor.

Lviv is a western gateway to Ukraine as it is located only about 50 km from the border with the European Union. The city also hosts Central and Eastern Europe’s largest IT conference (IT Arena). We believe that with the support of the Lviv Municipality and the IT Park, Lviv will become the CEE region’s IT hub.

Andrew Pavliv, CEO and co-founder of N-iX and Lviv IT Cluster Chairman

I am confident about the Innovation District IT Park. It is the biggest infrastructure project in Lviv in the last decade and we are happy to join it. The N-iX office will be located in this innovative district in a few years’ time. Why have we signed the contract? We believe that it will help us to develop more dynamically, since there a unique ecosystem for the successful development of business and technologies will be formed, there. Another reason is that we focus, not only on our own development, but also on the development of the IT industry in Lviv, which is why we want to contribute to building this ecosystem.

Our company values an innovative approach to work. This is the main reason why we have decided to join the Innovation District IT Park. We see respect for business partners, responsibility and most importantly — a global goal, here. This is proof of the development of Lviv’s IT industry and provides IT companies with a quality space for generating new ideas and cooperation. We believe that working side by side with the talented people, who will work in the IT Park, will contribute to our development and, thanks to that synergy, we will be further investing in the development of IT in general.

The IT industry in Lviv is growing annually by several thousands of new employees. This means that all these people need to be accommodated somewhere and provided with a comfortable space to work (IT companies are already renting 71 per cent of the office GLA in Lviv). This new space hast to promote personal and professional growth and to help IT professionals create innovations. The IT Park will be exactly this kind of space. This is why we did not hesitate for a second, when we heard about the possibility of renting offices there. This is where the development of the IT industry will soon be happening and I am confident that GlobalLogic will play an important role in this process.

Günter Verheugen: Populist Politics and Euroscepticism Will Have an Impact on CEE
‘Cosy’ Vilnius Offers a Vibrant Life/Work Mix for its Growing Population
Comment