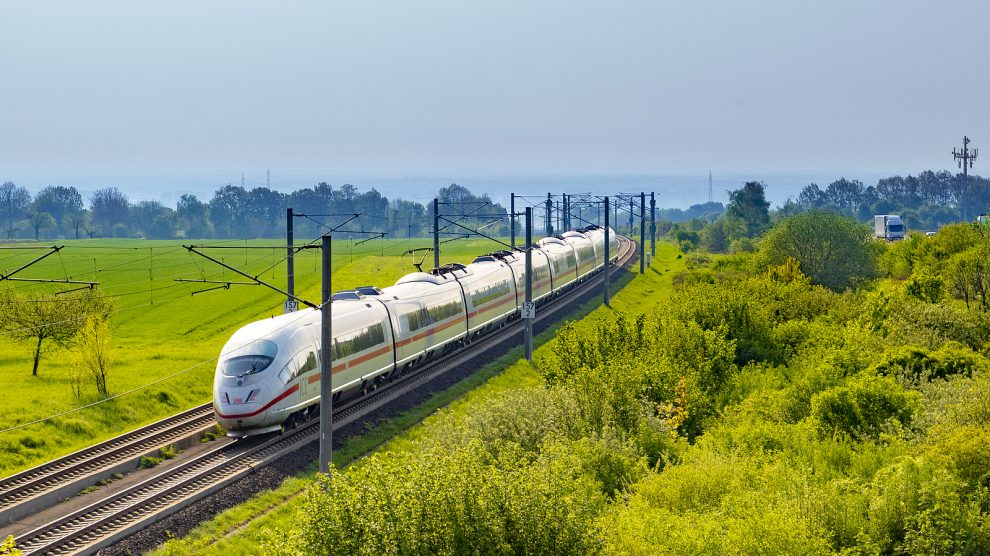 A high-speed rail link between Western and Eastern Europe could make an important contribution to the EU’s climate goals and advance the economic integration of the continent.

In a study first published in 2018, the Vienna Institute for International Economic Studies (wiiw) proposed the construction of what it dubbed a ‘European Silk Road’.

The centrepiece of the proposal is a high-speed railway network that would connect the industrial centres of Western Europe with the less developed East of the continent.

In order to complement its original study, wiiw has now made an analysis of the ecological footprint of such a high-speed railway.

Specifically, the study examines the CO2 savings potential of the proposed core section from Lyon in France to Moscow in Russia, and concludes that such a high-speed train connection could reduce CO2 emissions in the EU by 10 per cent of the emission volume of one year cumulatively over the assumed lifespan of 60 years.

The takes into account the emissions that would be generated during construction, operation and maintenance.

“Even if that doesn’t sound like much, we only looked at the effect of shifting passenger traffic from air to rail,” says Mario Holzner, executive director of wiiw and co-author of the study, who adds, ‘if we also took freight traffic into account, the CO2 reduction from the project would probably be twice as high.”

In addition, transport systems based on cars and planes – in contrast to railways – do not take into account the CO2 emissions for the construction of their infrastructure. Furthermore, the ecological advantages of the proposed high-speed rail link must be considered in combination with the economic ones.

From planes to high-speed trains

Together with co-authors Maximilian Zangl, Katharina Weber and Muhammad Usman Zahid from the Central European University (CEU), Holzner assumes that the construction of such a high-speed line would result in a massive diversion of passenger traffic from planes to the new high-speed trains – especially on the short and medium distances of up to 1,000 kilometres, such as between Paris and Berlin or Berlin and Warsaw, which are particularly problematic for the climate.

“The project could therefore make an important contribution to reducing greenhouse gas emissions in air traffic by at least 10 per cent, as envisaged by the EU,” says Weber.

“To create the maximum CO2 savings, the modal shift from air to rail must be as large as possible,” adds Zangl.

The construction costs of the railway are estimated at around 200 billion euros, with a construction period of at least 10 years.

“Divided over 10 years, this sum, which seems considerable at first glance, is put into perspective when we consider that it amounts to just 1.5 per cent of the EU’s annual economic output. Besides, interest rates on bonds to finance such a project are currently negative,” explains Holzner.

The wiiw concept for a European Silk Road from 2018 estimates that the economic effect of two routes (the Lyon-Moscow route would be the backbone of a European Silk Road, but would be extended along a southern route) with a total investment volume of one trillion euros would see the countries involved grow on average and cumulatively by 3.5 per cent more over 10 years and create two-seven million additional jobs.

The combination of climate protection, economic growth and intelligent large-scale investments in the transport system is also the focus of the Global Gateway, the infrastructure initiative recently launched by the EU.

With 300 billion euros of investments the programme aims to offer poorer countries worldwide an alternative to China’s Belt and Road initiative, through which the People’s Republic has become heavily involved in Eastern and South-Eastern Europe in particular – very often in return for geopolitical influence.

“Here, the EU should make an offer with a European Silk Road in order to push economic integration and climate protection in Europe,” Holzner argues.

However, a European Silk Road would only ever be one element – albeit a central one – of a truly global gateway for the free movement of goods, people and services.

In Holzner’s view the Global Gateway would have to be thought of on a larger scale, especially financially.

Moreover, it should not only be understood as an EU declaration of war on China’s Belt and Road initiative. As he explains: “In many areas, the two initiatives complement each other. The Global Gateway is an additional option for financing urgently needed infrastructure, but it will also facilitate the connection to the Chinese Silk Road.”