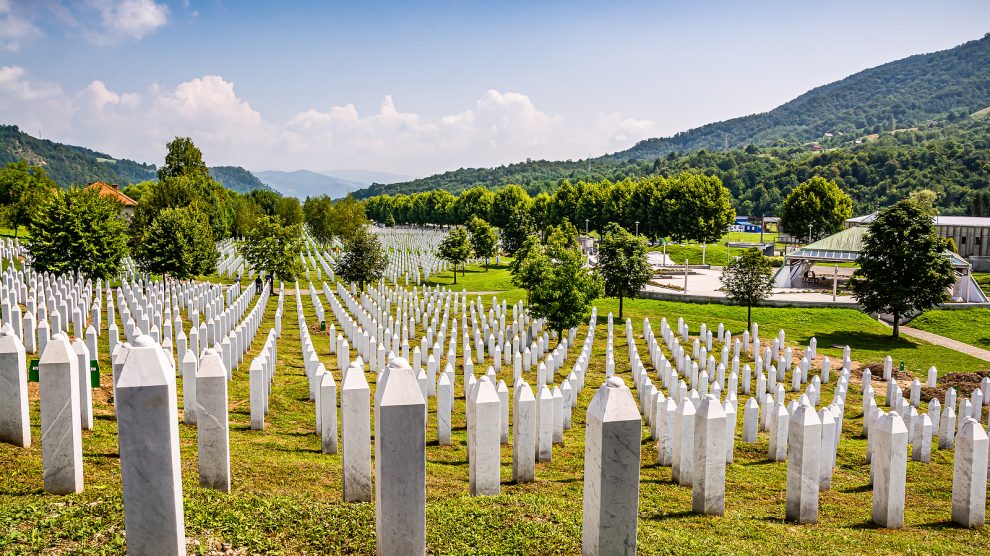 A controversial move by the outgoing High Representative in Bosnia and Herzegovina, Valentin Inzko, which bans the denial of genocide in the country, has triggered yet another political crisis for the already embattled Western Balkan nation.

Genocide denial is now illegal in Bosnia and Herzegovina. On July 23, the Office of the High Representative – which oversees the implementation of the 1995 Dayton Agreement that ended the Bosnian War – amended the criminal law to make genocide denial, as well as glorification of war criminals, an offence punishable with up to five years in prison.

This decision follows several failed attempts – primarily by the Social Democratic party – to enact such a law through the country’s parliamentary assembly.

The move also comes only a month after a court in The Hague declared Bosnian Serb war chief Ratko Mladić guilty of genocide in Srebrenica, where some 8,000 Muslim men and boys were killed in July 1995.

In recent years, the so-called Bonn Powers, which allow the High Representative to adopt such binding decisions when local parties are unable or unwilling to act, have been used sparingly.

There is broad agreement among regional analysts however that Inzko’s move was justified.

“The decision is expected, justified, and probably in the spirit of the modern times. The true question is — is it right to deny genocide and war crimes?,” says Admir Čavalić, an analyst and executive director of Multi Association, a Bosnian civil society group.

Still, the decision caused immediate controversy in the Serb entity of Republika Srpska, where its president Milorad Dodik even threatening to secede from the rest of Bosnia and Herzegovina.

So far, it seems, secession has been moved off the table, but Serbian parties from Republika Srpska have begun a “blockade” of federal institutions by refusing to participate.

The entity’s own parliament has also approved two news laws aimed at blocking the decision of the High Representative.

“Secessionist threats have become a broken record. No one believes them anymore,” Tanja Topić, a political analyst based in Banja Luka tells Emerging Europe.

Nevertheless, Dodik repeated the threat in Belgrade on August 10, this time saying that if a “new Trump” appears, Republika Srpska should declare independence “in the first year”.

According to those opposed to the genocide denial law, such as Dodik, the law marks the entire Serbian people as “genocidal”.

Meanwhile, a petition started by Dodik’s Alliance of Independent Social Democrats (SNSD) aimed at “defending Republika Srpska” has, according to the petition’s website, garnered more than 121,000 signatures.

“This law, that is the amendments to the Criminal Law of Bosnia and Herzegovina, has been misused by politicians in Republika Srpska for dangerous manipulations,” Topić says.

Zijad Bećirović of the Lubljana-based think tank IFIMES sees the true reason for the political kerfuffle as a way of allowing Dodik to mobilise his voter base.

“His politics are based on conflict and division, firstly within the Serbian people and then within Bosnia and Herzegovina, and the constant production of crises is because he doesn’t have any results to boast about when it comes to improving the lives of his citizens,” he tells Emerging Europe.

“Secession is a point that Dodik must not reach. Tendencies toward secession are politically profitable in the Republika Srpska entity but secession itself carries a series of problems that would disturb existing political relations and interests,” Čavalić tells Emerging Europe.

Now that the law has changed, analysts also agree that while it’s highly unlikely to be repealed, its practical application, especially within Republika Srpska, is uncertain.

“The law won’t be struck down, maybe a middle solution will be reached, that would including amending the laws that the assembly of Republika Srpska approved. The problem is that we in Bosnia and Herzegovina are masters of circumventing laws. There were grounds before to punish those who spread hate, but the results were lacking,” explains Topić.

A High Representative with too much power

There are also deep divisions throughout Bosnia and Herzegovina over role of the Office of the High Representative itself, which has been criticised for having too much power.

“There is a need [for it], because of constant blockades and selective interpretations of the Dayton Accords. The Office of the High Representative is the ultimate arbiter of the Dayton Accords and can eliminate any blockages. As long as conditions for EU membership are not met, the High Respresentative will have its role in Bosnia and Herzegovina,” explains Bećirović.

However, Inzko’s decision has plunged the country into a new period of political uncertainty.

“We have witnessed the genesis of severe legal insecurity, with the newly adopted amendments to criminal laws at the federal and entity levels that are mutually exclusive. At this moment, it is hard to see how the new articles of either of the two criminal laws could be put into practice, as this could prove to be too costly for both sides,” Šterić says.

Long term, the impact could be seen as a precedent for wider use of the far-reaching Bonn powers.

“However, with the disputed legitimacy of the High Representative Office, it is very likely that any such attempt could drive Bosnia and Herzegovina into an even deeper political crisis,” Šterić concludes.