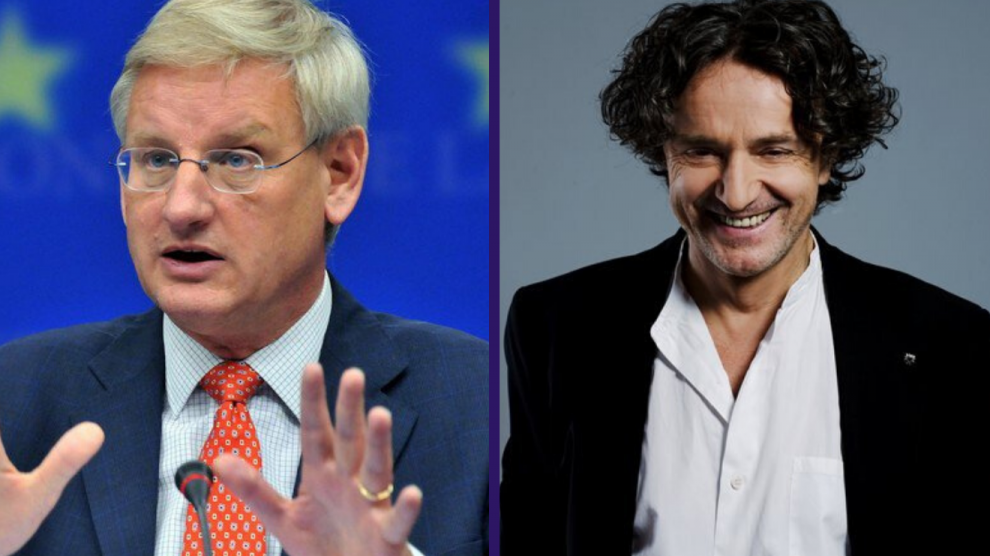 Mr Bildt has been handed the Professor Günter Verheugen Award, which recognises the work of those born outside of the emerging Europe region for their work within it, while Mr Bregović, one of emerging Europe’s best-known modern musicians and composers, takes the Princess Marina Sturdza Award, which rewards those born within the region for their work promoting it worldwide.

“The award is recognition for Prime Minister Bildt’s work during the Balkan wars, especially in Bosnia and Herzegovina, and in Kosovo,” said Andrew Wrobel, Emerging Europe’s founding partner, on behalf of the Emerging Europe Council, which chose the laureates, and whose members include leading opinion formers, senior business executives, scholars, former senior representatives of international organisations, civil society and the world of diplomacy and art.

“The award also recognises Mr Bildt’s advocacy of Ukraine’s territorial integrity ever since it was invaded by Russia in 2014. Throughout his career he has been a staunch, tireless defender of democracy and the rule of law, a voice of reason and decency in a world increasingly the realm of populists.”

In reference to Goran Bregović, Mr Wrobel added: “Throughout his career, Goran has made use of his gifts to provide a soundtrack to a much troubled region that has resounded far beyond the Balkans, and which has created a prism of sound through which those of us from outside the region have been able to better comprehend its past, present and future. His work with other artists such as Sezen Aksu, Kayah, Iggy Pop, Šaban Bajramović, George Dalaras and Cesária Évora – amongst others – has been important in connecting cultures around the world.”

The then Prime Minister of Greece, Alexis Tsipras, and his counterpart from North Macedonia, Zoran Zaev, jointly received the Professor Günter Verheugen Award for demonstrating that “common sense and European spirit can overcome the most difficult burdens of the past”, in ending the almost three-decade-long dispute over the use of the term Macedonia and opening the way towards good neighbourly relations and facilitating the process of EU integration for the whole Western Balkan region.

The third edition of the Emerging Europe Awards, showcasing the best of the emerging Europe region: individuals, public and private organisations as well as projects and initiatives, had been scheduled to take place on June 25 at the European Parliament in Brussels. Due the Covid-19 pandemic, winners are being announced digitally.

This year’s laureates already include the European Public Prosecutor Laura Codruţa Kövesi, named as Emerging Europe’s Public Figure of the Year at the end of April, and the city of Budapest, chosen the most business-friendly city in the region in a survey carried out by over 50 site selection experts and FDI advisers.