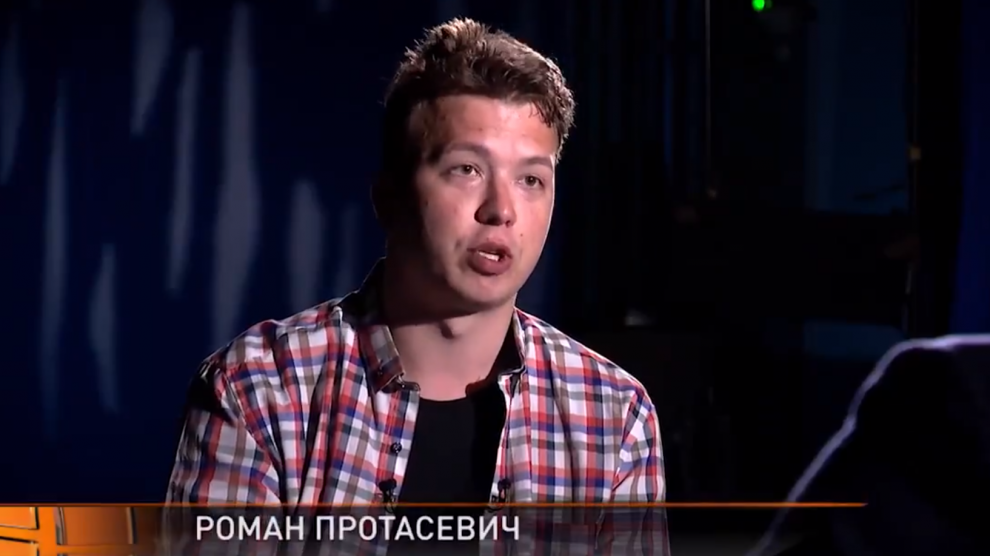 Belarus journalist Roman Protasevich, who was arrested last month after his Ryaniar flight from Athens to Vilnius was forced to land in Minsk, has appeared on television where he confessed to plotting anti-government protests.

In a tearful interview that his family say was conducted under duress, Protasevich praised Belarusian dictator Alexander Lukashenko and admitted attempting to topple him.

He said that while he had criticised Lukashenko in the past, he had begun to understand “that he was doing the right thing and I certainly respect him”.

At the end of the interview, Protasevich burst into tears and said he hoped one day to marry and have children.

However, with marks visible on his wrists, human rights and opposition campaigners say he has been tortured.

“It is horrible to think of the brutality that Belarus security forces must have used to force Roman Protasevich to make this video. It should be Exhibit A in a prosecution for torture and ill treatment under President Lukashenko,” said Kenneth Roth from the advocacy group Human Rights Watch.

“The TV interviewer as torturer. When Lukashenko falls, this goon skewering poor Roman Protasevich must end up in The Hague. Who is he? Where does he live? Has he a villa in the south of France?”

The journalist’s father said that it pained him to watch the interview.

“I know my son very well and I believe that he would never say such things. They broke him and forced him to say what was needed,” Dmitry Protasevich told the AFP news agency.

Protasevich was seized by Belarusian security services on May 23 when a Ryanair plane flying from Athens to Vilnius was forcibly diverted to Minsk when over Belarusian airspace in what has been called a state-sponsored hijacking.

Both Protasevich and his girlfriend, Sofia Sapega, a Russian citizen, were arrested on arrival in the Belarusian capital.

Protasevich, a former editor of the highly influential Telegram channel Nexta, was wanted in Belarus for his role in organising last year’s protests against the country’s dictator, Alexander Lukashenko. Nexta was one of the key channels used by opposition protesters to mobilise support against Lukashenko following a rigged presidential election last August which the dictator claimed to have won with an implausible 80 per cent of the vote.

In November, Belarus placed Protasevich on a terrorist watchlist and charged him with three protest-related crimes. He faces up to 15 years in prison if convicted.

Their arrests prompted the European Union to last month agree on sanctions on Belarus, including banning the country’s airlines from using the bloc’s airspace and airports. Sanctions have also been placed on officials linked to the flight’s diversion.

The most recent interview was Protasevich’s third appearance on Belarusian state television since he was detained.

Earlier this week, another Belarusian opposition activist, Stepan Latypov, stabbed himself in the throat with a pen during a court hearing after claiming that investigators had threatened to prosecute his family and neighbours if he did not plead guilty.

According to the Belarusian Health Ministry, Latypov – who like Protasevich is facing charges that include inciting social unrest – is in a stable condition in hospital.