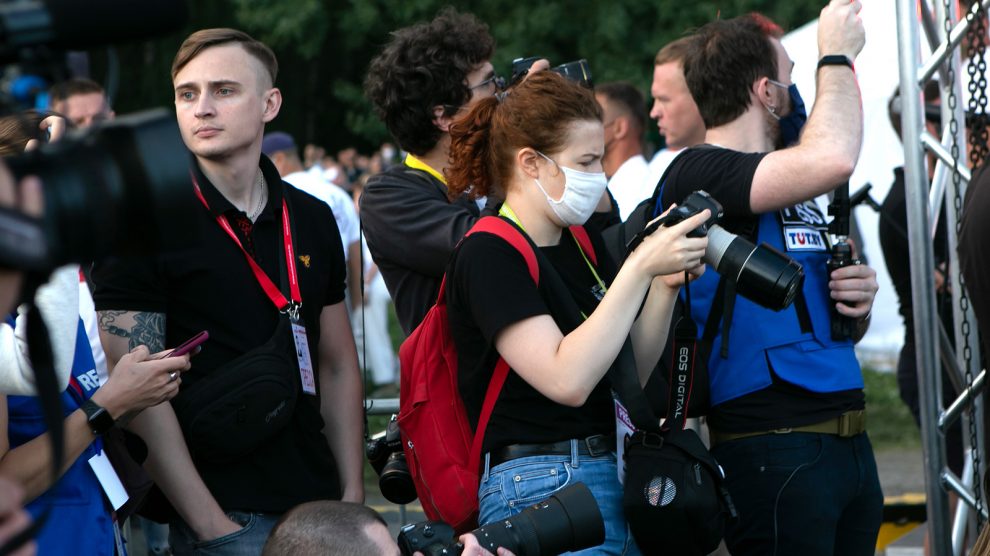 Authorities in Belarus this week intensified their repression of independent media, shutting down the country’s largest news portal, TUT.by.

The largest and most influential independent news portal in Belarus, TUT.by, has been shut down by the country’s authorities in their latest crackdown on journalists in the country.

TUT.by said law enforcement officials had visited its offices around the country on May 18, seizing computers, telephones and bank cards.

According to Kirill Voloshin, one of the online portal’s founders, several TUT.by journalists and administrative staff were arrested in the raids, including editor-in-chief Marina Zolotova and accountant Angela Assad. Arrests were also made at the firm that hosted TUT.by’s website.

The Belarusian authorities justified the raid by saying that a criminal case had been opened against unspecified TUT.by staff on suspicion of tax evasion.

In a statement, the Belarusian Ministry of Information confirmed that they had restricted access to TUT.by following an order from the country’s general prosecutor.

“The general prosecutor’s office has established numerous facts of violations of the law in terms of posting prohibited information in a number of publications on the TUT.by website.

This information was said to include content about the “unregistered” BYSOL foundation, which aims to support victims of repression in the country.

“It is prohibited to disseminate information on Internet resources on behalf of organisations that have not undergone state registration in the prescribed manner,” the ministry said.

TUT.by attracts millions of unique visitors each day and has been a key source of independent information about the mass protests and subsequent repression in Belarus that followed a disputed presidential last August. Many of the photos documenting the protests that appeared in the international press were taken by TUT.by staff.

Alexander Lukashenko, who has ruled Belarus since 1994, claims to have won last year’s election with an unlikely 80 per cent of the vote. By most objective measures, however, Svetlana Tikhanovskaya, an opposition candidate, was the election’s real winner. Tikhanovskaya has been forced into exile in Lithuania, while most of her campaign team has been imprisoned. Her husband, Sergei Tikhanovsky, a prominent YouTuber, also remains under arrest.

Tikhanovskaya condemned the closure of TUT.by and called on the international community to provide support for Belarus’ embattled independent journalists.

“Action needed now!”, she wrote on Twitter. “The repressions against leading news portal @tutby are a clear attempt to destroy the remains of independent media in Belarus, which bravely covers the brutal reality and the situation on the ground.”

Latvian Foreign Minister Edgars Rinkēvičs has led the international condemnation of the raid.

“I condemn the blocking of independent Belarusian news media TUT.by and repressions against its staff. This is unacceptable and contrary to the international obligations of Belarus. I call on authorities in Minsk to resume work of the site and to stop harassment of journalists,” he said.

The New York-based Committee to Protect Journalists (CPJ) meanwhile said that the real motive behind the raid is to censor Belarus’ premier independent news website out of fear of its reporting.

“The authorities must release all TUT.by employees immediately and without charge, and should allow the outlet to work freely,” said Gulnoza Said, CPJ’s Europe and Central Asia programme coordinator.

The European Union delegation to Belarus wrote on its Facebook account that TUT.by is a “flagship of Belarusian journalism” and that “freedom of the media must be upheld.”

According to the Belarusian Association of Journalists, 16 journalists in Belarus are currently behind bars. The organisation has additionally logged nearly 430 arrests of journalists and 65 cases of serious physical violence against journalists since last August’s election.

In February, Daria Chultsova and Katerina Bakhvalova of the Polish-based opposition television channel Belsat were each sentenced to two years in prison on charges of fomenting unrest while covering the protests that followed the presidential election.

Reporters Without Borders ranked Belarus 158th out of 180 countries on its Press Freedom Index for 2021, and has cited several cases of torture and inhumane treatment against journalists while in detention.