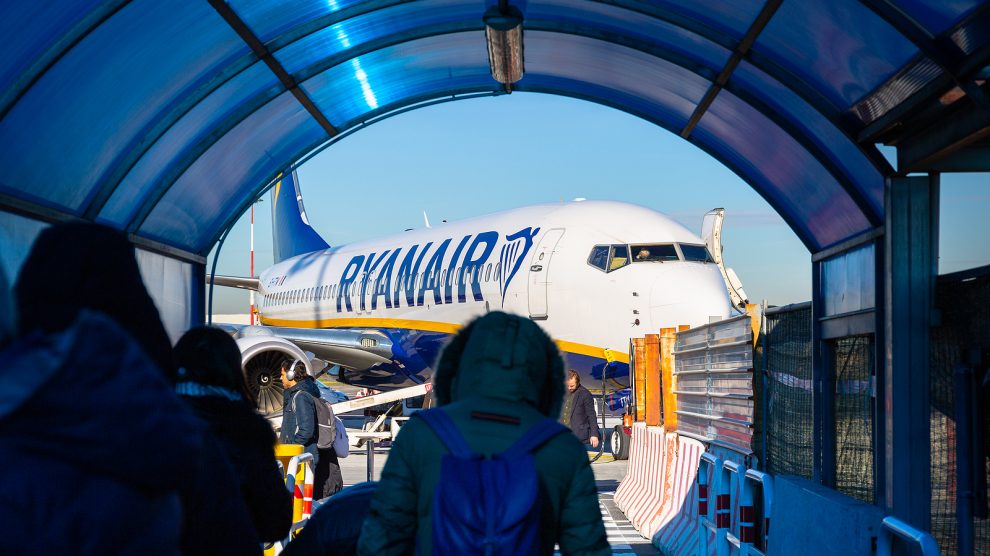 The hijacking by Belarus on May 23 of a Ryanair flight from Athens to Vilnius did not come as a surprise to defence ministries across the Black Sea region. Except for Romania, it seems.

Romania’s Minister of Defence Nicolae Ciucă has admitted that while the forced downing of the Ryanair plane by Belarus had been “unacceptable, a hijacking of a plane flying from one European Union country to another”, the event had come as something of a surprise.

“Personally, I was not expecting this kind of event to happen in 2021,” said Ciucă, who was speaking in the Romanian capital Bucharest during the Atlantic-Black Sea Security Forum, organised by the Aspen Institute Romania in partnership with the German Marshall Fund of the United States.

Ciucă added, however, that the hijacking should not remain without sanctions.

“It is an attack on our way of life, on democracy,” he said.

In Russia’s immediate neighbourhood, the downing of the plane was less unexpected, and defence ministry officials were quick to point the finger at the Kremlin.

“In Kyiv, [the incident] did not come as a surprise,” said Olha Stefanishyna, Ukraine’s deputy prime minister for European and Euro-Atlantic Integration, adding: “Belarus has already been annexed by Russia, by hybrid measures, just as happened in Crimea.”

“It shows that for Russia and its satellites, international values and rules simply do not apply,” added Stefanishyna,

Lela Chikovani, Georgia’s first deputy minister of defence, who like Stefanishyna said that she had not been surprised, believes that for Russia, the blatant flaunting of international laws was “the norm”.

“The incident was just one more example of how the Kremlin or its satellites act. What it means for Georgia, a country that has also suffered from Russia’s expansionism, both in a conventional and hybrid sense, is that we will continue to advocate for NATO and EU policies that will strengthen the values we all share: democracy, the rule of law, and rule-based order. These need to be enhanced.”

Irakli Beraia, the head of the Georgian parliament’s defence and security committee, agreed.

“The hijacking of the Ryanair flight did not come as a surprise, but it did demonstrate that Russia and its allies have found new ways to meet their objectives.

“Things have to be done, policies implemented, things that will prevent such incidents from occurring in the future,” he added.

Goran Ilioski, the chief of policy and planning at the defence ministry of NATO’s newest member, North Macedonia, said that the downing of the plane was a sign that Russia was becoming “more aggressive”.

“It is clear that Russia is increasing its campaign of destabilisation in the region,” he said, “and this will continue unless there is real action taken. With our inaction, we are saying that the unacceptable is in fact acceptable.”

In order for the region to become more resilient, Defence Minister Ciucă suggested capacity building within institutions would be crucial. “It’s not easy, it requires a lot of human resources, and making sure that defence budgets are spent smartly.”

“We can’t predict what Russia’s next move will be, but what we do know is that Russia has a masterplan that targets us all. There are still a lot of things that divide us, and we need to show transatlantic unity, especially when it comes to the response to events such as the Ryanair hijacking,” added Olha Stefanishyna.

“The nightmare for autocracies are those countries who have managed to become democracies, such as Ukraine and Georgia. This is the best response we can offer and where our efforts should be concentrated.”

Much like Goran Ilioski, Irakli Beraia suggested that measures taken by the international community so far have not managed to persuade Russia to alter its aggressive approach.

“Core components of Russia’s alarming toolkit are not new, they have been tried and tested in Soviet times, and even in earlier periods of Russian history. There is every indication that Russia will continue to use them even in the post-Putin era.”

Is the Black Sea an integral part of Europe?

Beraia added that NATO and the European Union need to decide if the Black Sea is part of Europe or just, as he puts it, “in the neighbourhood”.

“It is critically important European governments, NATO allies, view the Black Sea region as an integral part of Europe and support policies that promote prosperity and security and stronger efforts that will help Black Sea states resist Russian aggression. Ceding to Russia only encourages aggression and interference in the affairs of NATO and European allies, negatively affecting Euro-Atlantic security.”

In response to the forced downing of the Ryanair flight from Athens to Vilnius on May 23 that led to the arrest of a dissident Belarusian journalist, Roman Protasevich, and his girlfriend Sofia Sapega, EU airlines have been told to avoid Belarusian airspace while the national carrier of Belarus, Belavia, has been barred from accessing the bloc’s airports.

Non-EU members Britain and Ukraine have taken similar action in response to what has been called a “state-sponsored” hijacking.

The ban does appear to be having some impact, with the number of flights departing from the Belarusian capital Minsk now at record lows: just 12 flights were scheduled to take off from Minsk International Airport on June 2, to destinations in Russia, Turkey, Iraq and Armenia.

József Váradi told Reuters: “I don’t think this is the right response. I don’t think aviation should be used as a means for political sanctions.”

“Nothing has happened that would have jeopardised flight safety or security. I don’t think anyone was unsafe for a second,” Váradi said. “It’s a political measure. This is not a safety measure.”