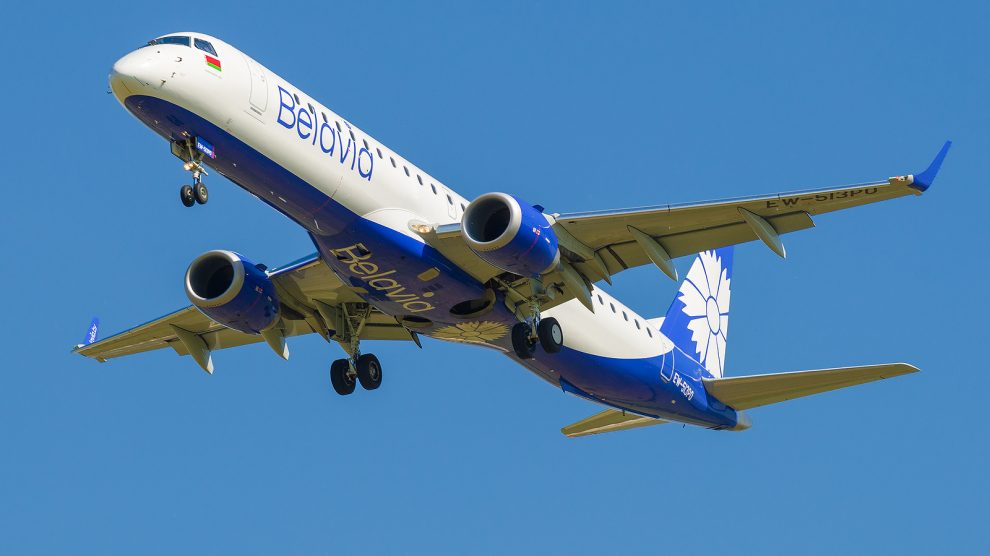 As Russia opens a new front in its ongoing hybrid war with the West, Belarus’ national airline is caught in the crosshairs.

The European Union told its airlines this week to avoid Belarusian airspace and has banned Belavia from its skies and airports after the hijacking last Sunday of a Ryanair flight and the subsequent arrest of journalist Roman Protasevich and his Russian girlfriend, Sofia Sapega.

The move could cripple Belavia, Belarus’ national carrier. According to ch-aviation data, in 2020 its total revenues were 163 million euros, down approximately 40 per cent compared to 2019. At the end of 2020, Belavia incurred a net loss of over 29 million euros.

The carrier employs 1,908 people, with a fleet consisting of 29 aircraft. Established in 1996, it runs 516 flights a week, offering a total of 61,500 places on board its planes. Its most important route is Minsk – Moscow Domodedovo, which accounts for almost 12 per cent of total seat capacity.

Lufthansa, Air France, LOT, Singapore Airlines, Finnair and airBaltic have all so far announced that they will stop flying over Belarus.

In the early afternoon of May 26, Polish media circulated screenshots from the FlightRadar website, showing a Belavia flight to Barcelona making circles near the Polish border. The plane finally returned to its home airport. In the evening, the Polish government formally announced that it had decided to close its airspace to the Belarusian carrier.

European air traffic control agency Eurocontrol said around 400 civilian planes usually fly over Belarus every day, including 300 overflights of which about 100 are operated by EU or British carriers.

Long-haul flights between Asia and Europe – including those by Aeroflot, Air China and Turkish Airlines – that have been using Belarusian airspace are expected to be less affected.

For shorter flights within Europe, re-routing through the Baltic states might extend travel times and add to costs.

At stake are overflight fees, which Eurocontrol said amounted to 85 million euros in 2019 for Belarus, and what the country charges for taking off and landing at its airports.

On May 27, Russia retaliated against the EU ban on carriers entering Belarus’ airspace by refusing to grant permission to some European planes flying to Moscow.

Russian aviation authorities forced Austrian Airlines to cancel its flight from Vienna to Moscow. Air France also cancelled its Paris-Moscow flight. Both were following a recommendation by the European Union Aviation Safety Agency (EASA). This could lead to countermeasures against the Russian national carrier Aeroflot.

Airlines including British Airways and KLM have, however, been able to use new routes on flights to Moscow.

Meanwhile, the UN’s International Civil Aviation Organisation has agreed to launch a speedy investigation into the Belarus president Alexander Lukashenko’s decision to down Protasevich’s flight.

The 1944 Chicago Convention establishes common rules of aviation safety and details the rights of its signatories, of which Belarus is one.

Belarus has been accused of violating its terms by forcing the pilot of the Ryanair flight to land in Minsk using false claims of a bomb onboard.

Lukashenko is currently holding talks in Sochi with Russian counterpart Vladimir Putin. Sapega’s fate is likely to be decided at the meeting, depending on whether Putin intervenes on her behalf, BBC Russia reported on Thursday.

“We have discovered a new weapon of dictators,” Maciej Lasek, a former chairman of the State Commission for Aircraft Accident Investigation (SCAAI), told Polish media.

“The ban on flights to the European Union will be a very big blow to Belavia, for which the EU/Ukraine-Russia transit via Minsk is the main business model,” Dominik Sipiński, aviation analyst at Polityka Insight in Warsaw, told Business Insider.

However, as Anna Maria Dyner from the Polish Institute of International Affairs told news website WP.pl, paradoxically, it is the Russians who can benefit the most from the situation, specifically its national carrier Aeroflot.

“These airlines may be the biggest winners in this situation, because they can take over some of the air traffic between Minsk and other European countries. Maybe it will be necessary to fly through Moscow, maybe Aeroflot will fly from Minsk, and maybe Russian airlines will even buy Belavia,” she said.

“The road to the West may now lead through Moscow,” said Ruslan Szoszyn, a journalist at Polish newspaper Rzeczpospolita. “This is a large corporation, so there is a lot of money at stake. Let us remember that there are no such airlines in Belarus, and the national carrier has a strong monopoly.”

In addition, the economic sanctions imposed on Belarus and the financial losses related to the suspension of air traffic will likely make Lukashenko seek financial aid in Moscow.

“The only problem is that one of the loan tranches that were promised to Belarus last autumn has not yet arrived. Russia has an interest in forcing Belarus to make concessions as much as possible. Of course, Russia also does not care about the collapse of the Belarusian economy,” says Dyner.

Belarus received another blow on May 27 when the European Track Cycling Championships, scheduled to be held in Minsk next month, were cancelled amid the fall-out from the forced diversion of the Ryanair flight and Protasevich’s arrest.

“In light of the current international situation, the Management Board has decided to cancel the 2021 Elite Track European Championships scheduled in Minsk (Belarus) from 23 to 27 June 2021,” the European Cycling Union (UEC) said in a statement.

UEC President Enrico Della Casa added: “We have recently been monitoring the situation with the Belarus Cycling Federation which has now developed into an international debate and today during the management board meeting, we have decided to cancel the event in Minsk.

“We are already working on finding an alternative solution to enable the riders from our 50 National Federations to compete in this season’s continental event.”

Cycling’s European Championships is the second major sporting event to boycott Belarus since protests against Lukashenko began last August following a rigged presidential election he claimed to have won with an implausible 80 per cent of the vote.

Belarus had originally been scheduled to co-host the International Ice Hockey Federation (IIHF) World Championship, currently taking place in Riga, Latvia, but was stripped of its hosting rights following pressure from sponsors in the wake of the violent crackdown against the Belarusian opposition.

Bulgaria will not be moved on North Macedonia EU accession veto
A preview of Slovenia’s EU presidency: Emerging Europe this week
Comment