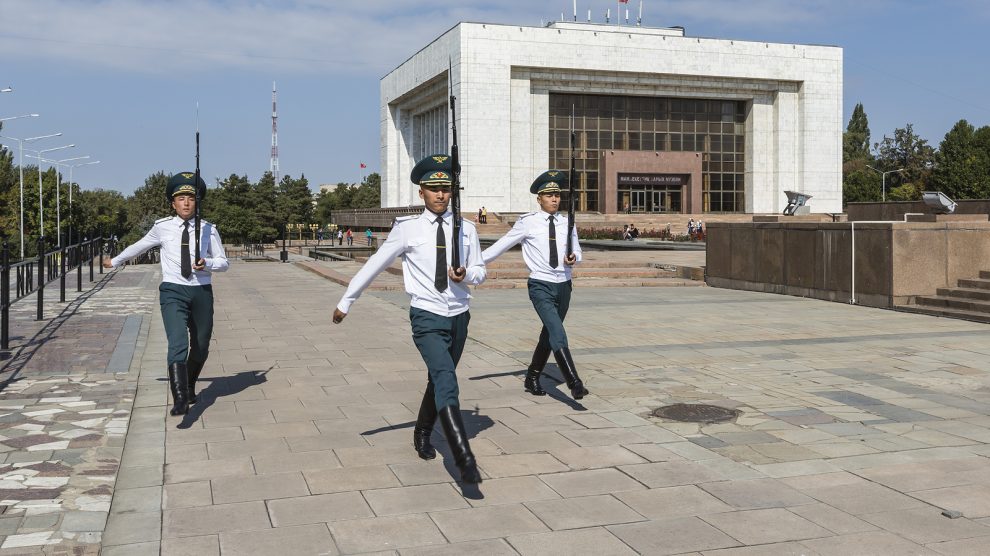 October marks one year since protests against the results of a disputed election in Kyrgyzstan led to the overthrow of the country’s government and promises of a renewed democracy. It hasn’t quite worked out like that.

In October 2020 Kyrgyzstan experienced a political whirlwind after the country’s opposition refused to accept the results of a parliamentary election in which two parties close to the country’s then president, Sooronbai Jeenbekov, won a large majority of seats.

Following a day and night of violent clashes in the capital Bishkek, during which demonstrators broke into the country’s parliament and other government buildings, freeing “political prisoners” – including Sadyr Japarov, a former MP who was serving an 11-year sentence for his role in a kidnapping – Kyrgyzstan’s Central Election Commission annulled the results.

Within days, Japarov had been installed as caretaker prime minister. A week later, following Jeenbekov’s resignation, Japarov assumed the presidency too.

Japarov first came to prominence following Kyrgyzstan’s 2005 Tulip Revolution in which the 15-year rule of Askar Akayev was ended after another disputed parliamentary election. Japarov supported the revolution, and in subsequent elections was elected as an MP.

At 2007’s parliamentary elections, Japarov was on the ballot of the nationalist Ak Jol Party, which won the majority of seats. However, instead of continuing as a parliamentarian, Japarov instead became advisor to President Kurmanbek Bakiyev, who had been elected following the ousting of Akayev two years prior.

Kyrgyzstan again descended into chaos in 2010. Protests began against the Bakiyev government in spring, with demonstrators accusing it of failing to deliver on its promises. Furthermore, rising utility prices and open corruption – much of it linked to Bakiyev and his family – made frustrations spill over. A bloody uprising ensued – the country’s second revolution – after which Bakiyev resigned.

In January 2021, Japarov was confirmed as president following a landslide victory in a presidential election, in which he took almost 79 per cent of the vote.

Since then, Japarov has overseen the installation of an increasingly authoritarian regime in what had hitherto been one Central Asia’s most successful – if turbulent – democracies.

A new constitution – although approved in a referendum in April – has been criticised by Human Rights Watch for undermining human rights and weakening the checks and balances necessary to prevent abuses of power.

It grants the president the power to initiate laws and referendums, something which had previously been the preserve of parliament. The president also now has the right to name the prime minister, to strip MPs of their immunity from criminal prosecution, and reduces the number of MPs from 120 to 90.

An election for the new-look parliament will be held in November.

Ahead of the election, Japarov’s regime has increasingly been targeting Kyrgyz civil society and the opposition.

On August 30, representatives of Reforma, a pro-democracy opposition party, claimed that the country’s police had wiretapped civil activists and opposition politicians.

Klara Sooronkulova, a leader of the Reforma party, posted a message on Facebook claiming that the surveillance primarily targeted individuals who “boldly and openly expressed their opinions and criticised the current state policies”.

On August 31, the Kyrgyz Ministry of Internal Affairs admitted that it had tracked phones for a month from January 6 to February 10.

However, the ministry claimed that phones had been only tapped as part of an investigation into the political turmoil of the previous October, claiming that its actions had been lawful, having been approved by district court in Bishkek.

Nevertheless, all of the politicians whose phones had been tapped were critical of the government, including the leader of the Social Democratic party, Temirlan Sultanbekov, and former presidential candidates Kursan Asanov and Abdil Segizbaev.

Anna Jordanova, a research fellow at the Association for International Affairs, a Prague-based think tank, says that although judges approved the wiretaps, the independence of the judiciary in Kyrgyzstan remains highly questionable.

“The pressure of the current regime against activists shall be examined within the framework of a wider struggle for power among various factions within Kyrgyzstan, as well as the efforts of Japarov’s administration to secure and strengthen its position,” she tells Emerging Europe.

Urmat Djanybaev, an activist, says that instead of building open governance, Japarov has “reverted to a time of Stalinist repression”.

Wiretapping is not the method being used to stifle dissent.

Civil activists believe that the law – which gives the government the power to control the availability of information on any internet page – will further undermine freedom of speech on the internet and suppress critical opinions of the government.

While it is as yet unclear which state body will enforce the law, it hands the authorities the power to order network providers to block content containing any information that the government deems “false”.

The pair claimed that the law would help “protect the honour and dignity of people smeared with false claims online”.

However, according to the International Fact-Checking Network (IFCN), the law is identical to Russian legislation, passed in 2014, that restricts the use of information and telecommunication networks.

When the law was brought before parliament in June, it initially failed to secure the votes of enough MPs.

Less than a month later however it was adopted, following a plea from Japarov made at an “informal dinner” with MPs.

According to the Media Policy Institute, a Kyrgyz human rights watchdog, the law is should not have been returned to parliament so soon: MPs are obliged to wait six months before voting again on a bill they have previously rejected.

The country’s independent journalists, human rights advocates and scholars have also become targets of the regime, by way of smears accusing them of spreading “western ideas” and “LGBT propaganda”.

Meanwhile, another bill – this time hindering the work of non-governmental organisations – has also been introduced.

The US Department of State said that it “threatens the ability of non-governmental organisations to improve the lives of citizens and impedes the vital efforts of NGOs to assist the government in its response to the Covid-19 pandemic”.

According to the Media Policy Institute, both new bills have been adopted solely to “protect the authorities from public criticism”.

Anna Jordanova meanwhile says: “any intervention in the freedom of speech by the government shall be widely discussed by the majority of society, supervising bodies (including courts), and their authority must be clearly defined; appealing processes must run quickly. The entire agenda must be open, clear, and understandable. I do not see such conditions in Kyrgyzstan today.

“In the longer perspective, I think Kyrgyzstan is heading towards further instability.”