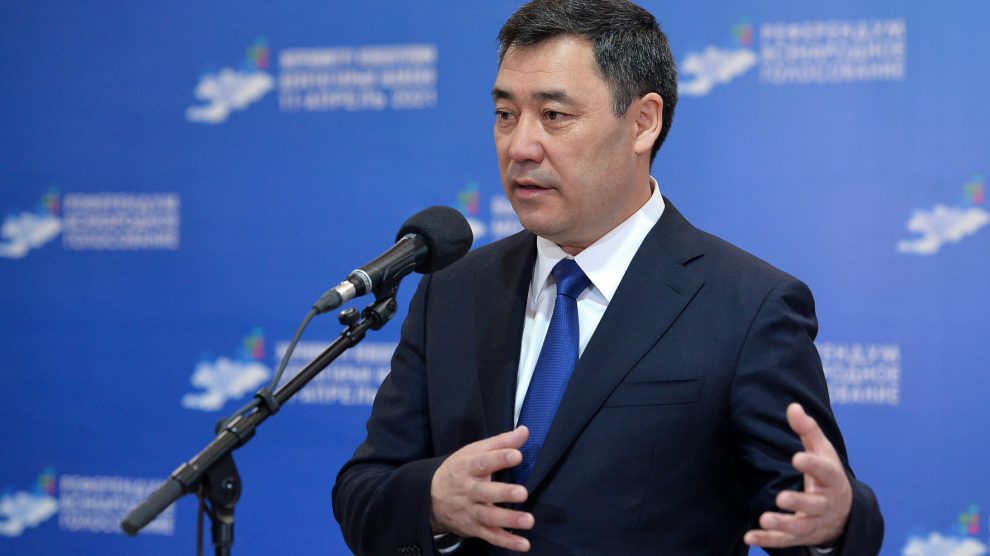 There was never any real doubt as to whether or not Kyrgyz voters would approve a new constitution, proposed by the country’s president Sadyr Japarov, in a referendum on April 11. But will it bring stability?

There was little suspense, and few Kyrgyz voters would have stayed up until late at night on April 11 to find out if the country had approved, via a referendum, a new constitution.

The result was a formality: over 79 per cent of those who voted did so in favour of the constitutional changes. More important was turnout, but at 36.7 per cent, it was comfortably above the 30 per cent threshold required to make the referendum legally-binding.

The outcome is a key victory for the country’s populist leader Sadyr Japarov, who since re-emerging on the political scene in late 2020 has consistently called for an overhaul of the country’s constitution. Critics however warn that the new constitution erodes checks and balances and hands too much power to the president.

They city most frequently Article 70 of the new constitution, which grants the president the power to initiate and veto laws and referendums, actions which had previously been limited to parliament. The president also now has the right to name a prime minister, although nominees will require approval by parliament.

Other provisions of the constitution allow the president, again with the support of parliament, to strip MPs of their immunity from criminal prosecution. Human Rights Watch has claimed that such a provision can lay the ground for the politically-motivated prosecution of parliamentarians who may be critical of the new president. The number of MPs is set to be reduced anyway, from 120 to 90.

Kyrgyz presidents will now be able to serve two five-year terms, as opposed to a single, six-year term. The new constitution also grants power to a new body of government – the national kurultai, a traditional Turkic council of elders or elites with representatives from every part of the country. The kurultai is meant to have a guiding and supervisory role in government, with the authority to suggest removing members of the cabinet and to propose new laws.

An end to instability?

While there were some small-scale protests at polling stations on referendum day, with critics branding the new constitution a khanstitutsiya, a mixture between the words Khan (a title given to rulers in Central Asia) and the Russian word for constitution, the scale of the victory demonstrates that for many Kyrgyz, the transition to a presidential system is seen as a way of ending the political instability which has plagued Kyrgyzstan since independence from the Soviet Union.

Since 2005, there have been three major periods of political unrest = all of which led to the downfall of a government. In the 31 years since independence, Kyrgyzstan has had no fewer than six presidents and 34 prime ministers.

But this is not the first time Kyrgyz have raised the hope of ending instability.

The 2005 Tulip Revolution which ended the autocratic rule of Askar Akayev also brought about widespread optimism for change. However, these hopes were quickly dashed as the government which replaced Akayev succumbed to the same old trappings of corruption, incompetence and economic mismanagement.

In 2010, there was another revolution, which led to the resignation of then-president Kurmanbek Bakiyev and a summer of brutal communal violence between ethnic Kyrgyz and ethnic Uzbeks in the south of the country.

The 2010 revolution begat a new constitution which created a mixed parliamentary-presidential system Kyrgyz have now rejected.

However, this system led to political paralysis and a complete lack of progress on any of the major pressing issues faced by the majority of Kyrgyz – such as unemployment and the rising cost of living.

Edil Baisalov, Kyrgyzstan’s ambassador to the United Kingdom, who participated in drafting the 2010 constitution, laments that “[The 2010 constitution] did not work, it did not deliver. It is our greatest and my personal disappointment that this Kyrgyz dream of building parliamentary democracy failed. It was proven that we are not ready for this.”

Such sentiment reflects the fact that many in Kyrgyzstan believe only strong rule can overcome the tough challenges the country faces.

Critics of the new constitution have also expressed worries about the character of President Japarov.

Branded as a “Kyrgyz Donald Trump”, he had two stints in prison in the 2010s, first for his role in a political rally which turned violent, and second for his alleged involvement in the kidnapping of a state governor. Both incidents were related to Japarov’s campaigns against the Canadian owners of the Kumtor mine, Kyrgyzstan’s largest gold mine.

Furthermore, Japarov has been accused of being close to Kyrgyz nationalists. He was present in Osh during violent sectarian riots in 2010 and some accuse him of actively encouraging ethnic Kyrgyz to attack Uzbeks. Japarov denies these accusations, claiming that he had been in Osh at the time only to defuse tensions.

Despite his imprisonment, Japarov retained widespread popularity. In Kyrgyzstan’s most recent revolution last October, where protesters rejected the results of parliamentary elections, he was broken out of jail by loyal supporters while serving his 11 and a half year sentence on kidnapping charges.

In January 2021, Kyrgyzstan held early presidential elections following the resignation of Sooronbay Jeenbekov. Japarov won a landslide, claiming 79.2 per cent of the votes (very close, coincidentally no doubt, to the percentage of voters who approved the new constitution).

April 11’s referendum confirms Japarov’s popularity and gives him a mandate to implement his plans. A recent poll by the International Republican Institute found that 70 per cent of people surveyed between February and March believed Kyrgyzstan was headed in a positive direction, compared to just 41 per cent who said the same thing last August, before the latest revolution.

It remains to be seen whether their faith in Japarov will pay off. Although the revolutions of 2005 and 2010 ended in disappointment – both in terms of securing economic prosperity and establishing western-style liberal democracy – Kyrgyz appear to be more optimistic than ever.

For most politicians, such optimism is priceless. Japarov would do well not to spend his political capital too quickly.