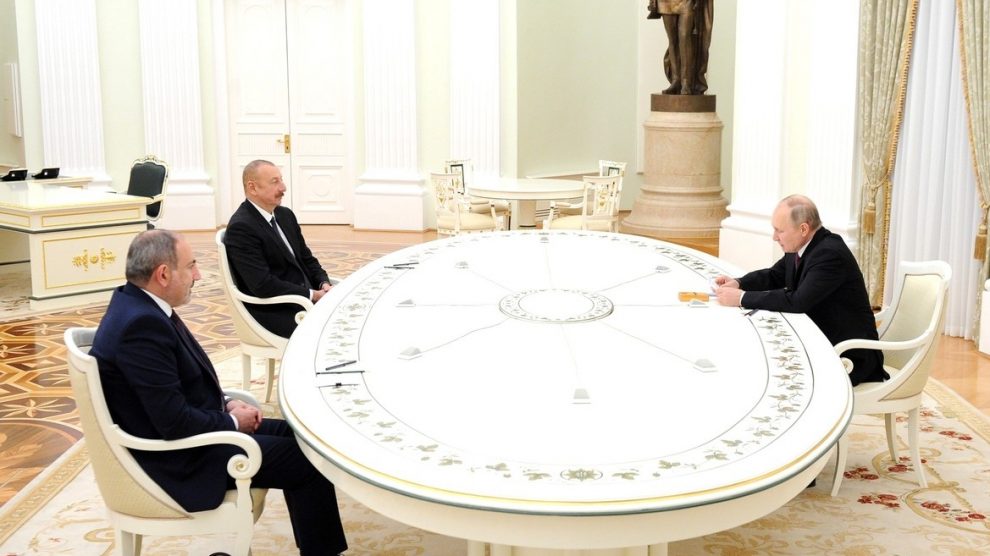 The leaders of Armenian and Azeri met in Moscow on January 11 for the first time since end of Nagorno-Karabakh conflict, but agreed little.

The leaders of Armenia and Azerbaijan have agreed to work together to develop Nagorno-Karabakh following decades of conflict, but have failed to resolve key challenges that could threaten the success of a Russia-brokered peace deal in the disputed region.

Mr Aliyev said that Azerbaijan would have a rail link with Nakhchivan, an Azeri exclave that borders Turkey and Iran, for the first time in over three decades, and that landlocked Armenia, would – via Azeri territory – get rail links with Russia and Iran.

Lack of progress on humanitarian issues

But the two leaders failed to agree on an exchange of prisoners who remain in captivity following the heavy fighting that erupted between Azerbaijan and Armenia and Armenian-supported forces in the Nagorno-Karabakh region on September 27.

“I am confident that the implementation of the agreement can seriously change the economic potential of our region and substantially enhance its investment appeal. However, I think these economic issues are being complicated by the lack of progress on humanitarian matters, matters linked with the prisoners of war, missing people, and the exchange of bodies,” said Mr Pashinyan.

In the six weeks that followed the outbreak of the war, the two sides exchanged artillery and rocket fire until fighting was concluded with the signing of a Russian-brokered ceasefire agreement on November 9.

Azerbaijani leaders overwhelmingly saw the ceasefire as a major triumph, with President Aliyev describing the agreement as of “historic importance.”

In Armenia, however, the deal was fiercely criticised, sparking widespread protests and calls for the resignation of Mr Pashinyan. Indeed, as Mr Pashinyan left for Moscow on January 11, protesters tried to block his access to Yerevan’s airport.

Amnesty International has accused both Azerbaijan and Armenia of war crimes during the fighting.

Nagorno-Karabakh is internationally recognised as part of Azerbaijan, but ethnic Armenians and Azeris both regard it as part of their historic territory, and fought a much longer war in the 1990s that left tens of thousands dead.

The fighting last year killed an estimated 5,000 people and forced more than 100,000 ethnic Armenians to flee their homes, according to aid groups.

The discussions in Moscow were the first in-person talks between Pashinyan and Aliyev since the fighting ended.