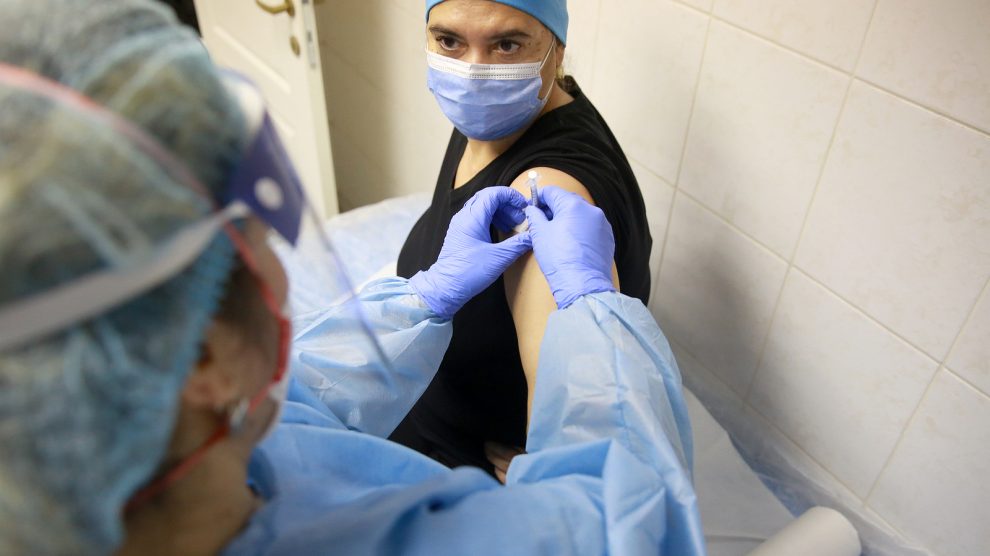 With great fanfare the European Union announced on August 31 that 70 per cent of the bloc’s adults were now fully vaccinated against Covid-19. But the overall figure masks a clear East-West divide.

News that the European Union has met its target of fully vaccinating 70 per cent of its adult population by August 31, some 256 million people, has served only to highlight a clear divide between the eastern and western parts of the bloc.

While several countries in Western Europe, including Belgium, Denmark, Ireland, Malta and Portugal, can now boast vaccine rates well over 80 per cent, in Central and Eastern Europe not one country has met the EU’s target.

The closest to doing so is Hungary where, according to the European Centre for Disease Control (ECDC), 64.9 per cent of the population has been vaccinated.

In Bulgaria, the worst performer in the EU, just 20 per cent have had the jab. Neighbouring Romania, which earlier this week resorted to offering meal vouchers to those willing to get vaccinated, fares only slightly better, at just over 26 per cent, still way behind the EU average.

Announcing that its target had been met, European Commission President Ursula von der Leyen said that it was a sign “the EU’s strategy of moving forward together is paying off”.

“The idea of the EU ‘moving forward together’ is very appealing and I wish it would be true,” says Claudia Postelnicescu, a Romanian lawyer and political consultant.

“Unfortunately, as many other analysts have noticed, this is not the case: not just with Covid-19 but on many issues,” she tells Emerging Europe.

Anamaria Dutceac Segesten, a political scientist and director of Central and Eastern European Studies at Lund University in Sweden, agrees.

“The pandemic, like other crises before it, has divided Europe, and some of the divisions follow the old East-West lines,” she says.

According to Segesten, a recent survey from the European Council on Foreign Relations, a think tank, reveals that eastern Europeans have a very different lived experience of the Covid-19 crisis compared to their western counterparts.

In Hungary and Poland only 35 per cent and 39 per cent of the respondents in the opinion poll respectively say that they have not been affected at all by the pandemic, in contrast to 72 per cent in Denmark and 69 per cent in Germany.

“This split in the way people survived the pandemic is further reflected in the split in their perception of the governmental policies introduced to manage the public health emergency,” Segesten tells Emerging Europe. “In Poland and in Bulgaria, citizens who back the government are in a minority compared to those critical or suspicious of their leaders. This is in stark contrast with the Danes, Swedes and Dutch, to mention just some western Europeans, who trust their governments in large numbers.”

Hesitancy in Central and Eastern Europe – particularly in Romania and Bulgaria – stems from a number of root causes, not the least of which is a long-standing distrust of local authorities, as well as scepticism towards the Covid-19 vaccines, which are regularly labelled by anti-inoculation campaigners in the region as “untested and experimental”.

Influential anti-vaccination figures have also begun to claim that the vaccines simply don’t work, pointing to rising numbers of coronavirus cases in countries where vaccination rates are high while ignoring the fact that few fully-inoculated people actually end up in hospital.

“The media is focused incessantly on the problems of vaccines, not the benefits,” says Postelnicescu. “While people initially considered getting jabbed, now they are reluctant because they no longer trust the media, nor the authorities.”

This is a sentiment echoed by Raluca Mihalache, of the University of Eastern Finland’s Institute of Biomedicene.

“And by chronic, I mean more than half a century of these problems,” she tells Emerging Europe.

“This is one of the most toxic combinations when dealing with public health issues: people are not at all well informed, believe the most bizarre conspiracies, and most of them do not trust the medical establishment.”

Mihalache adds that according to figures from Romanian Ministry of Health, just 60 per cent of healthcare professionals (HCPs) in the country have themselves been vaccinated.

“Last week I read on a group of Romanian nurses who work in the UK that some of them would rather get fired than vaccinated. If this is the situation among Romanian HCPs, one can only imagine the extent of the problem in the general population.”

While Postelnicescu, Segesten and Mihalache all agree that lack of trust is the biggest issue – a “dissolution of trust between people and the political elite, a vacuum of authority and reliable information”, as Postelnicescu puts it – there are also infrastructural deficiencies.

In some eastern EU members, Segesten suggests, people in the countryside have difficulties in accessing regular healthcare, so getting the vaccine to them is far more of a challenge than in western EU states. Other infrastructural differences may also affect access to vaccine, such as being allowed to take time off work to get to vaccination centres, which in the rural areas can be far from home.

According to the World Health Organisation, vaccination rates of at least 97 per cent are necessary for herd immunity to take effect. The European Union as a whole still has a long way to go. The eastern part of the bloc much further.

Mihalache says that for the vaccine laggards, like Romania, even 70 per cent coverage is not realistic.

“I am afraid that Romania will be a reservoir of Covid, because people will simply refuse to get the jab. Now the Ministry of Health is offering financial stimuli for people to get the vaccine, which will only fuel the conspiracies and very likely be a major fail.”

When will Poland’s much-heralded electric car hit the streets?
Will Montenegro have to drop the euro to join the EU?
Comment