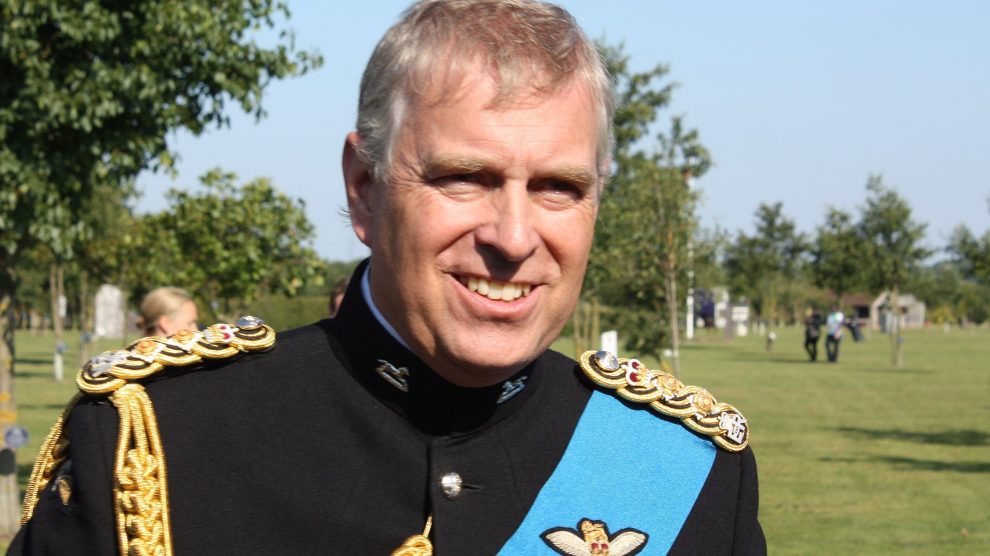 Wanted for questioning by the FBI over his links to the disgraced financier Jeffrey Epstein, dealings with Azerbaijan may in fact be the Achilles heel of the UK’s Prince Andrew.

British businessman David ‘Spotty’ Rowland is not Jeffrey Epstein. But he did share with the deceased and disgraced financier and convicted sex offender a friendship with Prince Andrew, the hapless second son of the Queen of England, currently wanted by the FBI for questioning into Epstein’s alleged paedophile activities.

When Andrew was facing the sack from his role as the UK’s special representative for international trade and investment because of the Epstein scandal, Rowland’s son, Jonathan, suggested their commercial activities continue “under the radar”. Andrew reportedly responded in an email: ‘I like your thinking,’ Bloomberg Businessweek reported.

Like Epstein, Rowland also came to the rescue of Andrew’s ex-wife, the Duchess of York, paying 40,000 UK pounds to help clear her debts.

Rowland and ex-Banque Havilland Chairman Graham Robeson also have ties to the UK Conservative party. Rowland was one of David Cameron’s main backers in the 2010 general election, giving over six million UK pounds. Robeson was honoured for his political work with a 2015 Order of the British Empire (OBE).

Rowland paid 40 million UK pounds a small private bank in Luxembourg, which he renamed Banque Havilland, in 2009 from the ruins of Iceland’s Kaupthing Bank. His plan seems to have been to use Andrew’s network of contacts to tap into emerging markets in Eastern Europe, the Middle East, and Asia.

“Andrew acted as an unofficial door opener for Rowland and his private bank in Luxembourg,” Bloomberg Businessweek reported, based on emails, internal documents, and previously unreported regulatory filings.

Andrew was able to live a lifestyle beyond the reach of his 280,000 UK pounds annual salary from the British taxpayer, while Rowland was able to squeeze through more doors.

Some of Banque Havilland’s clients were so toxic that in 2018 even Luxembourg’s regulator was alarmed and a criminal investigation was launched. It is still ongoing. The probe is looking at the bank’s relationship with the political elite of Azerbaijan, among other things.

Andrew was a frequent visitor to the oil-rich country, while he was the UK’s trade envoy and after, and met President Ilham Aliyev over a dozen times.

According to Bloomberg Businessweek, Rowland accompanied Andrew on a trip to Azerbaijan in 2008 and afterwards emailed a relative of Aliyev’s wife who ran the country’s largest company, Pasha Holding. In 2009, Pasha reportedly routed five million US dollars to an investment fund controlled by the Rowlands that had an account at Banque Havilland.

In 2014, Banque Havilland bought a Bahamas-based bank where Aliyev’s daughters had accounts. They subsequently used one of the accounts to lend money to two companies whose main role seemed to be making loans to the family of Mikhail Gutseriev, the largest shareholder of RussNeft, a Russian oil company, also with interests in Azerbaijan.

Andrew is currently facing potential new revelations stemming from the trial of Ghislaine Maxwell, Epstein’s erstwhile alleged accomplice, but it may be Azerbaijan that proves his Achilles heel.

Photo: Prince Andrew in 2011, during his time as the United Kingdom’s Special Representative for International Trade and Investment. (Thorne1983 via Wikimedia Commons; CC-BY-SA-3.0).