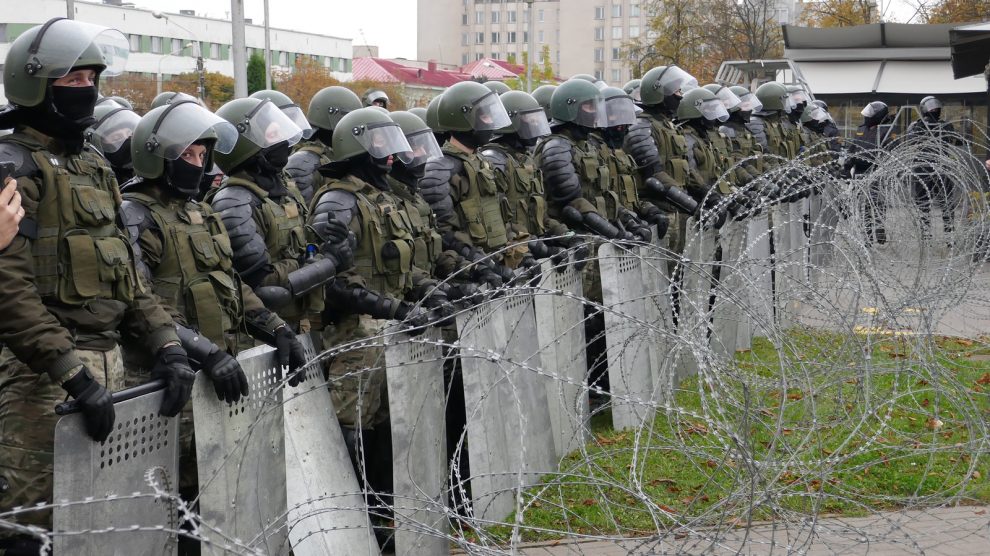 The oldest human rights group in Belarus is facing closure as the country’s authorities step up their crackdown on civil society.

The Belarusian Justice Ministry has filed a lawsuit to dissolve the Belarusian Helsinki Committee (BHC), one of the country’s oldest independent human rights groups, Human Rights Watch said on September 29.

The move is part of wider effort by Belarusian authorities to silence all independent or critical voices in the country.

They also said the lawsuit “violates a number of fundamental rights, including those of freedom of expression and association and due process”.

With representatives in all of Belarus’s six regions, BHC has provided legal consultations for people in Belarus on a wide array of human rights issues. It has engaged extensively with government bodies to improve human rights legislation and practice, on issues including equality and non-discrimination, social and economic rights, business and human rights, free and fair elections, and the death penalty.

“The Belarusian Helsinki Committee has a long record defending a wide range of human rights in the country and has worked with integrity to protect the rights everyone in Belarus,” says Rachel Denber, deputy Europe and Central Asia director at Human Rights Watch.

“The lawsuit is blatant retaliation for the group’s work and is another piece of the effort to annihilate the human rights movement in Belarus.”

In recent months – in response to the mass protests that followed a presidential election last August won, with an implausible 80 per cent of the vote, by incumbent Alexander Lukashenko – Belarusian authorities have taken measures to close more than 200 independent groups.

Some of the country’s most prominent rights groups, including the Belarusian Association of Journalists, Lawtrend, Human Constanta, Office for the Rights of People with Disabilities, and the Belarusian Press Club, have all been forcibly closed.

The ministry’s petition to the Supreme Court, which Human Rights Watch says it has read, said that these discrepancies constitute a “one-time gross violation of the law”. The petition also stated that the documents exposing the discrepancies came to light as part of a criminal investigation but does not provide any information about that investigation.

The letter from international organisations said the move to dissolve the Belarusian Helsinki Committee was “an attempt to impose a draconian, punitive and irreversible penalty to bring about the elimination of a long-standing body of human rights defenders.”

“The Belarusian authorities’ efforts at eviscerating independent groups have been comprehensive, but it is never too late to stop and reverse course,” Denber adds.

“A good place to start is to drop the arbitrary lawsuit against the Belarusian Helsinki Committee.”

Kalesnikava was given the award in recognition of her defiance of the ongoing crackdown in Belarus against pro-democracy activists and human rights groups by Lukashenko.

Kalesnikava started out last summer as the campaign chief of Viktor Babaryko, whose own arrest prevented him from running in a presidential election subsequently won – with an implausible 80 per cent of the vote – by Lukashenko.

Following Babaryko’s arrest, Kalesnikava began working with Svetlana Tikhanovskaya, who decided to run for president after her husband, Sergei Tikhanovsky, was arrested.

Tikhanovskaya and Kalesnikava attracted tens of thousands of people to their pre-election rallies, and by any objective measure Tikhanovskaya comfortably won the presidential election.

Kalesnikava – along with another opposition figure, Maksim Znak – was last month sentenced to 11 years in prison for “attempting to overthrow the constitutional order”.

Also on September 29, the European Commission said it wants to suspend easy access to visas for Belarusian officials in an attempt to deter it from pushing migrants from the Middle East and Africa across its border with Poland, Lithuania and Latvia.

All three EU members have declared states of emergency after a sharp increase in arrivals at their borders with Belarus, accusing Lukashenko, of “hybrid warfare” in seeking to orchestrate a EU migrant crisis.

In an attempt to intensify pressure on the Lukashenko regime, which is already under EU sanctions, the European Commission wants to suspend an agreement that reduces the average cost of a visa to 35 euros and brings down waiting times for government officials, parliamentarians and senior judges, though the scheme would still operate for ordinary Belarusians.

In response, Belarusian Foreign Minister Vladimir Makei insisted that it was the West which was carrying out “a large-scale hybrid war” against Minsk.