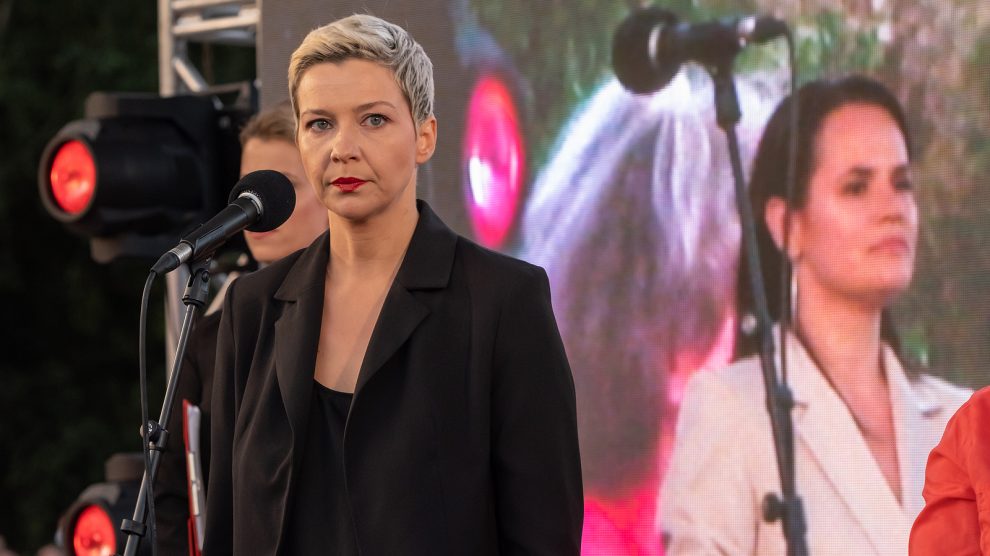 Kalesnikava – along with another opposition figure, Maksim Znak – was last month sentenced to 11 years in prison.

Kalesnikava was given the award in recognition of her defiance of the ongoing crackdown in Belarus against pro-democracy activists and groups by the country’s dictator Alexander Lukashenko.

The prize, worth 60,000 euros was handed to Kalesnikava’s sister Tatsiana Khomich at special ceremony on the opening day of the autumn plenary session of PACE in Strasbourg.

Kalesnikava started out last summer as the campaign chief of Viktor Babaryko, whose own arrest prevented him from running in a presidential election subsequently won – with an implausible 80 per cent of the vote – by Lukashenko.

Following Babaryko’s arrest, Kalesnikava began working with Svetlana Tikhanovskaya, who decided to run for president after her husband, Sergei Tikhanovsky, was arrested.

Tikhanovskaya and Kalesnikava attracted tens of thousands of people to their pre-election rallies, and by any objective measure Tikhanovskaya comfortably won the presidential election.

In the wake of the election and the mass protests that followed, Kalesnikava was abducted in Minsk in September 2020 and made headlines around the world when she tore up her passport at Belarus’s border with Ukraine to prevent her forced removal and exile from Belarus. She was subsequently detained, and last month was sentenced to 11 years in prison for her political activity along with another opposition figure, Maksim Znak.

Accepting the award, Tatsiana Khomich said her sister would want to dedicate her win to all those in Belarus fighting for their rights.

“This award is a sign of solidarity of the entire democratic world with the people of Belarus. It is also a sign to us, Belarusians, that the international community supports us, and that we are on the right track.”

Presenting the award, PACE President Rik Daems, who chaired the selection panel, said: “In standing up against a regime which has chosen force and brutality against peaceful and legitimate protest, Ms Kalesnikava showed that she is ready to risk her own safety for a cause greater than herself – she has shown true courage.”

He added: “Indeed, courageous is the word that I believe best describes all three of our shortlisted candidates. Just like Mr Havel, all have shown a willingness to sacrifice their own safety, their own well-being, and ultimately their own freedom, for a greater cause – the protection of human rights for all. This may be a prize, but it comes at a heavy price.”

Speaking at the Emerging Europe Summit and Awards in Brussels earlier in September, Svetlana Tikhanovskaya – who now lives in exile in Lithuania and was herself named Public Figure of the Year by Emerging Europe – paid special tribute to Kalesnikava.

“Together we showed the world what great power participatory democracy can unleash,” said Tikhanovskaya. “She was sentenced for nothing more than proposing dialogue for the peaceful transfer of power. Now she – as well as my husband Sergei and Maksim Znak – need Europe’s support. They are advocates of democracy and freedom and they need help from Europeans everywhere.”

Tikhanovskaya also repeated her call for more sanctions against the Minsk regime.

“Sanctions work,” she said. “The most important thing for those innocent Belarusians in prison, like Maria, Sergei and Maksim, is that their voices continue to be heard everywhere. The international community must keep Belarus on the agenda. It’s time to show solidarity and assist civil society trying to bring about democratic change.”