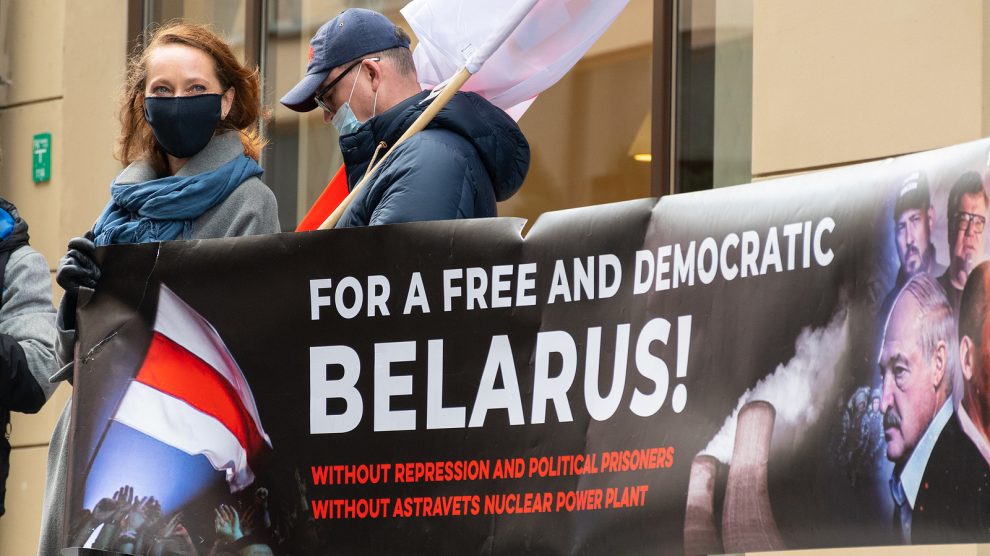 Human rights groups have condemned a new round of arrests in Belarus targeting civil society organisations.

Belarusian authorities carried out a day of massive, unprecedented raids and detentions against the Belarus human rights community on July 14, according to Human Rights Watch (HRW).

Police in at least 10 cities searched homes and offices of the country’s major human rights organisations and their staff, seizing documents, computers, and other devices.

The police detained at least 12 human rights defenders and journalist for interrogation, and at least nine remain in custody. At least three of those targeted told the media that law enforcement officers said the searches were part of a criminal investigation into public order violations linked to mass protests that followed the disputed August 9, 2020 presidential elections.

“For nearly a year since the election and in the months leading up to it, Belarusian authorities have imprisoned, harassed, and threatened hundreds of journalists, activists, and critics,” said Rachel Denber, deputy Europe and Central Asia director at Human Rights Watch.

“But this new spree of raids and detentions takes specific aim at human rights groups, in blatant retaliation for their work documenting the year-long crackdown. All of the activists should be freed immediately, and any bogus charges against them dropped.”

Human rights groups and the media reported that the raids and detentions started in the early morning hours and continued throughout the day in Minsk, Brest, Polotsk, Orsha, and other cities across the country.

Law enforcement specifically targeted Viasna, one of the country’s top independent human rights groups, which has been methodically documenting torture and political persecution since the 2020 vote.

Viasna reported that all but Bialiatski are being held for a 72-hour period. According to HRW, it was unclear how long Bialiatski would be held. Several former Viasna members were also detained, including Yauheniya Babajeva, who is also reportedly being held for 72 hours.

Police also arrested Sergei Matskevich, the head of another civic group, for a 72-hour period, the reports said.

Law enforcement raided groups that work on a wide range of human rights issues, including human rights education, social and economic rights, protection of media workers, freedom of expression online, women’s rights, and the death penalty, and that offer services including pro bono legal defence and legislative analysis. Among them are the Belarusian Helsinki Committee, the Belarusian Association of Journalists, Human Constant, Lawtrend, and Gender Perspectives.

Others whose homes were searched include the head of the Belarus Writers Union, Borys Petrovich, and an independent trade union activist. Police also raided the offices of several political opposition parties.

On July 8, the authorities detained four top staff members from Nasha Niva, one of the country’s oldest independent newspapers. They are Egor Martsinovich, Andrey Skurko, Andrey Dyn’ko, all high-level editors, and Olga Rakovich, the head accountant.

All are being held in connection with a criminal investigation into public order violations, media reported. It is not clear what specific events this investigation relates to. Shortly after Martsinovich’s detention, the authorities called an ambulance for him, because of a head trauma he had sustained during apprehension.

On July 9, law enforcement searched the homes of at least five journalists with various media outlets, and the offices of three additional media outlets in towns and cities throughout the country. Six more searches of journalist targets were conducted on July 13.

In recent months, the European Union, the United States, and other countries have adopted several rounds of sanctions against Belarus in response to its crackdown and widespread violations of fundamental rights. The UN Human Rights Council has adopted several resolutions condemning human rights violations in the country and appointing experts to document it.

“Belarusian authorities are escalating their abuse in the face of international opposition to the tyranny of the past 11 months, and lashing out without boundaries against domestic critics,” Denber said.

“Those responsible, including at the highest level, for this crackdown need to know they will ultimately be held accountable.”

“Over the past 12 months, human rights have been under relentless attack from the government of Alexander Lukashenko,” said Marie Struthers, Amnesty International’s director for Eastern Europe and Central Asia.

“We have long been calling on the international community to respond to allegations of torture, police violence against peaceful protesters, and the pervasive repression which has crushed every possible group of Belarusian society. Today’s massive attack on vital civil society organisations shows that nowhere near enough has been done to end this crisis.

“The Belarusian KGB boasted last week that it was conducting a country-wide operation “to cleanse radicals”, and today we have seen what this looks like on the ground. All those detained today must be released immediately, and this campaign against civil society must end.”

Western Balkans coal plants pollute twice as much as those in the EU
EU proposes bloc-wide ban on the sale of petrol, diesel cars from 2035
Comment