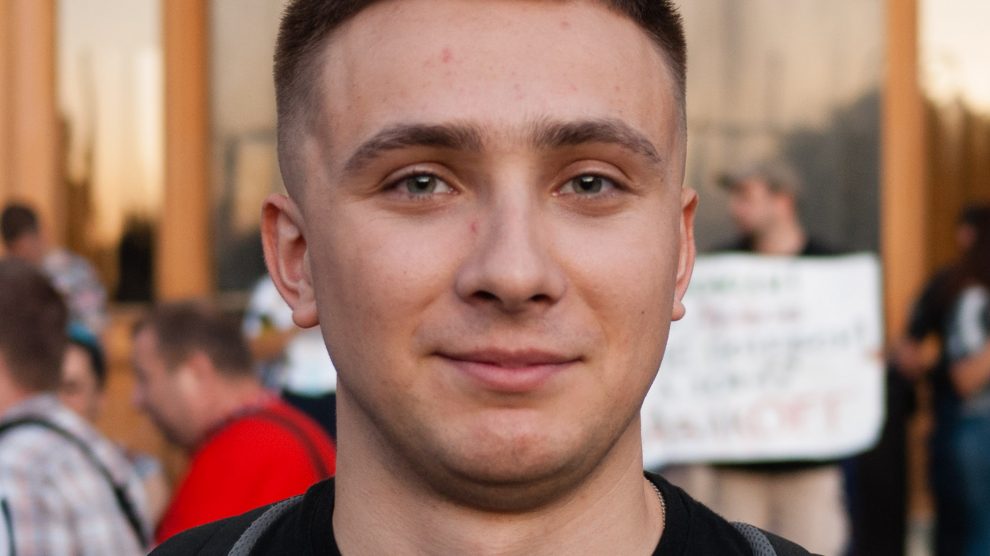 The shaky conviction of a far-right activist in Ukraine has led to accusations that the country is targeting nationalists. Far more likely is that the country’s judicial system is failing all Ukrainians.

On February 23, a court in the Ukrainian city of Odesa sentenced activist Serhiy Sternenko (pictured) to more than seven years in prison on kidnapping and robbery charges.

The sentence sparked protests in at least 15 Ukrainian regional capitals.

Sternenko, a Ukrainian activist and former organiser for the far-right nationalist party Right Sector, was found guilty for the 2015 kidnapping and robbery of Serhiy Shcherbych, an Odesa district councilor.

However, many have called the conviction politically motivated – and there’s good reason to think this.

In a statement released on the day of the verdict, the Ukrainian NGO Anti-Corruption Action Centre said, “A seven year sentence for Serhiy Sternenko is not about justice. It’s revenge on a person who has been a thorn in the side of police, politicians, state officials and property developers in Odesa.”

The judicial process was marred by inconsistencies, irregularities and missteps. The primary evidence for the conviction of Sternenko was the testimony of the alleged victim, an eyewitness (who didn’t appear in court), and cell phone data which allegedly showed Sternenko was in the vicinity of the kidnapping at the time it happened.

The robbery charges were based on the allegation that Sternenko stole 330 hryvnia from the victim – about 15 US dollars in 2015.

These were supported by medical records showing that Shcherbych had been treated for wounds resulting from non-lethal pistol rounds.

Sternenko’s Afghan-born lawyer Masi Nayem said that the prosecution’s case rested “solely on the testimony of the victim and only on the assumptions of the prosecutor”.

Sternenko also alleges that during the investigation, his house was searched by police without his lawyer being present, in breach of Ukrainian law. Additionally, he has questioned the integrity of some of the people involved in his prosecution, including Viktor Popevych, the judge presiding over the case, who had busts of Lenin and Stalin installed in his house.

Finally, the sentence – seven years and three months – seems unusually harsh in Ukraine. This is exacerbated by the fact that the statute of limitations for the kidnapping charge had already expired, leading the judge to focus primarily on the robbery.

Many believe that the amount stolen during the alleged robbery does not warrant kidnapping charges, or a seven-year prison sentence. The whole case has cast doubt about the true extent of the progress made by the Ukrainian judiciary since the Maidan Revolution and validated scepticism about how Ukraine’s justice system operates.

Serhiy Sternenko, 25, was a leader of the Odesa chapter of the far-right, neo-fascist political party, Right Sector. Known for espousing strongly Ukrainian nationalist views, he participated in the Maidan Revolution of 2014. He also participated in the bloody May 2014 clashes in Odesa where 48 pro-Russian protesters died after the building they were sheltering in caught fire – many believe the fire was started by the mob of nationalist protesters which had herded the pro-Russian protesters into Odesa’s Trade Union House.

A cover for thuggery

Like many far-right “activists”, Right Sector’s ideals of independence, democracy and Ukrainian nationalism often appeared to be a cover for thuggery. Much of Sternenko’s “activism” seemed to consist of physical violence against perceived enemies, many of which were documented on his YouTube channel.

In one video, Sternenko and a group of young men attack a priest’s son and damage his car for having an Orthodox Christian symbol superimposed on a 19th-century Russian imperial flag.

The recent conviction wasn’t Sternenko’s first brush with the law. Since 2018, charges have been pending for the killing of a man, who, along with another, attacked Sternenko and his girlfriend. Sternenko claims self-defence – it was the third such attack on him in 2018, and after the first two, police refused to provide him with protection. Furthermore, Sternenko had himself been injured during the attack. This case is still ongoing.

Sternenko also has outstanding cases against him for assaulting a police officer in a riot and for drug smuggling. In 2020, founding member of Right Sector and former Ukrainian MP Andriy Biletskiy claimed that Sternenko had been involved in racketeering in Odesa, connecting him with brothels, drug labs and drug distribution points. Sternenko, who left Right Sector in 2017, denies these charges.

Many view the kidnapping and robbery conviction to be the latest in a litany of attempts at getting rid of Sternenko. He has become a martyr for the Ukrainian opposition and his case has been used as evidence that the administration of Volodymyr Zelensky represents a reversion to pre-Maidan repression.

The whole furor around Sternenko poses many questions about the current state of Ukraine.

The fact that a former member of a fascist party with a history of violent acts is held up as a symbol of Ukrainian democracy can put a dent in the country’s aspirations of being taken seriously as a western-oriented liberal democracy. Furthermore, local and international media whitewash Sternenko’s far-right affiliations – The Kyiv Post, a major English-language newspaper, has described him as a “civic activist with nationalist views”.

This is a reminder of the coverage of Ukraine’s revolution, where international media often glossed over the presence of far-right elements among the predominantly liberal, pro-European protesters. To many, it was the far-right elements who gave momentum to the protests – and many of these ended up volunteering to fight on the frontline of the war against Russia-backed separatists in the east of the country.

However, regardless of Sternenko’s past or present views, the issue remains that his trial appears to have been compromised by political interests.

Judicial reform has been a key pillar of civil society’s demands ever since the Maidan Revolution, but such high-profile cases lend credence to the growing notion that little has changed.

And yet there are also problems with the idea that Ukraine is targeting nationalists for special treatment.

Although Odesa, the city where Sternenko was convicted, is predominantly Russian-speaking, the notion that its officials are all pro-Russian is stretching the truth, to say the least.

For example, nobody has yet been held responsible for the 2014 deaths of 46 pro-Russian protesters in a fire at the Trade Unions House, despite there being videos of Right Sector members throwing Molotov cocktails into the building, and, more disturbingly, clubbing burning victims to death as they escaped the fire.

This points to wider, more general problems with the justice system: that it fails all Ukrainians.

For Ukraine to continue on its path to becoming a democratic nation with functioning institutions and strong rule of law, irregularities such as those seen in the Sternenko case need to be rooted out, for the same reason that incidents like the 2014 Odesa clashes have to be properly investigated.