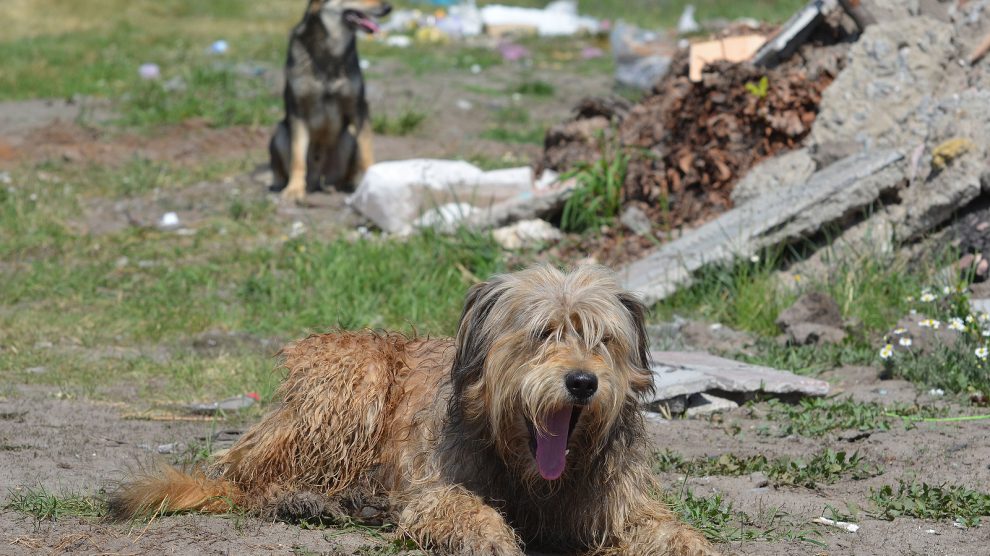 Some countries in emerging Europe have successfully dealt with their stray animal problems. Ukraine still has a long way to go, but technology – including Tinder for cats – is now offering sustainable, and humane, solutions.

Stray animals – primarily dogs – have long been a problem in a number of emerging European countries, risking the health of both people and the animals themselves.

In Ukraine, the total number of stray dogs has been estimated at between 50,000 and 100,000. If the upwards estimates are correct, that is equivalent to what some have suggested could be the total population of stray dogs within the whole of the European Union.

While a high stray dog population can be particularly concerning for locals, tech-savvy Ukrainians have been finding digital solutions to decreasing the number of animals without a home throughout the country – and even abroad.

The threat of feral dogs in Ukraine seems most exacerbated in the Russian-controlled Donbas region, where a large number of dogs are believed to have been abandoned by their owners as they fled from the region as refugees when conflict broke out in 2014. Since then, there have been regular reports of attacks by stray dogs on people and in 2018, a 12-year-old girl was killed by a pack of stray dogs in the small town of Khartsyzsk.

However, the problem is not limited to the war-affected eastern regions of the country, as in the town of Chernivtsi, close to the border with Romania, some medical professionals have approximated that they receive between five and 10 visits related to bites from stray dogs every single day, in a town with a population of just 250,000 people.

Meanwhile, while in cities such as Kyiv and Lviv stray dogs are no longer such as serious problem, there are significant concerns linked to how the issue was resolved, and if the approach taken is sustainable in the long term.

In particular, in the period leading up to Ukraine co-hosting the 2012 UEFA European Football Championship, a number of independent organisations claim that tens of thousands of stray dogs were likely killed in the name of improving public safety, with some locals at the time openly admitting to shooting and poisoning both stray dogs and cats.

Similarly, although on a seemingly smaller scale, in preparation for the 2017 Eurovision Song Contest – held that year in Kyiv –  thousands of dogs were killed by local authorities, according to the Tamara Tarnavska animal rescue organisation.

In 2016, local animal rights advocates were able to secure a grant worth 500,000 euros from the European Union, aimed at finding a more humane approach to decreasing the number of stray animals on the streets, including rabies vaccination efforts, as well as sterilisation (and the training of local vets to perform the procedure, which was very rarely taught in the Soviet Union and other parts of emerging Europe throughout the communist period).

Unfortunately, recent reports point to a large amount of those funds as having been embezzled, hindering progress in resolving the country’s stray animal problem.

Technology to the rescue

Nonetheless, local entrepreneurs have been far from indifferent towards the issue and have come up with a number of innovative ways to address it. One of these is a digital platform that aims to improve the plight of stray animals via the collection data.

Established in 2011 by CEO Viktor Kopach, Animal ID offers many functions, including creating online profiles for stray and adopted animals and their owners, as well as a registration system for institutions such as shelters, veterinary clinics, and dog clubs.

For countries with a stray animal problem, the service allows citizens to keep track of the animals and their condition. The information then becomes visible to local shelters, authorities, and other residents. Animal ID has become one of the most popular platforms of its type, attracting a considerable number of users from 15 different counties as diverse as Greece, Kazakhstan, and Moldova.

The organisation has also found popularity in a number of western countries with its QR pet ID tags. The QR code on the tag leads to an online profile with information about the pet, that can be accessed in case it gets lost.

The service has become so popular in the United States, that Animal ID now has offices not just in Lviv, where it was founded, but also in Dallas, Texas.

Back in Lviv, the widespread use of the Animal ID registration system, as well as the work of other, similar organisations, such as Lev, has also contributed to substantial progress in reducing the number of stray dogs to just 400, which is lower than the population in any other major Ukrainian city.

Lev estimates that it has managed to find a home for over 2,000 dogs over the past three years, while the sterilisation of dogs that remain on the streets has grown from gone from seven to 50 per cent in the same period.

“Compared to Europe, the situation in Lviv is awful. But in comparison with Ukraine as a whole – it is great,” says one of Lev’s volunteers, Ihor Sayko.

In the country’s capital and its surroundings towns and villages, the Kyiv Animal Rescue Group (Karg)  utilises the power of social media not just to find a home for stray animals but also to recruit volunteers who provide 24/7 emergency rescue services for animals who have suffered from living in an urban environment. The self-organised crew of volunteers has attracted attention with the sheer amount of rescue operations they have completed, that range from rescuing stray cats from the trees of Kyiv’s residential neighbourhoods, to beavers stuck in cellars in nearby villages.

Also in Kyiv, Rufat Raimov has found a partial solution to the problem of starving stray animals as well as the capital city’s growing issue of plastic waste: his Yapomoga vending machines turn plastic into a currency that can be exchanged for cat and dog food.

“You can see it yourself that families come here during the weekends. The machine attracts a lot of people. On a weekday, we collect two to three bags of bottles while over the weekend day we collect at least six bags,” says the creator of Yapomoga.

The Wanna Cat rescue and shelter in Kyiv meanwhile is known for its innovative, but also rather unusual approaches to sourcing funds and finding homes for the city’s stray felines, including yoga classes with cats and the opportunity to take a nap with the pampered rescue cats.

The organisation’s latest tactic to encourage adoption, named Kotinder (a combination of the Ukrainian word for cat and the popular online dating application Tinder), allows potential owners to swipe left and right in order to be “matched” with a cat that is looking for a home.

“The tip of the iceberg are the stray dogs, but the real cause are the pet dogs — actually not the dogs themselves, but their owners,” he says, further arguing that the only realistic way to solve the issue entirely would be for spaying and neutering to become more common amongst pet owners.

While animal adoption has in recent years become more widely accepted in Ukraine, according to Animal ID CEO Viktor Kopach, more needs to be done to educate people on how to take proper care of their pets in order to help with decreasing the stray animal populations.

There remain concerns about the continuous appearance of a new stray animal population if owners are not able to take the necessary precautions.

However, Ukrainians’ love for tech solutions has made securing the well-being of stray animals easier, while also encouraging locals to adopt instead of buying pets.