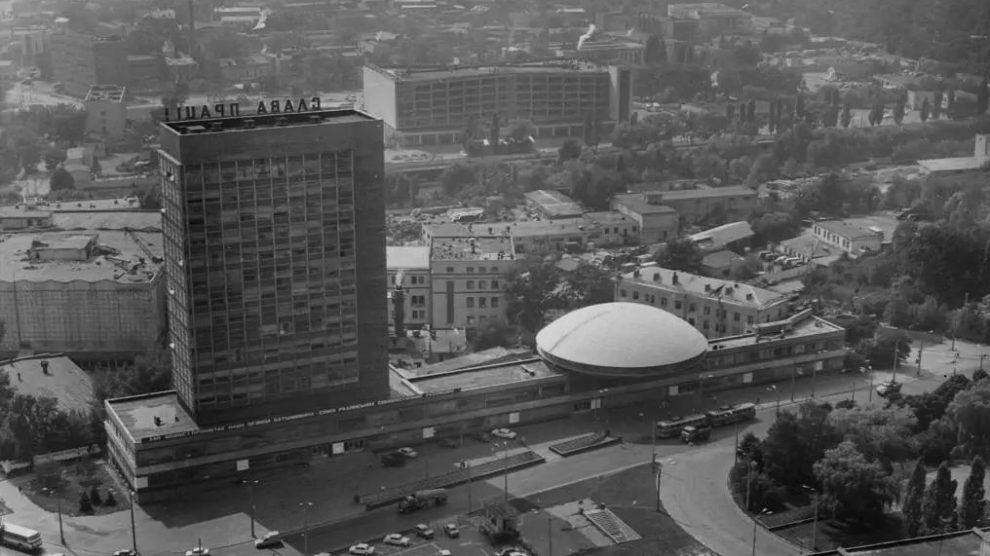 Soviet Modernism is not everyone’s idea of architectural achievement, and its historical legacy – not least in Ukraine – make its preservation controversial. But the importance of recognising a genre that pushed boundaries should not be underestimated.

In downtown Kyiv stands one of the most unique buildings in Ukraine. A massive dome, resembling a UFO, sits atop a two-storey building and hovers imposingly above Antonovycha Street, 10 metres above the pedestrians below. Built in 1971, the building, known as Tarilka (Ukrainian for plate) is a powerful reminder of the architectural legacy of the Soviet Union and its take on modernism.

Tarilka was completed in 1971 to the designs of the Ukrainian artist, composer, poet and architect Florian Yuriev. Originally built to be a concert hall and gallery for innovative art, it now houses Ukraine’s Institute of Scientific and Technological Research. The UFO look of the building is a microcosm of the zeitgeist of the era in which it was built, when humanity made broad and exciting breakthroughs in space exploration.

In its heyday, it was compared to the magnificent UN headquarters in New York. Now, however, these comparisons fall flat. With faded colours and cracks in the walls, today’s Tarilka elicits an odd mix of admiration and sadness, like meeting Adriano Ribeiro after his depression-fueled dramatic career decline.

Ukraine is full of such buildings. Unique, modernist structures that are at once elegant and imposing, practical and creative – and currently falling apart or being actively destroyed, with the blessings of the authorities and a largely ambivalent population.

For some Ukrainians, architecture enthusiasts in particular, such buildings are important elements of cultural heritage and must be preserved. But for others – most, even – these serve as an unwanted reminder of the Soviet era.

Prior to World War II, Soviet architects would usually build in a classicist style. This period saw the creation of grandiose, lavish buildings designed to showcase the might of the Soviet Union. Kyiv is full of this style, with locals referring to buildings constructed in this period as Stalinkas, after the then-Soviet leader.

In 1955, shortly after Stalin’s death, the administration of Nikita Khrushchev put an abrupt end to this style. Lambasting the Stalin-era buildings as inefficient wastes of money and examples of “petit bourgeois consciousness”, Khrushchev sanctioned a more functional, modest style. Thus, Soviet Modernism – or SovMod in characteristically Soviet newspeak – was born. Defined by excessive concrete, geometrical shapes and “substance over style”, this came to be the dominant architectural school until the demise of the Soviet Union.

Post-war priorities were very different for the Soviet Union. The country had only recently been devastated by World War II and immediately after found itself embroiled in an ideological struggle with the most economically powerful nation in the world. Consequently, priorities shifted – from constructing pompous, expensive buildings for propaganda value to practical, functional buildings that could be built quickly and cheaply.

There is scarcely a city in the former Soviet Union which does not bear the imprint of Soviet Modernism. The Uzbek capital of Tashkent in particular is dominated by this style, after it had to be largely rebuilt following a 1966 earthquake.

Slavutych, a city in Ukraine’s Chernihiv Oblast is built almost entirely in this style – the whole city was constructed at breakneck speed for people evacuated from Chernobyl.

Despite working under a totalitarian regime, inefficient bureaucracy and stringent budgets, Soviet architects nonetheless demonstrated remarkable creativity and craftsmanship to construct truly unique edifices. Take the Salyut hotel in Kyiv as an example – the seven-storey cylindrical building looks like something out of a science fiction film.

Although SovMod buildings continue to draw admiration from architectural enthusiasts and aesthetes around the world, many people living in the actual countries that host them are ambivalent at best and actively hostile at worst.

Some find it drab, grey, imposing and ugly. For others, it can be a reminder of the continued relative poverty of their nations, as many SovMod buildings, particularly publicly administered ones, have fallen into disrepair, losing what luster they once had. When contrasting such buildings with the glitzy glass skyscrapers built in the West or the emerging Asian economies, some may feel ashamed of their nations’ relative architectural modesty.

This debate is particularly pervasive in Ukraine. For many Ukrainians, such buildings serve as an unwanted reminder of Soviet rule. Although the early years of communism saw a reversal of Tsarist assimilationist policies in favor of Ukrainisation, with the Ukrainian language enjoying official status in local government institutions for the first time, many Ukrainians view this era as one of cultural suppression. Furthermore, Ukraine took the brunt of the 1932 famine and the Nazi invasion, both extremely painful events for the country.

As such, the Ukrainian government, in its nation-building attempts, has distanced itself as much as possible from the Soviet legacy, particularly since 2014.

World War II victory day is celebrated in a considerably more muted fashion than in most of the former Soviet world. Ukrainian nationalists, many of whom actively collaborated with Nazi Germany and played major roles in the devastation of Ukraine’s Jewish community, have been elevated to national heroes. Soviet-era monuments and mosaics have been bulldozed or built over, unless they hold some kind of universally unopposable values, like Kyiv’s Friendship of the Peoples Arch.

The economic situation exacerbates this threat to the architectural heritage of SovMod. It’s a common sight in any major Ukrainian city to see old, beautiful buildings near the city centre – some dating from pre-revolutionary times – being completely empty and abandoned, waiting for an investor to buy the land, knock the building down and replace it with something profitable and contemporary. The fate of Tarilka can be considered a microcosm of this trend: poorly-maintained, falling apart, flanked on one side by an expensive shopping mall, and on the other by a massive advertising billboard.

Now, however, there is a movement of Ukrainian architects known as Save Kyiv Modernism working to preserve SovMod buildings. Social media has been key to the proliferation of this movement, with Instagram accounts like UkrainianModernism amassing tens of thousands of followers.

In 2019, the book Soviet Modernism, Brutalism and Post-Modernism: Building and Structures in Ukraine 1955-1991 was published by Alex Bykov and Ievgennia Gubkina, along with a short film. These have had a major impact on changing attitudes towards SovMod – now over 70 buildings in Kyiv, including Tarilka and the Salyut hotel are protected by the city administration as elements of Ukrainian heritage.

This is good news for fans of a troublesome but nevertheless important chapter in architectural history.

Why the work of Stanisław Lem is more relevant than ever
Meet Zbaraski, one of the most unique voices on Ukraine’s music scene
Comment