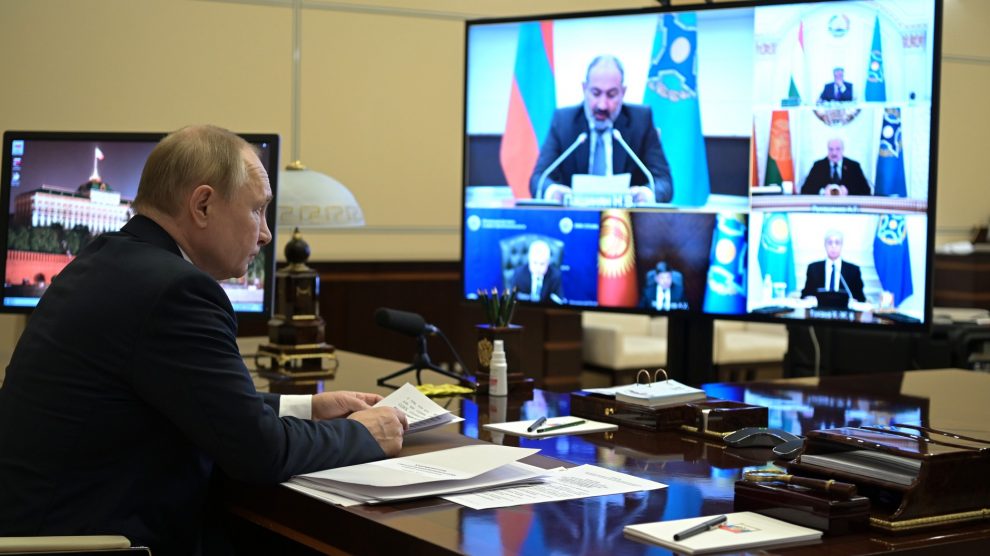 The Moscow-led Collective Security Treaty Organisation (CSTO) has been given a boost by its role in putting down protests in Kazakhstan.

A state of emergency and curfew remain in place across much of Kazakhstan, but by and large calm has returned to the vast country following a week of unrest, triggered by a rise in fuel prices, which quickly grew to become the largest demonstrations the country has witnessed in its three decades of independence.

According to the Kazakh Interior Ministry, up to 8,000 people had been detained as of January 10, while at least 44 have been confirmed killed. This is far lower than a figure of 164 deaths, reported by the Health Ministry on January 9, a number now claimed to have been the result of a “technical error”.

“Today the situation is stabilised in all regions of the country,” Interior Minister Erlan Turgumbayev said, adding however that, “the counterterror operation is continuing in a bid to re-establish order in the country”.

Last week, the Kazakh President Kassym-Jomart Tokayev issued “shoot-to-kill” orders to end the unrest that he blamed on “foreign-trained bandits and terrorists”.

While there has so far been no evidence of foreign involvement in the unrest, the former head of Kazakhstan’s domestic intelligence agency, Karim Masimov, was detained on January 8 suspicion of high treason.

Tokayev later appealed to the Moscow-led Collective Security Treaty Organisation (CSTO) for assistance, which sent troops to Kazakhstan to restore order. It was the first time forces from the CSTO – made up of six former Soviet republics (Armenia, Belarus, Kazakhstan, Kyrgyzstan, Russia, and Tajikistan) – had been deployed to intervene in a member country.

CSTO leaders held a video conference on January 10, during which Tokayev labelled the unrest in Kazakhstan as a coup.

“The main goal was to undermine the constitutional order and to seize power. We are talking about an attempted coup d’état,” he said. He also claimed trained Islamist fighters were involved in the unrest.

According to Tokayev, more than 100 shopping malls and banks were looted during the unrest and about 500 police cars were burned.

“Enormous damage has been caused, which is now being evaluated by a special government commission,” he added, while also saying that the number of people killed must be “clarified”.

Also speaking at the CSTO meeting, Russian President Vladimir Putin repeated claims that events in Kazakhstan had been directed by foreign powers.

“This is not the first and will not be the last attempt at outside interference in the internal affairs of our states,” he told the meeting, adding that, “the measures taken by the CSTO have made it clear that we will not let anyone destabilise the situation in our home and implement so-called colour revolution scenarios”.

Moscow has long dismissed popular uprisings against authoritarian leaders in former Soviet states as “colour” revolutions, a term which dates back to Georgia’s Rose Revolution of 2003 and the Orange Revolution of 2004 in Ukraine.

Putin also said that the CSTO mission in Kazakhstan would be for a “limited time” and that it would be the Kazakh president who would decide when it was no longer needed.

“Then, CSTO forces will leave Kazakhstan,” he said.

When that will be remains unclear, but the CSTO – and its leadership – clearly feels emboldened by its intervention in Kazakhstan.

“We can already draw the most important conclusion that the peacekeeping potential of our organisation has been demonstrated to work can be used for carrying out related tasks,” said CSTO Secretary General Stanislav Zas.

Perhaps the most telling comments at the meeting came from the dictator of Belarus, Alexander Lukashenko, who sent a thinly-disguised warning to Uzbekistan, which withdrew from the CSTO in 2012.

“Lessons should be learnt, first of all by Uzbekistan,” said Lukashenko.

“Too many people want to undermine the situation. We have information that [foreign terrorists] have already set their sights on Uzbekistan.”

The United Nations meanwhile on January 10 confirmed to RFE/RL that armed men seen wearing UN helmets in images shared by the AP news agency were not part of a UN peacekeeping mission.

A spokesperson wrote that “United Nations troop and police contributing countries are to use the UN insignia only when they are performing their mandated tasks as UN peacekeepers, in the context of their deployment within a United Nations peacekeeping operation as mandated by the UN Security Council”.

According to RFE/RL, Kazakhstan’s military does have a United Nations-backed unit of English-speaking peacekeepers known as KAZBAT who are authorised to wear blue UN helmets, but only while on parade or during a UN peacekeeping mission.