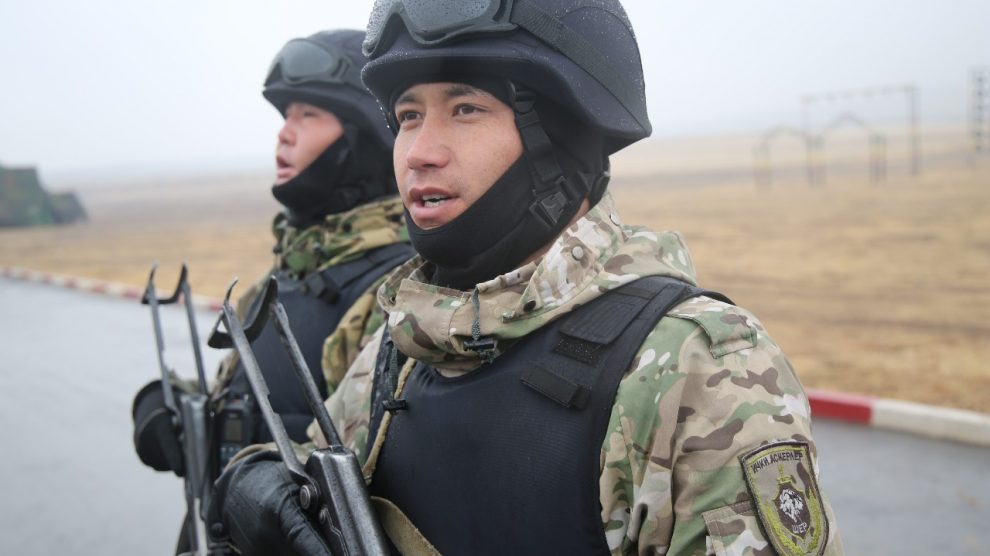 When a plane carrying CSTO forces arrived in Kazakhstan late on January 5, it was the first time that the alliance had deployed forces to intervene in a conflict in a member country.

It took little more than a few days of demonstrations against a hike in the price of liquefied petroleum gas (LPG) for Kazakhstan’s President Kassym-Jomart Tokayev to send a very public appeal for help to the Collective Security Treaty Organisation (CSTO), a Moscow-led alliance of six former Soviet republics (Armenia, Belarus, Kazakhstan, Kyrgyzstan, Russia, and Tajikistan) first created in 1992.

Within hours, Moscow had responded the call, dispatching a mix of Russian and Belarusian forces to Kazakhstan, joined by a token contingent of Armenian and Tajik troops. Kyrgyzstan has yet to decide if it will take part: public opinion in the country appears to be heavily opposed to intervention, and there were protests in the capital Bishkek on January 6 against any Kyrgyz involvement.

When the first plane carrying CSTO forces arrived in Kazakhstan late on January 5, it was the first time that the alliance, which grew out of the framework of the Commonwealth of Independent States, and first began as the CIS Collective Security Treaty (CST), had deployed forces to intervene in a conflict in a member country.

But it was not the first time that it had been asked.

Article 4 of the CSTO charter states that: “In the case of aggression (an armed attack threatening safety, stability, territorial integrity and sovereignty) against any member state, all other member states at request of this member state shall immediately provide the latter with the necessary aid, including military.”

In June 2010, when clashes broke out between ethnic Kyrgyz and Uzbeks in southern Kyrgyzstan, several Kyrgyz politicians, including both acting president Roza Otunbayeva and former president Kurmanbek Bakiyev appealed to the CSTO for assistance.

The then Russian President Dmitry Medvedev refused, saying that the unrest was “an internal dispute” and that “only in the case of a foreign intrusion and an attempt to externally seize power can we state that there is an attack against the CSTO”.

When fighting between Armenia and Azerbaijan in Nagorno-Karabakh broke out in September 2020, it was expected that Armenia would invoke the security protections guaranteed by the CSTO’s charter.

However, Russia’s position was clear from the beginning of hostilities: that because Nagorno-Karabakh was part of Azerbaijan’s internationally-recognised territory, the collective defence statute of the CSTO did not apply.

Moscow did eventually send peacekeepers to back up a ceasefire which it brokered, but under its own banner, not that of the CSTO.

Despite Tokayev’s claims that Kazakhstan is under attack from “foreign-trained bandits and terrorists” there is little evidence of any foreign involvement in the demonstrations that began last weekend in the western Kazakh town of Zhanaozen.

The protests broke out after the government lifted a price cap on LPG, which many Kazakhs use to power their cars as it is cheaper than other fuels.

However, the government said it could not afford to continue subsidising LPG and its decision to remove the cap virtually doubled its price.

Over the following days, the protests became increasingly political, as long-held grievances towards Kazakhstan’s authoritarian government, high levels of inequality, corruption, and cronyism came to the fore. Even after the Kazakh government vowed to reimpose the LPG price cap, protests continued.

Much of the anger was directed towards a former president, Nursultan Nazarbayev, who stepped down in 2019 after nearly 30 years in office but continues to wield significant power. A statue of Nazarbayev was toppled in the town of Taldykorgan.

Early on January 7, Tokayev said that the protests were in effect now over.

“Constitutional order has basically been restored in all regions of the country. Local authorities are in control of the situation.”

“But terrorists continue to use weapons and damage property of citizens. Therefore, counterterrorist actions should be continued until the complete destruction of the militants,” he added.

How big a role CSTO troops played in putting down the protests is unclear: a near total news and internet blackout makes it difficult to gauge the alliance’s impact. It could well have been local forces who restored order.

Also unclear is whether it was local or CSTO forces which were responsible for the killing of protesters. While footage of bodies piled up in morgues has circulated on social media, it is uncorroborated, although even the Kazakh authorities admit “dozens” were “eliminated”.

Toakayev has said that the CSTO contingent “has arrived for a limited period of time to carry out mainly the functions of covering and ensuring the protection of strategic facilities”, and that they had not taken part in any fighting.

For the man who is unquestionably the de facto leader of the CSTO, Russian President Vladimir Putin, the alliance’s role will be of little concern.

But for its de jure chief, Armenian Prime Minister Nikol Pashinyan (Armenia currently holds the CSTO’s rotating presidency), there could be trouble ahead.

Before taking office (ironically as a result of mass street protests against an authoritarian government), Pashinyan – who styled himself as a “street fighter” politician had on several occasions raised the possibility of Armenia’s withdrawal from both the CSTO and the Russian-led Eurasian Economic Union.

According to Aleksandr Iskandaryan, the director of the Caucasus Institute in Yerevan, Pashinyan “had to order the dispatch Armenian troops to Kazakhstan because he needs to demonstrate loyalty to Russia and the CSTO”.

The EU has so far been muted in its response to events in Kazakhstan, limiting itself to vague calls for “dialogue with all stakeholders” and “respect for the fundamental rights of citizens”.

That could change if it emerges that foreign, CSTO troops were responsible for the killing of Kazakh protesters.

Whether we will ever find out of course is another matter.

“Abroad there are calls for the two sides to hold negotiations for a peaceful resolution. What idiocy. We were dealing with armed and well-prepared bandits, both local and foreign. Bandits and terrorists, who should be destroyed.”