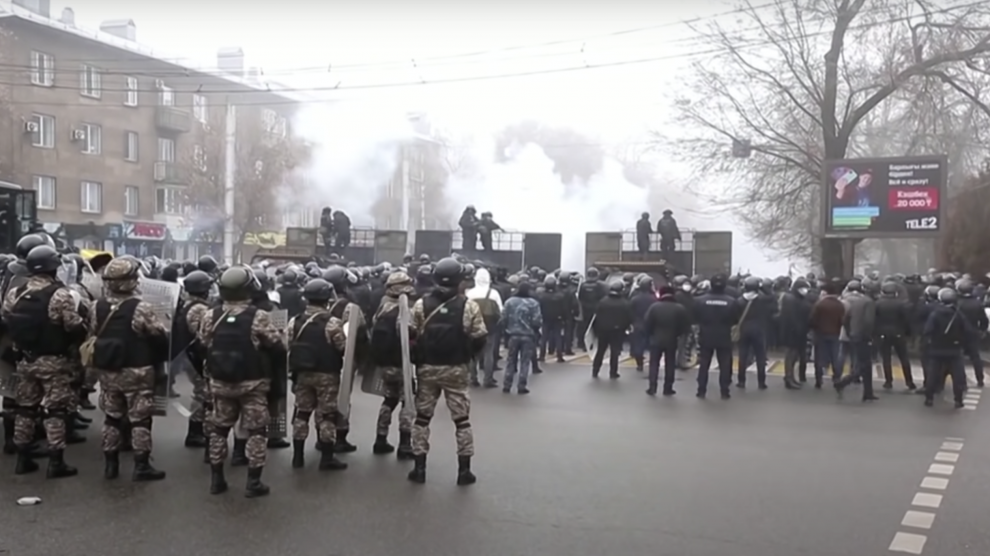 Russian forces – under the guise of the Collective Security Treaty Organisation (CSTO) – have been deployed to Kazakhstan in order to assist the country’s authorities in their efforts to restore order as widespread protests threaten to sweep them from power.

Protests continued for a fourth day on January 6, despite reports of many deaths. Dozens of protesters were reportedly killed overnight by police after they attempted to storm government buildings in Almaty, Kazakhstan’s largest city.

A representative of the Almaty police department, Saltanat Azirbek, was quoted by Russia’s Interfax news agency as saying that dozens of participants in “riots” had been “eliminated” in an “anti-terrorist” operation. Azirbek urged Almaty residents to stay at home.

Eight police officers and national guard personnel were also killed in different regions of the country, according to Kazakh news platform Tengrinews.kz.

The previous day, Kazakhstan’s President Kassym-Jomart Tokayev had at first vowed to address the issues driving the unrest, which began over the weekend in the western town of Zhanaozen and were linked to an increase in the price of liquified petroleum gas (LPG), the fuel that many Kazakhs use to power their cars.

Early on January 5 the Kazakh government resigned, and Tokayev promised that a cap on LPG prices would be restored. Later, however, he declared a state of emergency while also taking control of the powerful National Security Committee, which had previously been chaired by the former president, Nursultan Nazarbayev, who stepped down in 2019 after almost 30 years in office but who is widely believed to still wield considerable influence.

Tokayev then appealed to the CSTO for assistance, saying that Kazakhstan was under attack from foreign-trained “bandits” and “terrorists”.

“Almaty was attacked, destroyed, vandalised. Residents became victims of attacks by terrorists, bandits, and it is therefore our duty to take all possible actions to protect our state,” said Tokayev in a televised statement.

Late on January 5 Armenian Prime Minister Nikol Pashinyan, who was ironically ushered into office by widespread street protests and is currently the chairperson of the CSTO, said the alliance, which includes Armenia, Belarus, Kazakhstan, Kyrgyzstan, Russia, and Tajikistan, would dispatch forces to “stabilise” Kazakhstan.

“The task of the CSTO forces will be the protection of state and military facilities,” he added. The first CSTO troops, including a Russian airborne division, arrived in Almaty on January 6.

The National Bank of Kazakhstan has suspended the operations of all financial institutions, including commercial banks and the country’s stock exchange. The internet has been severely disrupted in parts of the country, with no service at all in Almaty for long periods, while the city’s airport has suspended all commercial flights.

According to Human Rights Watch (HRW), authorities in Kazakhstan have long restricted fundamental rights, including the right to peaceful protest, freedom of association, and free speech, and have rejected calls to introduce meaningful political and human rights reforms. Kazakhstan has banned opposition parties and prosecuted opposition activists.

A presidential election in 2019, won by Tokayev with 71 per cent of the vote, was slammed by international observers from the Organisation for Security and Co-operation in Europe (OSCE) as showing “scant respect for democratic standards”.

“During this crisis, it is vital that Kazakhstan respects the right to peaceful assembly and free speech, and upholds its international human rights obligations,” said HRW’s Europe and Central Asia director Hugh Williamson.

“When policing crowds, force should be used as a last resort, and if force is justified, it must be proportionate to the threat and deployed in a way that minimises damage, injury, and indiscriminate impact.”

Longstanding concerns over economic hardship and inequality in Kazakhstan were reinforced during the Covid-19 pandemic, with people of low incomes and in the informal economy, in particular women with multiple children, being especially vulnerable.

Half of the country’s population lives in rural and economically isolated areas with poor access to public services.

According to the World Bank, over the past decade, Kazakhstan has made strong policy strides and responsibly absorbed large natural resource–based earnings by implementing a rules-driven fiscal framework.

However, diversification remains a challenge for a country with the ninth-largest oil reserves in the world, as hydrocarbon output constituted 21 per cent of GDP and about 70 per cent of exports in 2020.