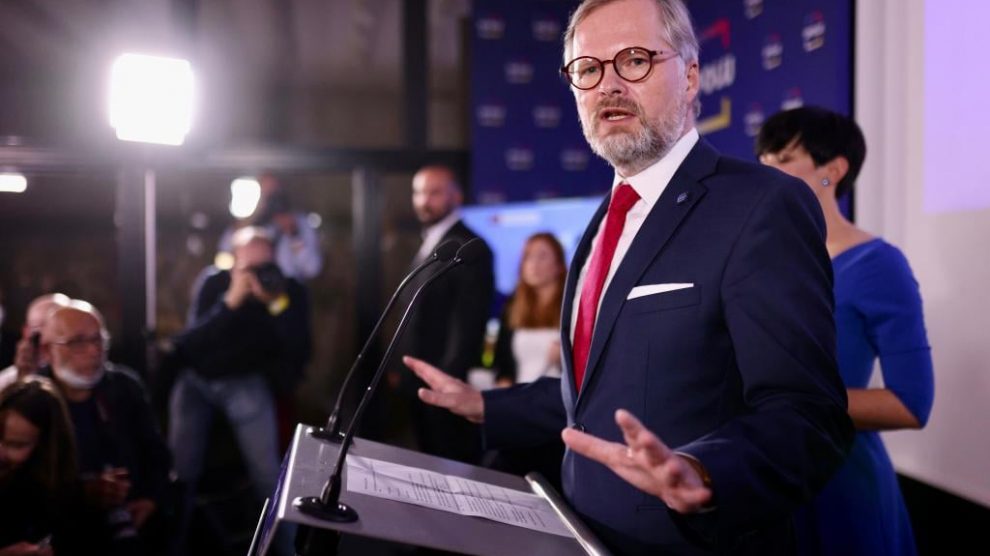 Czechia in theory has a new ruling coalition, but the ongoing hospitalisation of President Miloš Zeman, unable to carry out his duties since October 10, means that the new executive cannot take office just yet.

Five centrist and centre-right parties in Czechia reached an agreement to form a majority coalition government on November 2, according to Petr Fiala (pictured above), the chairman of the largest party in the new coalition, the Civic Democrats.

Fiala – the most likely new prime minister – added that the parties had agreed to a governing programme and the distribution of cabinet posts, although he did not name the individual candidates.

“We agreed on all the essential things that will allow the formation of a future government,” said Fiala, who added that he expected the coalition deal to be formally signed on November 8.

The new coalition includes, alongside Fiala’s Civic Democrats, the Christian Democrats and the liberal TOP 09 party — who ran together in an inconclusive election in October as Spolu (Together) – as well as the Pirate party and STAN, an independent group of mayors and non-aligned officials.

The five parties won 108 seats in the 200-seat lower house of parliament in the election, in which the ANO party of erstwhile prime minister Andrej Babiš, despite taking the most seats, saw its own coalition partners, the Social Democrats and Communists, routed.

Neither made the five per cent threshold to enter parliament, leaving Babiš, who had been embarrassed just days before the election by Pandora Papers revelations that he had put 22 million US dollars into shell companies to buy 16 properties in southern France, including a chateau, isolated.

Babiš, as leader of the largest party in parliament, had nevertheless hoped to be named as prime minister by President Miloš Zeman, an ally, but the president has been incapacitated since October 10, with little information being provided on his condition beyond the fact that he is “stable”.

Zeman had previously stated that he would only give the prime ministerial mandate to the leader of a single party and not to a coalition of different political groupings.

Babiš has claimed that before his hospitalisation, the president had invited him to talk about his chances of continuing in office.

Fiala said on November 2 that he had been informed by the president’s chief of staff that Zeman is ready to meet him once he is transferred out of intensive care, but he did not give any further details. The head of state must formally propose a prime minister before a confidence vote can be contested in parliament and the new executive invested.

In the event that Zeman has to resign as president due to poor health, or even pass away, the duties of the head of state position would be taken up either by the president of the lower house or of the senate, the upper house.

The current senate president, Miloš Vystrčil, is a member of Fiala’s party, and the next president of the lower house – likely to be elected when it reconvenes on November 8, will also, almost certainly, be a member of the centre-right alliance.

One of the first tasks for the new coalition will be stabilising the state of Czechia’s public finances, badly hit by the Covid-19 pandemic and measures to contain it.

In the third quarter of 2021, Czech GDP grew by just 2.8 per cent year-on-year, below most forecasts and expectations.

According to Jiri Polansky, an analyst at Erste Group, which owns Česká spořitelna, the country’s largest commercial bank, the Czech economy is now experiencing a slowdown, which will intensify in the fourth quarter.

This is mainly due to problems in the automotive industry, where there has been a strong reduction in production, as well as rising energy prices, which have been forcing several firms to reduce output.