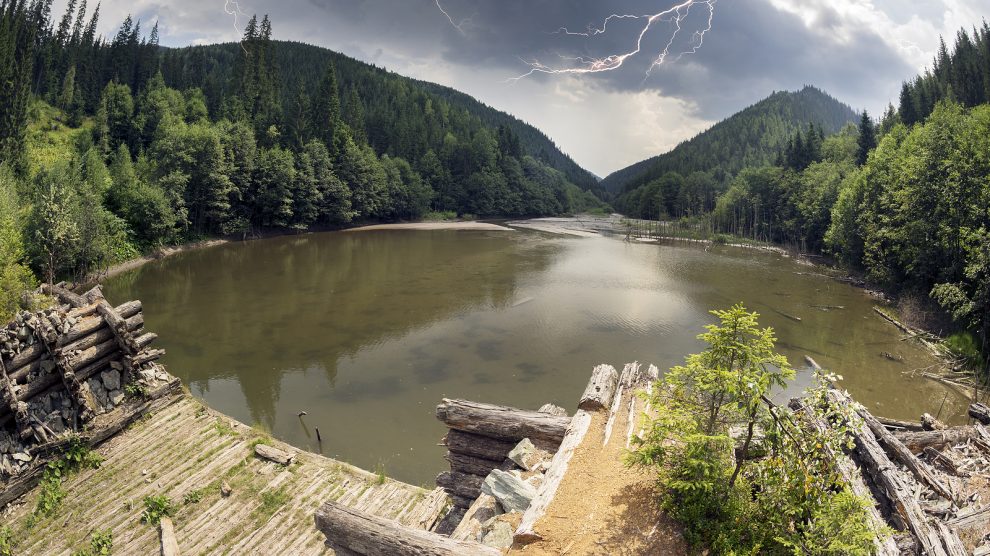 The environmental cost of Russia’s brutal war on Ukraine is likely to be colossal, but amongst the devastation there is some good news from the Carpathian Mountains.

Despite the ongoing war prompted by Russia’s invasion of Ukraine on February 24, critical conservation work continues in the country with a World Wildlife Fund (WWF) team this summer successfully removing an obsolete dam in the Carpathian mountains, opening a river to migratory fish for the first time in 120 years.

The dismantling of the clogged and abandoned Bayurivka dam has freed 27 kilometres of the Perkalaba River close to Ukraine’s western border with Romania – and removed the risk of the barrier failing.

Reconnecting the river will allow fish such as endangered Danube salmon, brown trout and Ukrainian brook lamprey to return to their ancient spawning grounds, boosting their populations and supporting the return of predators such as brown bears, European mink and otters to what could soon become a biodiversity hotspot in the Carpathians.

“This dam removal is a very small step when compared to the huge environmental damage caused by the war but we are still proud that we were able to fulfil our plan and restore this river,” says Dr Bohdan Vykhor, CEO of WWF Ukraine.

“By removing obsolete dams across the Carpathian mountains, we are helping to create healthier, more resilient ecosystems that will benefit people and nature long into the future.”

Bayurivka was the first dam to be demolished thanks to funding from the European Open Rivers Programme, a game-changing 42.5 million euros initiative to drastically speed up the removal of obsolete dams and weirs across Europe to restore rivers, boost biodiversity and strengthen climate resilience.

“It is extraordinary that the Bayurivka dam is the first barrier to be removed by the programme,” says Jack Foxall, executive director of the European Open Rivers Programme. “We are inspired by the determination of the WWF Ukraine team who continued with their river restoration activities during these unprecedented times.”

WWF has now removed seven obsolete dams in Ukraine since 2020, opening up 530 kilometres of river – more than one sixth of the overall goal to restore 3,000 kilometres of free flowing rivers in the country by 2030.

This latest removal in Ukraine shows the growing momentum behind dam removals throughout Europe.

Last year saw a record 239 barriers removed in 17 countries across the continent, including three countries that dismantled their first dams – Montenegro, Portugal and Slovakia.

“Europe’s rivers are littered with 150,000 obsolete dams, weirs and other barriers, which serve no purpose. All they do is disrupt the natural flow of rivers, blocking fish migrations and contributing to the ongoing collapse in freshwater biodiversity,” says Eva Hernandez, WWF lead at the Living European Rivers Initiative, which works on dam removals across the continent.

The pace has continued this year with the removal of a second huge dam – the 16 metre Roche qui Boit dam on the Selune River in France – while the UK has just witnessed the biggest weir removal so far on the River Kent in the Lake District.

WWF has since the beginning of the war been warning about the environmental damage caused by the conflict.

The territory of Ukraine contains habitats that are home to 35 per cent of Europe’s biodiversity, including 70,000 plant and animal species, many of them rare, relict, and endemic. They include European bison and brown bears, lynx, and wolves as well as sturgeon, the world’s most threatened group of species.

Military intervention threatens these natural treasures. Movements of large-scale military vehicles and explosives are damaging habitats both inside and outside protected areas.

Fires sparked by attacks have already damaged over 100,000 hectares of natural ecosystems, according to satellite data from the European Forest Fire Information System. The State Forest Resources Agency of Ukraine has already recorded 78 times more fire incidents than during the same period last year.

According to the Ukrainian Ministry of Environment and Natural Resources, at least 900 protected areas together covering 1.2 million hectares or 30 per cent of all protected areas in Ukraine have been affected by shelling, bombing, oil pollution, and military manoeuvres.