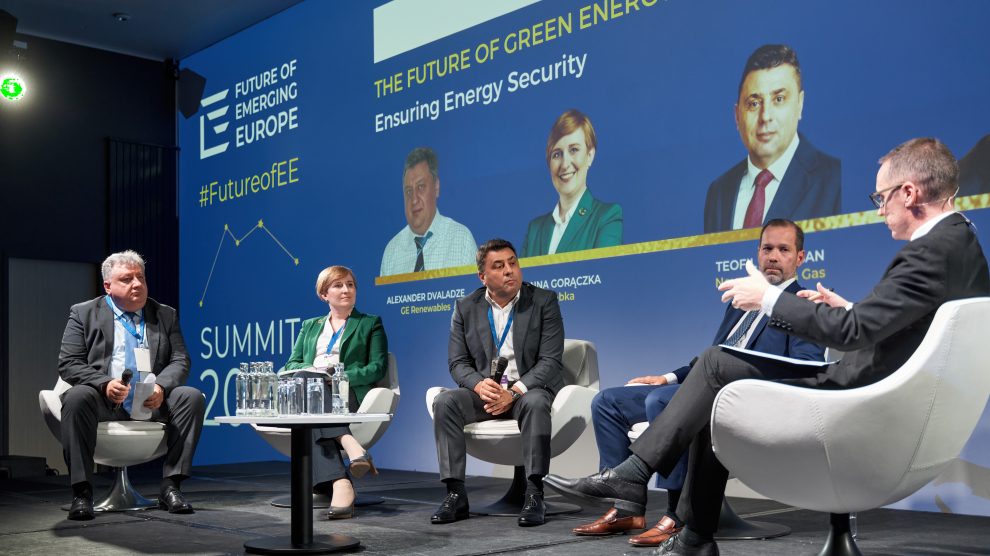 Ending Europe’s reliance on Russian fossil fuels and transitioning to clean energy have long been distant, often vague goals. Both are now necessities, but there is no quick fix.

Addressing climate change and accelerating the green transition are more closely than ever linked to energy security. It is a political priority for Europe, especially for some of the 23 countries of emerging Europe, which are landlocked and overly reliant on a certain to the east for fossil fuel supplies.

While investment and research into all sorts of alternatives is growing, this is not currently taking place at a pace that can ensure, in the short-term, a swift transition from volatile supply streams and high energy prices to more affordable, secure and clean energy.

In May, the European Commission revealed its plan for how Europe can end its reliance on Russian fossil fuels by 2027 and use the pivot away from Moscow to quicken its shift to green energy.

The plan, dubbed REPowerEU, was its response to the hardships and global energy market disruption caused by Russia’s invasion of Ukraine, and includes a switch to import more non-Russian gas, a faster rollout of renewable energy, and more effort to save energy.

“Today, we are taking our ambition to yet another level to make sure that we become independent from Russian fossil fuels as quickly as possible,” said European Commission President Ursula von der Leyen when announcing the plan. Since then, the EU has called on member states to cut natural gas use by 15 per cent under another plan intended to prepare the bloc for a possible halt in Russian supplies.

Why did it take so long?

For many in Europe – and beyond – questions are being asked however as to why it has taken Russia’s invasion of Ukraine to spur the EU into action. Should there not have already been a plan in place to end Europe’s over reliance on one strategic energy partner?

There is also a feeling among some analysts that the war caught more than a few countries napping, hence the scramble to find new sources of fossil fuels as well as speed up the switch to renewables.

“There is no doubt that war in Ukraine has changed everything,” says Drew Bond, president of C3 Solutions, a conservative coalition for climate solutions that believes a healthy environment is crucial for a growing economy. “It looks like energy security is back in the front seat.”

Bond was speaking at Emerging Europe’s Summit and Awards in Brussels in June, where conversation quickly turned to the kind of energy solutions that Europe should be looking to deploy in order to reduce reliance on fossil fuels.

Keeping the lights on

For Alexander Dvaladze, general manager of GE Hydro Solutions Central and Eastern Europe, the answer is hydropower, already common in much of the Western Balkans.

“Hydro is the forgotten giant,” he says. “Hydro is one of the best sources of energy, and for the EU and emerging Europe it is necessary to understand that without hydro it will be impossible to achieve their net zero targets. It must be put on the top of the agenda.”

“Hydro power is clean, sustainable and not intermittent. Why not take advantage of such tremendous knowledge of using this power to generate and store energy?”

Other renewable solutions include wind power, particularly that which is generated offshore. The Black Sea, often cited as a potential source of gas (Romania recently passed laws that will unblock gas extraction from its Black Sea shelf), has great potential to supply much of emerging Europe with clean, wind-generated energy, according to Teofil Mureşan, chairman of E-Infra and Nova Oil and Gas.

His firm is developing infrastructure that will bring Black Sea wind power to central Europe through supply lines that will run alongside an existing gas pipeline that traverses Romania.

For Mureşan, cooperation will be key, between countries and between the public and private sectors.

“Eastern Europe, the Balkans, can take advantage of the energy the Black Sea can provide by working together, ensuring interconnection between countries,” he says.

He adds that keeping the lights on also needs governments to realise that there will be a role for fossil fuels for the foreseeable future.

“There is huge potential in offshore windfarms, but we need to balance the unpredictability of renewable resources,“ he says, adding, “we need to remember that the transition is just that, a transition. Otherwise, we could be put in a dangerous situation: where the price is very high or when there will be a technical danger of not being able to keep the entire European system functioning safely.”

One of the largest and greenest chains of convenience stores in Central and Eastern Europe, with 7,600 manned and unmanned facilities, Polish retailer Żabka has developed its business model by focusing on the growth of the convenience format and on technological advances, while simultaneously integrating those activities with the values of Żabka brand.

Its chief green officer, Anna Gorączka, says that we should learn how to use energy better. “In today’s world, value is not equal to money,” she says. “Creating value also means minimalising our impact on the environment. Decarbonisation is a solution for that and renewable energy is one of the important pillars of decarbonisation.”

But she also points out that renewables are only part of the solution. “Renewable energy is important but so is energy effectiveness,” she adds.

All the best minds must be at the table

Żabka’s responsibility strategy consists of four pillars: a sustainable lifestyle; mindful business impact; responsible organisation; and green planet, meaning responsibility towards the environment. Each year the firm, which wants to become climate neutral in just a few years’ time, publishes a report that measures its environmental impact and sustainability.

This kind of private-sector led drive for change is crucial, Gorączka believes.

“To help solve the climate challenge you need all best minds at the table,” he says. “Creating durable solutions is not something that comes from one side or the other. You must have a robust debate and policies from all sides approaching this from a solution standpoint.”

If there is conclusion to be drawn from the discussions in Brussels it is that individual countries, or even groups of countries, be it the European Union, the United Nations, or any other supra-national organisation, will not solve the twin challenges of climate change and energy security without the involvement of the private sector and the innovation it brings about.

Whether its infrastructure delivery from giants such as GE Hydro and E-Infra/Nova Oil and Gas, or big retailers such as Żabka playing an active role in reducing energy consumption and nudging consumers to make better-informed choices, the private sector in emerging Europe is showing the kind of leadership that governments need to follow.

Drew Bond, Anna Gorączka, Teofil Mureşan, and Alexander Dvaladze were speaking with Emerging Europe’s Craig Turp at the Future of Emerging Europe Summit & Awards in Brussels in June. You can watch the full discussion below.