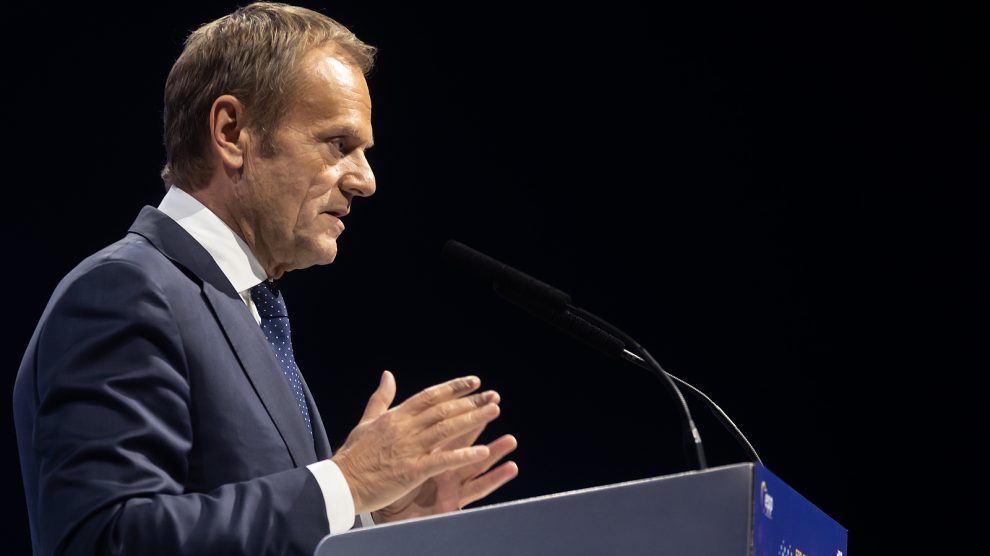 Former PM Donald Tusk has returned to frontline Polish politics on a mission to revive the fortunes of the country’s opposition.

Donald Tusk, a former prime minister and more recently the president of the European Council, formally returned to Polish politics on June 3 vowing to take on the country’s ruling Law and Justice party (PiS), which he labelled as “shamelessly evil”.

Speaking after being elected as the leader of the country’s largest opposition group, Civic Platform (PO), Tusk said that he was “ready to fight this evil” and that his return had been necessary in order to make PO once again a “force that can win the battle with Law and Justice over Poland’s future”.

Tusk, who was Poland’s prime minister from 2007-14 and a founder of PO, accused PiS of pursuing an agenda that suited Russian President Vladimir Putin, designed to “divide” Europe.

“Their contempt for minorities, their brutal, vulgar authoritarian tendencies, their aversion to all types of freedom, their permanent attacks on the EU. That’s Putin’s agenda, every bit of it,” said Tusk.

Tusk’s first task will be to create a viable alternative to PiS ahead of a parliamentary election in 2023.

PiS remains the most popular party in Poland but last week lost its slim majority in parliament after three of its MPs left to form their own political group amid criticism over a decision to phase out coal, as well as the country’s pandemic recovery plan.

While the move is not expected to bring down Prime Minister Mateusz Morawiecki’s government – it can count on support from some smaller parties in crucial votes – its grip on power looks shakier than at any time since it took office following an election in 2015.

Both PiS and PO have lost support to the centrist Poland 2050, which despite having just five seats in parliament is now the second largest party in the country according to most recent opinion polls.

PO has slipped to third, with one recent poll crediting it with just 16 per cent of the vote.

The job ahead of Tusk, now 64, is therefore tough, not least as he will need to breach a generational divide in PO.

Mayor of Warsaw Rafał Trzaskowski, 49, PO’s candidate in last year’s presidential election, which he lost to the incumbent Andrzej Duda, backed by PiS, had been positioning himself as the new leader of Poland’s opposition.

Tusk, however, clearly believes that he still has what it takes to revive PO’s fortunes.

Others, however, believe that Tusk will only be able to take PO so far.

“I think that Tusk will be able to bring Civic Platform back to 20-plus per cent in the polls, and I think that will happen quickly, which will give him something to build on,” Wojciech Szacki, a political expert at Polityka Insight, a Warsaw-based think-tank, told the Financial Times.

“But I don’t think it will be enough to overtake Law and Justice in the polls. I think there is a ceiling above Tusk’s head. Poland has changed since he left. Lots of people either dislike what Civic Platform did when it was in power, and others don’t remember it.”

Radosław Sikorski, an MEP who served as foreign minister in Tusk’s government, is confident however that the former PM can rejuvenate PO.

“Tusk’s experience and authority give him a chance,” he wrote on Facebook. “This is not a return to the past, and Tusk’s age is irrelevant. He is eight years younger than [PiS leader Jarosław] Kaczyński and 15 years younger than Joe Biden.

“An intelligent politician understands that people’s expectations and the challenges facing the country change over time. Biden is a good example of this – for years regarded as painfully centrist, as president he comes out with an ambitious programme of serious reforms. Why? Because the world does not stand still.”

Kaczyński himself was also this weekend relected as leader of his party, but vowed that it would be his “last” term.

Since then, however, he has formally taken a back seat, while continuing to pull the strings from behind the scenes.