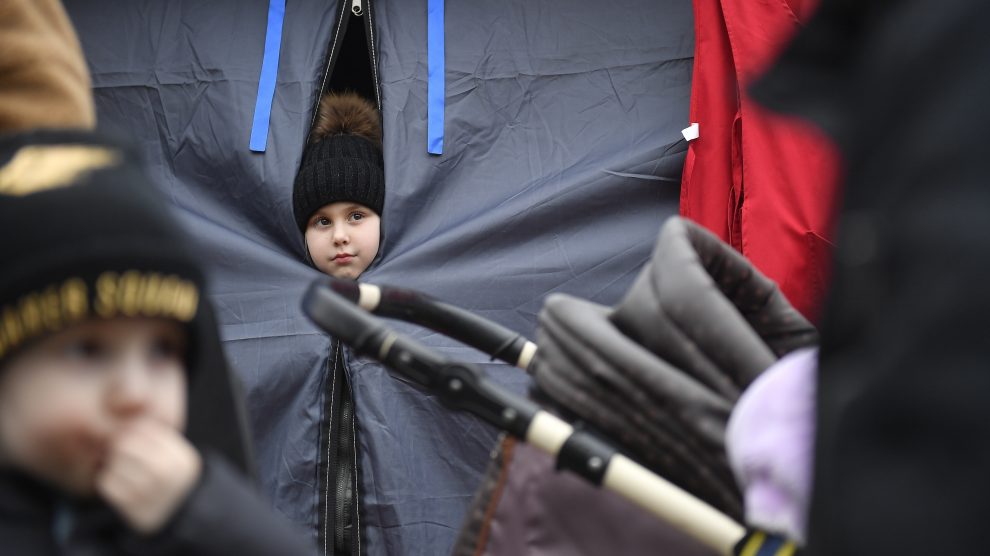 Almost 400,000 Ukrainians have fled their homes since Russia began its invasion of the country on February 24, according to the United Nations High Commissioner for Refugees (UNHCR).

Those fleeing are mostly women and children, as all Ukrainian men aged 18 to 60 are being told to stay and fight – in some cases separated from their families.

The largest numbers – around 115,000 – have headed for Poland, with others entering Hungary, Moldova, Romania, and Slovakia, all of which have borders with Ukraine.

“The governments and people of those countries are welcoming refugees. It is now urgent to share this responsibility in concrete ways,” said Filippo Grande, the UN’s commissioner for refugees.

The European Union on February 27 announced that it will take in Ukrainian refugees without asking them to apply for asylum first, and that they will be allowed to stay for three years, although speaking with some refugees at Sighet, a border crossing point between Ukraine and Romania, it was clear that most intend on returning home as soon as possible.

“I love Romania and have visited several times but I hope this visit, like all the others, is temporary,” said Galyna Kitayeva, from Kolomyya in western Ukraine shortly after crossing the border with her elderly mother and two children.

“My husband is a reservist soldier and has joined the local defence brigade. He has promised that he will defend our home and protect it until it is safe for us to return. One of the children has a birthday in April: we hope to be home for that,” she told Emerging Europe.

According to Dan Cărbunaru, the spokesperson for Romania’s government, as of February 28 just 373 of the approximately 35,000 refugees who have so far arrived in the country had formally asked asylum, a further suggestion that most plan on returning as soon as possible.

In a poll conducted over the weekend by the Rating Sociological Group, more than 70 per cent of Ukrainians said that they believed Russia’s invasion would fail.

Kitayeva and her family were offered accommodation by locals, many of whom have come to the border to do all that they can for the Ukrainian refugees, handing out food, drink, and clothing as well as offering a place to stay. The Romanian government has also set up camps with tents, beds and electricity for refugees at Sighet, and at Siret, another crossing point from western Ukraine, as well as at Isaccea in the south, close to Odesa.

Romanian NGOs have also been active in offering support to refugees from Ukraine.

Code4Romania, set up two years ago in response to the Covid-19 crisis and which offers digital solutions for people in need, has in just a few days created a database, dopohoma.ro, available in Ukrainian, Russian, Romanian and English, listing services available to refugees as well as as offering practical advice and digital tools.

“Anyone who seeking protection in Romania from the war in Ukraine now has a credible source of up-to-date information,” Bogdan Ivanel, co-founder and CEO of Code4Romania wrote on Facebook.

In Poland, the bulk of refugees have been arriving at Medyk, a few kilometres east of the town of Przemyśl, where the authorities have organised a temporary reception centre. There are also a number of citizen and local government-led initiatives providing humanitarian assistance.

The country is set to adopt a special law that will temporary legalise their stay in Poland, and the government has said that refugees will be entitled to medical assistance and that children will be able to attend Polish schools.

“Attitudes are very positive, both the government and citizens are trying to provide as much assistance as possible. The situation could be perceived as chaotic, but I hope it will change soon,” Jacek Białas a lawyer at the Helsinki Foundation for Human Rights told Emerging Europe.

Shops in provinces near Poland’s border with Ukraine were allowed to open on February 27, despite a Sunday trading ban which has been in place in Poland since 2018.

“Providing necessities to refugees is clearly in the ‘greater good’ and the law will shortly be clarified,” a government spokesperson said. Train travel across Poland has also been made free for Ukrainians.

In Moldova, Europe’s poorest country, the number of refugees has now topped 70,000 and the small state is struggling to cope.

After a visit to a border crossing point on February 27, Moldova’s President Maia Sandu requested additional aid from the EU.

“We are counting on the EU’s swift assistance,” she said, confirming that she had spoken to Olivér Várhelyi, the EU Commissioner for Neighbourhood and Enlargement. “We will continue to do all we can to assist people from Ukraine.”

The numbers of refugees is expected to grow in the days and weeks ahead as fighting in Ukraine continues. The European Union has said that as many as four million people could be displaced as a consequence of Russia’s invasion if its offensive does not end soon.

“I am proud of how European citizens at the borders are showing concrete solidarity with Ukrainians fleeing this terrible, aggressive war,” said EU Home Affairs Commissioner Ylva Johansson.