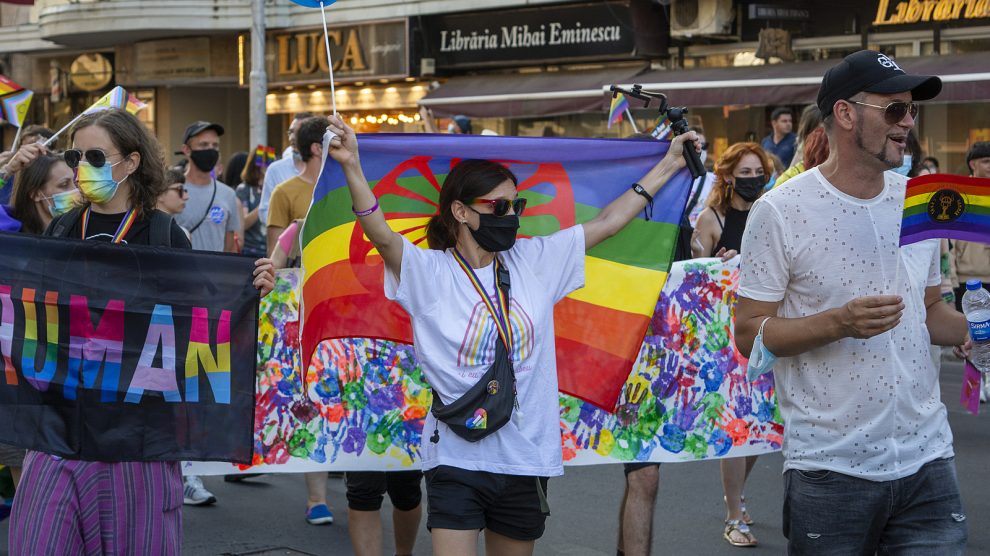 In a resolution on the rights of LGBT+ persons in the EU, the European Parliament has condemned the continued failure of some governments – in particular Romania – to respect the residency and benefit rights of same-sex partners as they move between member states.

According to the resolution, citizens should be able to fully exercise their rights, including the right to free movement, everywhere in the European Union.

The resolution states that marriages or registered partnerships formed in one member state should be recognised in all of them in a uniform way, and same-sex spouses and partners should be treated the same as their opposite-sex counterparts.

The resolution was supported by 387 MEPs, with 161 voting in opposition and 123 abstaining.

While EU member states retain the right not to legalise same-sex marriage or civil partnerships, since 2018 they have been obliged to at the very least recognise the residency rights of same-sex spouses who have been married elsewhere in the bloc.

In June of that year, the Court of Justice of the European Union (CJEU) issued a landmark judgement in a case involving a Romanian man and his American husband, that EU countries must recognise the immigration rights of same-sex spouses under EU freedom of movement laws, regardless of whether same-sex marriage is legal in the respective EU country.

Three years later, however, Romania has still not respected the judgement by granting the male spouse of the Romanian man a residence permit, according to a study commissioned by the European Parliament.

The study now wants the European Commission to launch an infringement procedure and take enforcement action against Romania, because of the country’s ongoing failure to comply with the CJEU’s 2018 ruling.

It also wants the Commission to examine whether the other 26 member states comply with the ruling and take enforcement action against any that do not.

Ramona Strugariu, a Romanian MEP who voted in favour of the resolution, rejected accusations from Romanian conservatives that she had voted against her own country.

“A CJEU decision is law,” she wrote on Facebook. “It is obligatory, and needs to be applied in all member states; not respecting it means infringement procedures. We are no more special than anybody else, we have the same obligations, the same rules, and free movement is an integral part of those obligations.

“If a Romanian citizen’s right to free movement was being impeded in another member state, would we be up in arms? Of course we would.”

ILGA-Europe, which campaigns for LGBT+ rights across Europe, said in statement that the recommendation to begin infringement proceedings was a clear sign that member states can no longer act with impunity.

“The European Commission today show that the EU has come to a tipping point; after years of governments testing how far they can go, it has taken a clear step towards holding them accountable.”

The resolution passed by the European Parliament also urges all EU countries to accept that adults named on a child’s birth certificate are their legal parents.

MEPs want rainbow families to have the same rights to family reunification as opposite-sex couples and their families.

For a rainbow family, consisting of a same-sex couple and any children they might be raising together (as a result of a prior opposite-sex relationship, adoption, or assisted reproduction, including donor insemination and surrogacy), free movement can be much less free, and much more complicated.

Crossing a border between EU member states can mean that the legal ties within the rainbow family dissolve.

On the other side of the border, they become two unrelated individuals, deprived of the rights and duties enjoyed by comparable opposite-sex couples in the host or home member state.

Meanwhile, in some countries, any children rainbow families are raising together have two legal parents, either because both are listed in the children’s birth certificates, or because the same-sex couple was able to jointly adopt them or to apply for a second-parent adoption.

In others, however, each of their children loses one legal parent (usually the non-genetic parent) or, sometimes, both of her or his legal parents.

What can Bulgaria’s caretaker government learn from the Dutch?
Ukraine is failing to tackle its scam call centres
Comment