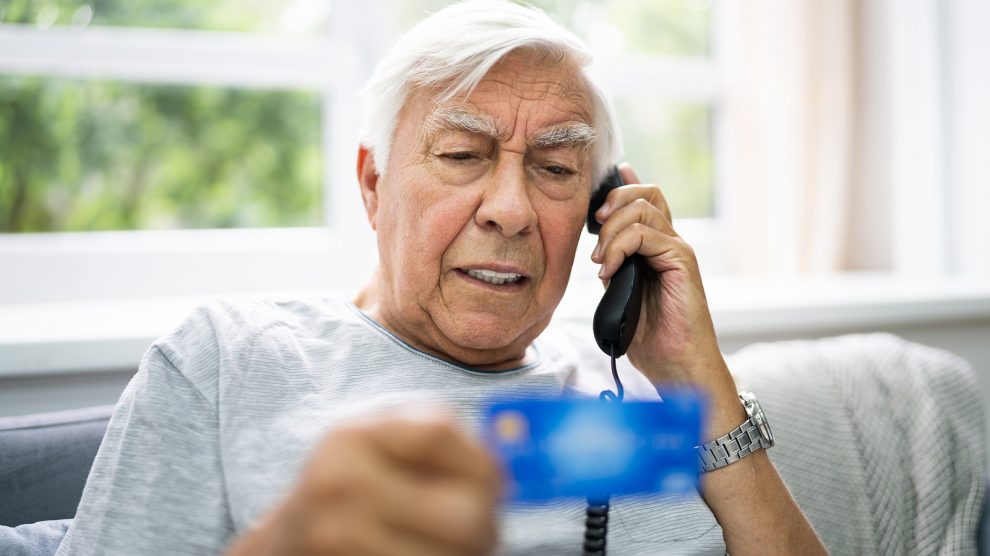 More than 18 months after a massive expose in the international media, Ukraine’s dubious call centres – including one located in the heart of Kyiv – continue to operate with impunity.

Many people would say that central Kyiv is the worst part of Ukraine’s capital city.

Downtown, across the street from the historical Bessarabian Market, lies the Mandarin Plaza commercial centre, which encapsulates why many feel this way.

At one end, it is filled with high-end luxury fashion boutiques, catering to Ukraine’s upper crust. At the other end is Arena City, a courtyard full of bars, a few chain restaurants, at least two strip clubs, a brothel, and – somewhat surprisingly – offices.

At various times of day, the courtyard becomes full of workers from these offices – primarily young people from all over the world, from places as far away as Ecuador and Pakistan.

They work for what is probably the biggest scam call centre in Ukraine.

All of this was revealed in March of last year when a massive operation by 20 media outlets including the Times of Israel, Swedish daily Dagens Nyheter and the NGO OCCRP exposed the rampant fraud occurring almost openly in the heart of a European capital.

The company involved was identified as Milton Group. A whistleblower working for them approached the Swedish media after being horrified by the kind of work they did – Dagens Nyheter equipped him with a hidden camera to record what goes on.

Others are also now willing to share their experience working for the company.

Yuri, who asked for his surname to remain confidential, underwent “training” shortly before the expose last March. He describes how from the beginning, something felt off.

“I did the interview, which lasted about two minutes. And I saw that the office looked kind of strange, like they were actively trying to look like a respectable office instead of just being so. It looked like the idea of an office made by someone who had never worked in a real one.”

Yuri then describes how he underwent “training” for a week. The “instructor” handed out booklets and explained that the work would involve calling “clients” and offering them an opportunity to invest in cryptocurrencies and similar products. Yuri’s suspicions began really being piqued when the instructor explained how their service – known as TitanPro500 – was not subject to accreditation from financial regulators because it is “decentralised”, and to explain this to “clients”.

“They then gave us tactics for how to stop people from doubting us. They said to just keep talking, don’t give the client enough time to think.”

Furthermore, trainees were told to give fake, western-sounding names to their clients and to say that they were based in central London. “Everything about them is dishonest. They tell you to lie every step of the way,” Yuri tells Emerging Europe.

Yuri left after completing a one week training course and pocketing the promised 500 hryvnia. By that point, he said he was “completely convinced that they were doing something illegal, and that I made the right decision not to work for them. There are many types of jobs I am willing to do, but I just can’t cheat people. This is wrong.”

However, not everyone has the same principles as Yuri. Tens if not hundreds of people continue to work at the call centre. A quick search on Ukrainian job sites work.ua and rabota.ua will yield many results for positions such as “sales manager” and “retention manager”, offering very generous salaries – the “companies” attached to these job advertisements usually have some kind of generic name.

If they have a website at all, it is full of stock images and buzzword-heavy meaningless phrases, giving no information at all about what the company actually does.

And although they have different generic names and websites, they all lead back to Mandarin Plaza and Arena City.

The expose of last March identified the director of the company as Jacob Keselman. It is unclear what citizenship he holds, however his social media profiles show that Russian is his native language, that he studied in Kyiv and worked in Israel for a few years. On his now deactivated Instagram account, he branded himself as “the wolf of Kiev”, a direct reference to the Scorsese film and regularly posted pictures of himself driving luxury cars in high-end holiday destinations like Dubai and Monaco.

When contacted by media investigators, Keselman claimed that some “clients” lose money because “they don’t understand how [investment] is working.”

However, reading the heartbreaking interviews with the victims of the scammers shows that this was certainly not the case. Dagens Nyheter spoke to several Swedish victims – primarily old people living in provincial towns and rural areas – and the stories are strikingly similar.

Many involve one “trader” named “William Bradley” – later revealed to be an Iranian student living in Kyiv. A secret video taken by the Milton Group whistleblower shows “William Bradley” wishing one of his victims a happy new year, before hanging up and boasting about how the elderly Swedish man gave him about 150,000 US dollars.

Furthermore, company emails leaked by the whistleblower show the utter disdain the scammers hold for their victims. One note about a client casually mentions how he lost 400,000 (it is unclear which currency) and is now staying at a friend’s house, destitute.

Now, over 18 months since all of this was exposed, Milton Group – or whatever its official name may now be – appears to be running as normal. While the Swedish government asked the Ukrainian authorities to take action, it appears nothing substantial has been done.

Milton Group is just one of many scam call centres in Ukraine. Every month or so, the police post photos, in which they are armed to the teeth with equipment more appropriate for counter-terrorism operations, shutting down call centres, usually outside Kyiv.

However, many believe these are token gestures.

According to an employee of the Dnipro-based NGO Anti-Corruption Human Rights Council, who wished to remain anonymous, these call centres began popping up in big numbers around 2014.

“They are attracted by the lower costs. Sim cards, laptops, real estate, workers – all of these are cheaper here.”

When asked why these are so widespread in Ukraine, why authorities are slow to act why the Arena City operation is still openly running more than 18 months after being exposed by the international media, he said that it is difficult for the police to prove culpability in such cases.

“They can’t just go in and investigate, without a warrant from a court. If they tried simply entering and asking questions, they will be told to leave, as our constitution protects private property and businesses from such state interference. Even if they have a warrant, such operations are easy to disguise and hard to trace – they undoubtedly use VPNs, for example.”

However, the expose of last March may also reveal other reasons for the lack of action. The whistleblower attended a lavish New Year party thrown the company’s owners, celebrating 65 million US dollars in sales. Footage from the party shows Jacob Keselman introducing another man, David Todua, a Georgian-Israeli citizen, as the “father” of Milton Group.

According to the whistleblower, Todua is a regular visitor at the call centre, always travelling with multiple bodyguards. OCCRP discovered that Todua has extensive connections with figures in the United National Movement of Georgia, founded by former president Mikheil Saakashvili.

Todua’s business partner in two Ukrainian-registered companies is Davit Kezerashvili, a former minister of defence in a Saakashvili government and, ironically, a former head of Georgia’s financial police force. One of these, Project Partners, is based in a neighbouring building to Mandarin Plaza, and is headed by Gia Getsadze, former deputy minister of justice of both Georgia and Ukraine.

Project Partners also co-owns a construction company, Elitekomfortbud, which is headed by a former Georgian minister of agriculture under Saaksashvili, Petre Tsiskarishvili.

Although OCCRP found no evidence linking any of these former ministers directly to the call centre, at the very least it establishes that David Todua, the “father” of Milton Group, is well-connected to powerful figures.

The scammers have now reached people in over 50 countries, including poorer places such as Lesotho, Ecuador and the Dominican Republic, but it is unclear how exactly the Ukrainian authorities can tackle the problem.

Nevertheless, it reflects badly on Ukraine’s international image and European aspirations that more than 18 months after the scam was exposed by some of the world’s most prestigious media outlets, the Ukrainian government has not taken any action.