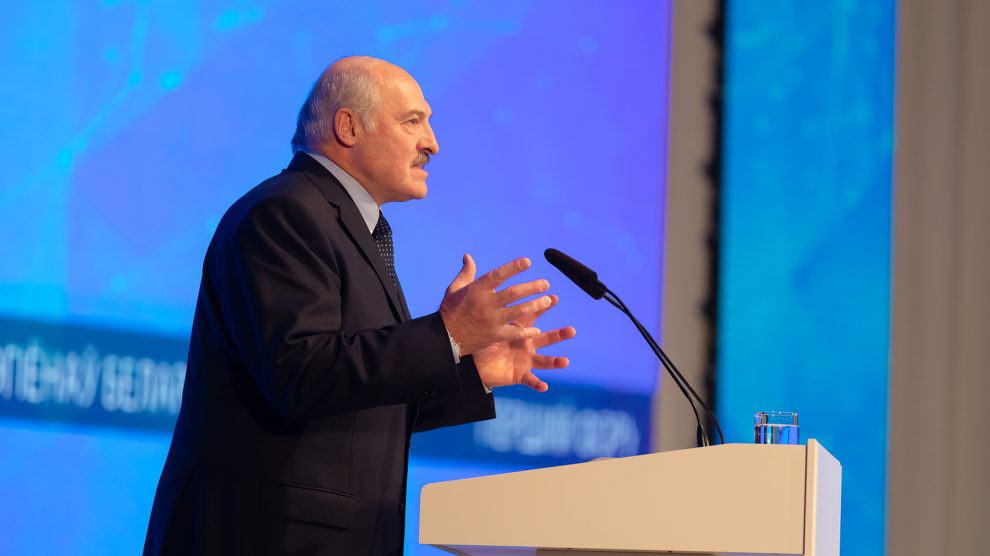 As speculation grows that Belarus might formally commit troops to Russia’s invasion of Ukraine, the country’s economic woes pile up.

Earlier this month the dictator of Belarus, Alexander Lukashenko, who rarely makes the news for the right reasons, came up with a characteristically idiosyncratic way of attempting to control runaway inflation: he “banned” consumer price rises.

“From today, any price increase is prohibited,” Lukashenko said on October 6, citing what he called “outrageous” price increases.

Svetlana Tikhanovskaya, the exiled leader of the Belarusian opposition, compared the move to “banning rain” and warned the measures could compound economic woes.

“These desperate attempts for control demonstrate a lack of control and inability to manage the situation,” she said, adding that, “the only source of the political, economic and humanitarian crisis in Belarus is the regime itself.”

According to the World Bank, which last week published its latest economic outlook for Eastern Europe and Central Asia, inflation in Belarus in July was running at 18.1 per cent and is forecast to rise as high as 18.7 per cent by the end of the year. Neither will there be any respite in 2023; the bank’s forecast is 18.9 per cent.

The country’s economy meanwhile is forecast to fall by 6.2 per cent. Exports, hampered by sanctions introduced in 2020 following a rigged presidential election Lukashenko claimed to have won with an implausible 81 per cent of the vote, and expanded following Russia’s invasion of Ukraine, have fallen by 11.8 per cent.

Belarusian firms have scrambled to find new markets, but suboptimal transportation routes and financing mechanisms has increased transaction costs and weakened the price competitiveness of exports.

On October 17, the World Bank placed all loans made by its main lending arm, the International Bank for Reconstruction and Development (IBRD), to Belarus into “nonperforming” status effective immediately, citing overdue payments amounting to 68.43 million US dollars.

In recent weeks, there has been much speculation that Belarus is about to formally enter the war in Ukraine.

While Russia made use of the country as a staging post for its ultimately failed Kyiv offensive in February, Belarus has not committed troops to the Russian war effort.

But Lukashenko has met his Russian counterpart Vladimir Putin several times since the invasion began, and has regularly voted with Russia at the United Nations, most recently last week when it was one of just five countries to oppose a resolution condemning Moscow’s annexation of four Ukrainian regions. North Korea, Syria, Nicaragua and Russia itself were the others.

On October 7, Lukashenko announced that he and Putin had agreed on the deployment of a combined Russian-Belarusian “regional grouping” amid claims from Minsk that Ukraine is preparing to attack its territory. Belarus has offered no evidence of Ukraine’s aggressive intentions, and Kyiv has dismissed them as absurd inventions.

At the weekend, the first of a reported 9,000 Russian troops began arriving in Belarus ahead of live fire exercises and anti-aircraft guided missile launches.

The United States has nevertheless played down the possibility of Belarus becoming actively involved.

“It’s something we’re certainly keeping an eye on, but at this time we don’t have any indications that would cause us to change our perspectives on the battlefield,” a State Department official said on October 17.

But according to Tikhanovskaya, Lukashenko is no longer making decisions: the Kremlin is.

“Therefore, Belarus must get out of military, political and economic alliances with Russia, which undermine the national interests of our country.”

Meanwhile, the Minsk regime continues to crack down on dissent.

On October 17 a court sentenced several human rights activists to stiff prison terms on charges of terrorism and treason.

The longest sentence, of 25 years, was given to Nikolai Avtukhovich, leader of the Viasna human rights group, whose founder Ales Bialiatski was recently awarded the Nobel Peace Prize. Bialiatski, arrested in 2020, remains in detention without trial.

Since October 2020, the European Union has imposed five packages of sanctions in connection with the situation in Belarus, targeting a total of 195 individuals and 35 entities. The US and other G7 countries have also introduced a series of punitive sanctions.

More should now expected following the creation of the “regional grouping”.

Explainer: Why ‘Ukrainewashing’ is an unfair slur
Russia’s war on Ukraine is increasing child poverty across Eastern Europe and Central Asia
Comment