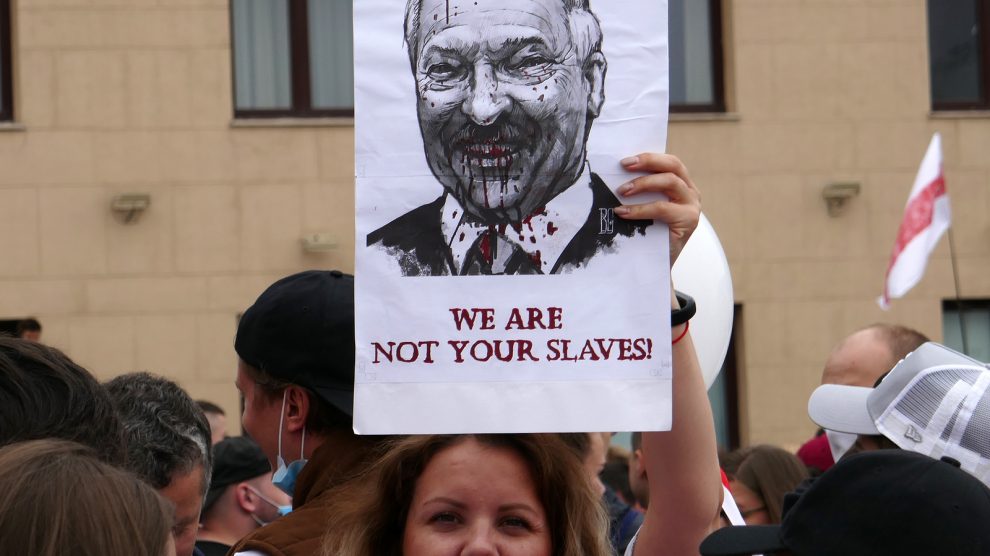 For the people of Belarus, August 9 is a bitter anniversary, marking two years since the country’s dictator Alexander Lukashenko was reelected in a sham election.

A Belarusian court last week sentenced a journalist to five years in jail for setting up an “extremist” group and organising mass unrest.

“This unacceptable verdict will meet with Poland’s immediate, decisive reaction at an international level,” he wrote on Facebook.

The Committee to Protect Journalists meanwhile called the sentencing “another example of the deeply cynical and vindictive nature of the Belarusian government”.

Slaunikava’s sentence came less than a month after another Belsat journalist, Katsiaryna Andreyeva, was handed a new prison term on top of one she was already serving for reporting on mass protests – the largest in the country’s history – that followed the country’s 2020 rigged presidential election.

Andreyeva was first arrested in August 2020 and was sentenced to two years in jail for organising mass unrest.

According to the US State Department, Belarus continues to hold more than 1,000 political prisoners.

These Belarusians, from all walks of life, have been arrested and confined simply because they peacefully exercised their rights to freedom of expression and assembly in response to the fraudulent 2020 election – in which dictator Alexander Lukashenko officially won an implausible 80 per cent of the vote.

Many of these prisoners – and those who have been previously held and released, as well as those forced to flee the country – have been subjected to reprehensible conditions.

Harsh treatment, including torture, in prisons and detention facilities has been extensively documented.  Some political prisoners suffer from serious illnesses and disabilities and have been denied necessary qualified medical care or deliberately abused to worsen their conditions.

They often are unable to find adequate legal representation due to the regime’s reprisals against defence lawyers. Dozens of lawyers have been stripped of their law licenses – and sometimes jailed themselves – because they dared to represent prisoners or opposition figures.

By any objective measure, Lukashenko lost the 2020 election to Svetlana Tikhanovskaya, who only stood for the presidency after the candidacy of her husband, Sergei Tikhanovsky, was annulled.

Sergei Tikhanovsky was sentenced last December to 18 years in prison after being found guilty of organising riots and inciting social hatred, among other charges.

Also last year, Maria Kalesnikava, who ran Tikhanovskaya’s campaign, was sentenced to 11 years in prison for her political activity along with another opposition figure, Maksim Znak. Kalesnikava started out last summer as the campaign chief of Viktor Babaryko, whose own arrest prevented him from running in a presidential election.

Babaryko was also sentenced to 14 years in prison in 2021 on corruption charges that both and he and the Belarusian opposition have always claimed were politically motivated.

Svetlana Tikhanovskaya meanwhile has become the de facto leader of the Belarusian opposition movement and from exile in Lithuania has kept up the pressure on the international community to make Lukashenko a pariah, making multiple visits to meet with world leaders and addressing international institutions including the United Nations and the European Parliament.

Tikhanovskaya has been a steadfast supporter of Ukraine ever since Russia invaded the country in February. Lukashenko meanwhile has backed Russia, allowing it to use Belarus as a base for part of its invasion and to launch rocket attacks on Ukrainian cities, although he has – officially at least – not committed Belarusian forces to the invasion.

Leaders of the Belarusian military are rumoured to oppose any direct intervention in Ukraine.

Nevertheless, in an intelligence report released late last month, the United Kingdom’s Ministry of Defence said Lukashenko is becoming more authoritarian than ever and has become increasingly dependent on his counterpart in Moscow, Vladimir Putin.

The report said Lukashenko “continues to follow Moscow’s line on the Ukraine conflict”.

“His regime has become even more authoritarian, with the expansion of the death penalty for ‘preparing terrorist acts,'” the report reads. “His increasing and baseless accusations of Western designs on Belarus and Ukraine likely indicate that he has become almost wholly dependent on Russia.”

Belarusians are overwhelmingly anti-war. According to a May survey by the Warsaw-based Belarusian Analytical Workshop (BAM), 85 per cent said they were against their troops joining Russian military action in Ukraine.

Only eight per cent supported sending Belarusian soldiers to Ukraine, a drop from 11 per cent registered by a similar survey in March. A study by London-based Chatham House in June showed this portion to be even smaller, only two per cent. The majority did not support Russia’s military action in Ukraine.

Some Belarusians have actively opposed the Russian invasion of Ukraine. Partisans, including many railway workers, carried out dozens of acts of sabotage in March and April to make tracks unusable by Russian forces. Three railway workers are currently awaiting trial for their actions, and could face the death penalty.

For Tikhanovskaya, the fate of Belarus is now inextricably linked to that of Ukraine. At a recent conference in Tallinn, Estonia, she said that Lukashenko remained in power only with Russian backing and that he had lost the support of the Belarusian people.

Defeat of Russia in Ukraine would offer Belarusians “a window of opportunity to hold new, fair elections”, she said.

While Belarus has been subject to Western sanctions ever since Lukashenko’s crackdown against the post-election protests of 2020 began, they are not as harsh as those imposed on Russia.

According to Belarusian opposition politician Pavel Latushka, it is now time to align the sanctions against both countries.

“The Western sanctions are leaky, which is why we appeal to the West to align the sanctions on Belarus with those on Russia,” Latushka said in an interview with Euractiv, suggesting Moscow has found ways to avoid certain punitive measures via its neighbour.

Sanctions are, however, hurting the Belarusian economy. The Belarusian finance ministry said last month that Western sanctions have limited Minsk’s ability to deal in foreign currencies and are pushing the country into default.

According to the Vienna Institute for International Economic Studies (wiiw), the Belarusian economy will contract by 4.5 per cent in 2022, the largest drop in GDP of any country in the emerging Europe region, except for war-torn Ukraine.

“The effects of Western sanctions in response to the country’s support for Russia are manifesting themselves,” wiiw says.