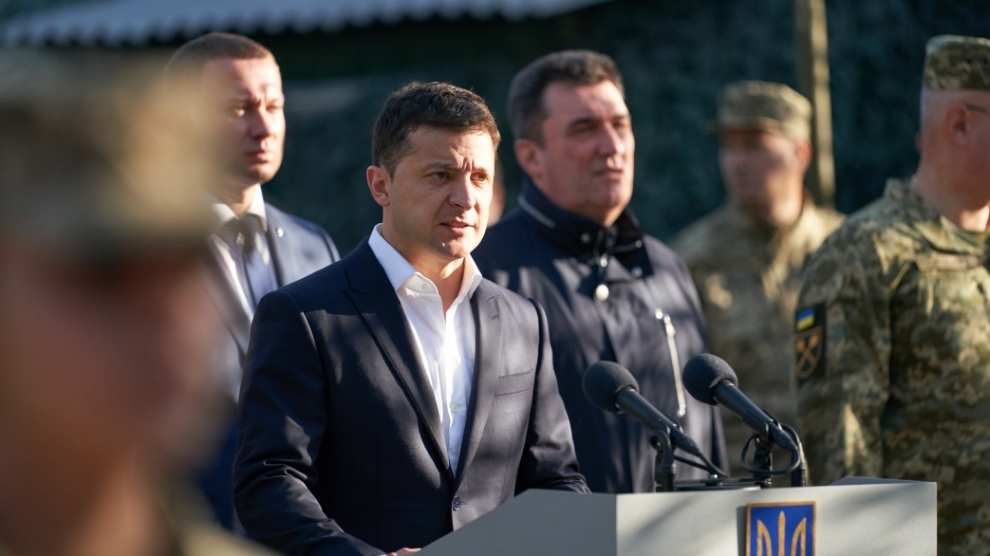 Ukraine’s war-torn Donbas region is unlikely to find a road to peace in 2020 unless the country’s president Volodymyr Zelensky can shore up international support for his country’s independence. At a time when Ukraine’s positions are being eroded by the actions of its allies, rebuilding an international coalition opposed to Russia’s aggression is crucial to avoiding a scenario in which the country will be forced to make concessions to its neighbour.

The leaders of France, Germany, Russia and Ukraine finally returned to the negotiating table on December 9 – for the first time in three years – within the framework of the so-called Normandy format, a quadrilateral forum that has the aim of bringing peace to the Donbas region in the east of Ukraine.

While the resumption of talks is a welcome step forward, not all participants appeared to be negotiating in good faith.

“Obviously, there will be no agreement,” said Russian presidential spokesperson Dmitry Peskov before talks began, summing up the Russian stance.

The summit predictably ended without any major agreement, although nobody – except perhaps the Ukrainians – had expectations otherwise.

The four leaders did agree on a number of key points, including an “all-for-all” prisoner swap as well as recommitment towards the Minsk Agreements, the 2015 peace accords that aimed to end the conflict, and to the so-called Steinmeier formula which envisages a permanent special status for Donbas in exchange for the holding of internationally-observed local elections.

While time which has passed since the summit demonstrates that Ukraine’s leadership is working on new ways to bring an end to the Donbas war, the key dimensions of peace talks remained largely undiscussed, not to mention that there have been a number of ceasefire violations over the past month.

1. Implications for the next Normandy summit

It could be argued that merely holding the summit was itself a success. Nonetheless, it fell short of Ukrainian expectations as it left the main question surrounding the settlement of the conflict unanswered: although the two sides agree on the need to withdraw troops and restore border control, Russia still wants local elections in Donbas to be organised before Ukrainian control is restored, while Kyiv hopes to regain control of its borders first.

Together with the meetings of Russian and Ukrainian officials, as well as representatives of pro-Russian rebels in Minsk, the Normandy format, which brought the Minsk accords to life, remains the main forum for peace talks. For the next summit – which will take place in Berlin this spring – Ukraine has two key issues to solve. Firstly, the country will have to make amendments to the Minsk Agreements for while the 2015 accords might have reduced the scale of violence, they have been insufficient to fully bring the armed conflict to an end.

“We are moving toward peace, peace on our terms, peace in an indivisible Ukraine, whose borders are defined by internationally recognised borders,” said Ukraine’s foreign minister Vadym Prystaiko said, summing up his first year as the country’s top diplomat and pointing to his key task for 2020.

Secondly, Ukraine has to ensure that it has the full backing of its European allies, especially the French president Emmanuel Macron who is looking to reengage with Russia in a time when Moscow’s interest seems to be remaining involved in the only active war on the European continent. Other key partners such as Germany have also weakened Ukraine’s position by supporting Nord Stream 2, the new Russian-built gas pipeline that will deliver gas directly to Western Europe, bypassing Ukraine and limit its role as a gas transit country.

So far, the EU’s sanctions against Russia, which target individuals and sectors of the country’s economy, have remained in place despite pro-Putin calls from some European governments to end them. Although these sanctions had to be introduced to show Europe’s commitment to Ukraine, they have achieved little: the EU’s set of foreign policy tools is not currently strong enough to make a real dent on the Russian economy.

Seven months into his presidency, Volodymyr Zelensky and his administration have reached two agreements with Russia, resulting in two large-scale prisoner swaps on September 7 and December 29, leaving hope for further exchanges.

On the domestic political front, one of the greatest challenges of Mr Zelensky and his government will be to find a solution in a way that will not anger his anti-Russian political opponents: they will see any major concessions as a capitulation to Moscow. All relevant Ukrainian polls say that achieving peace is the top political priority in the country. However, preserving Ukraine’s sovereignty and territorial integrity are also among the main factors to consider.

“Ukraine is a unitary state. It is an invariable article of the constitution of Ukraine and an inviolable principle of existence of the state,” Mr Zelensky said after the Normandy talks, noting that federalisation, which Russia so much wants to happen, is strictly off the table. He has also been consistent in not recognising the so-called People’s Republics of Donetsk and Luhansk in any capacity.

At the same time, the Ukrainian president is also preparing to show that he is ready to move forward with decentralisation in Donbas – as envisaged in the Minsk Agreements – and therefore introduced draft legislation to redraw the rest of Ukraine’s public administration map. In a show of goodwill, the Verkhovna Rada, Ukraine’s parliament, also approved a bill extending the Donbas region’s temporary special status for a year.

3. US commitment towards Ukraine has to be restored

Over the past few months, Ukraine has been at the centre of the world’s attention due to allegations which claim that US president Donald Trump essentially threatened to withhold security aid for Ukraine unless Mr Zelensky’s administration investigated the Ukrainian activities of former US vice president Joe Biden, Mr Trump’s main political rival.

Mr Trump is now facing an impeachment trial in the US Senate that is likely to be concluded next month.

The mere fact that the White House found politically motivated investigations more important than unconditional support for one of its allies, which is fighting a war with Russia, significantly damaged Ukraine’s position at a time when its newly elected leadership was gearing up for negotiations with Mr Putin.

Still, US policy on Russia since 2016 has been significantly tougher than it was during the presidency of Barack Obama, who was reluctant to provide Ukraine with lethal military support. However, this is solely due to a strong bipartisan coalition of Republican and Democratic lawmakers in the US Congress, not Mr Trump.

Aiming to show support for Ukraine, among others, the US Congress recently passed a bill including sanctions against Russia’s Nord Stream 2 pipeline, as well as giving the green light to 300 million US dollars-worth of additional support for the Ukrainian military.

Congress is now about to double down against Russia’s actions: the US Senate will this month vote on draft legislation Republican senator Lindsey Graham called “the sanctions bill from hell.”

“If this bill becomes law, it will be the strongest statement yet by Congress that we are tired of the discord that [Vladimir] Putin is sowing throughout the world and the threat that he poses to the neighborhood in which he resides,” Mr Graham said in December, adding that the bill includes potential sanctions against Russian banks, its sovereign debt, as well as the country’s cyber, oil and gas sectors.

In January, the US secretary of state, Mike Pompeo, will make his first visit to Kyiv since the start of the impeachment procedures. According to the US State Department, the visit will seek to highlight “the unshakable commitment to Ukraine’s sovereignty and territorial integrity” and reaffirm the importance of the US-Ukrainian “strategic partnership.”

4. The one concession Ukraine must never make

Discussions about the future of the Crimean peninsula, which has been under Russian occupation for more than five and a half years, continue to be off the table.

In case of insufficient international support for Ukraine’s sovereignty and territorial integrity, there might be a scenario in which the country’s leadership will be forced to de facto trade Crimea for peace in Donbas and reintegration of the region.

Ukraine – under both Mr Zelensky and Petro Poroshenko, his predecessor – has been consistent about rejecting Russia’s rule in Crimea.

Should Ukraine agree to hand Crimea over to Russia, it would be a major defeat for not just Ukraine, but the European community it intends to join. What’s more, it would send a signal to Russia that further aggression – be it in Georgia, Belarus or even the Baltics – is acceptable, endangering the security of the European bloc.

Despite all its domestic disputes and socio-economic problems, Russia has emerged as a major regional power and its ambitions to restore the country’s imperial positions have largely been successful. As with Georgia and Moldova, two emerging European countries that see the EU as their future but are the site of frozen conflicts, maintaining as much Russian influence as possible remains in Mr Putin’s interest.

Mr Putin went to the Normandy summit on December 9 from a position of strength and will do so again during the next round of talks. Unless, of course, NATO and the EU can show a higher level of commitment to a country that desperately wants to achieve peace.