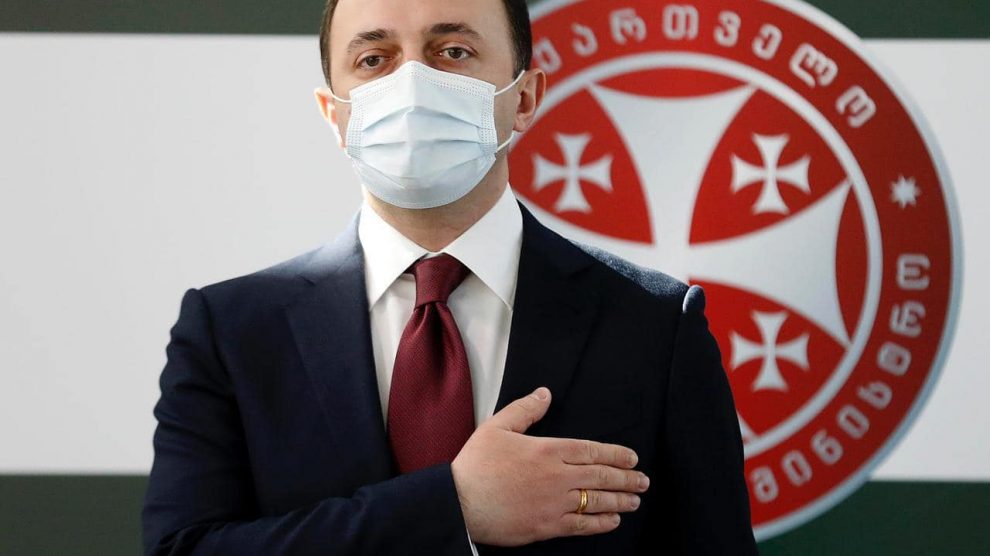 Authorities in Georgia have arrested an opposition leader, just a day after the country formed a new government, led by Irakli Garibashvili (pictured).

Georgian police arrested a top opposition leader on February 23, using tear gas in a dawn raid on his party headquarters, further deepening a political crisis sparked by last year’s parliamentary elections, the outcome of which the opposition disputes.

The arrest came days after Prime Minister Giorgi Gakharia resigned following a disagreement over whether to take Niki Melia, the chairman of the United National Movement (UNM), into custody.

Mr Gakharia, who had been PM since September 2019, resigned last week over a disagreement with his own team over the treatment of Mr Melia.

On February 22, Georgia’s parliament confirmed Irakli Garibashvili as the country’s new prime minister. Mr Garibishvili told MPs that he intended to precede with the arrest of Mr Melia, who faces charges of organising “violent mass protests” during demonstrations against the Georgian government in 2019. Melia faces up to nine years behind bars if convicted.

The UNM, and other opposition parties, claim the charges are politically motivated. They have called for Georgians protest against the arrest at the prime minister’s office later on February 23.

A Tbilisi court last week ordered that Mr Melia be taken into custody for allegedly failing to post bail. The interior ministry at the time announced it was postponing the arrest following the resignation of Mr Gakharia.

Mr Gakharia had said that Melia’s arrest was unacceptable if it threatened to fuel political divisions in the country.

Western representatives in Tbilisi have been quick to condemn Mr Melia’s arrest.

The United States Embassy to Georgia said in a statement that it is “deeply concerned by the government’s decision to detain the head of a major opposition political party at the party’s headquarters this morning.”

The statement highlighted that, “Today, Georgia has moved backward on its path toward becoming a stronger democracy in the Euro-Atlantic family of nations.”

The embassy said it “regrets that the call of the United States and other international partners for restraint and dialogue was ignored.”

“We are dismayed by the polarising rhetoric from Georgia’s leadership at a time of crisis. Force and aggression are not the solution to resolving Georgia’s political differences.”

Meanwhile, the UK ambassador to Georgia Mark Clayton wrote on Twitter that he was “shocked by the scenes at UNM headquarters this morning.”

“Violence and chaos in Tbilisi are the last thing Georgia needs right now. I urge all sides to act with restraint, now and in the coming days.”

Matthew Bryza, a senior fellow at the Atlantic Council and former US mediator of the Nagorno-Karabakh Conflict, says that the Georgian government’s “overreach” is a chance for its unified opposition to make clear that it is responsible and ready to do the tough political work required to compel the government back toward democracy.

“Such an effort would need and merit full US and EU support.”

The ruling Georgian Dream party comfortably won a parliamentary election in 2020, taking 90 seats in Georgia’s 150-seat legislature. However, despite the Organisation for Security and Co-operation in Europe (OSCE) saying that the election had been “competitive” and that fundamental freedoms had “generally” been respected, the opposition has disputed the results and has boycotted parliamentary sessions ever since.

The OSCE did, however, report allegations of pressure on voters and that the blurring of the line between party and state reduced public confidence in parts of the process.

Earlier this month, in its latest report on the implementation of the EU-Georgia Association Agreement, the EU called on Georgia to speed up judicial reform and do more to tackle political polarisation.

The report said that the political situation which has followed 2020’s elections, including the opposition boycott of parliament, demonstrates the need for further democratic consolidation.

“It is of vital importance that all Georgian political parties act within the institutional framework to find common ground and a way forward,” said the EU’s foreign policy chief Josep Borrell.

Mr Garibashvili, who is 38, previously served as Georgia’s prime minister from 2013-15, and signed the country’s Association Agreement and Deep and Comprehensive Agreement with the EU. He has also had stints as the country’s defence and interior minister.

Other changes to the cabinet include Irakli Karseladze taking over as minister of regional development, and Juansher Burchuladze replacing Garibashvili at defence.

Georgian Dream, which took power from the UNM in 2012 and has ruled the country ever since, was founded by billionaire Bidzina Ivanishvili, who made his fortune – primarily in metals and banking – in Russia in the 1990s.

Mr Ivanishvili was himself briefly prime minister in 2013 only to resign and, he said at the time, quit politics. Opponents however said that he continued to run the country from behind the scenes. In 2018, he formally returned to the party and was elected its chairman, before ostensibly retiring from politics for good in January of this year.