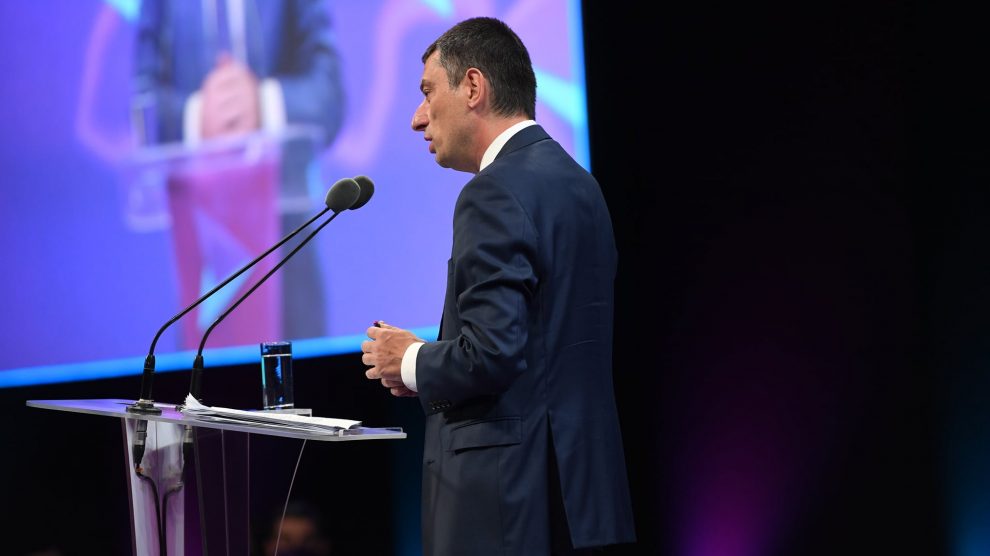 Georgian politics looks set for its biggest shake up in a decade after former prime minister Giorgi Gakharia announces the launch of a new party, one that has already attracted defectors from the ruling Georgian Dream.

Citing what he called a “distance” between the ruling Georgian Dream party and ordinary citizens, Georgia’s former prime minister Girogi Gakharia on May 29 announced that he had formed a new party, to be known as For Georgia.

Gakharia served as prime minister from September 2019 until February this year, when he resigned over the ruling party’s treatment of an opposition politican, Nika Melia.

At the time, Gakharia said that he had no intention of leaving politics, and last weekend delivered on his word, creating a new party he says will “unite” the politically fractured country.

“Today we unite for Georgia but against no one,” said Gakharia at For Georgia’s launch. “Our team will be actively involved in the political process, and I emphasise once again, we are against no one.”

The nascent party’s ranks have already been bolstered by several high-profile defections from Georgian Dream, including the former head of the presidential administration Giorgi Arbashishvili and a former Georgian ambassador to NATO, Levan Dolidze.

Gakharia led Georgian Dream to victory in a parliamentary election last October, and although results of the ballot have been fiercely disputed by the country’s opposition, international observers from the Organisation for Security andd Co-operation in Europe (OSCE) signed off on the election as being “competitive and fair”.

Nevertheless, a long political crisis followed, with the opposition boycotting parliament until a deal was agreed in April, brokered by the European Council President Charles Michel.

By then, however, Gakharia had gone, replaced by Irakli Garibashvili. Gakharia had disagreed with Georgian Dream’s decision to arrest Melia, leader of the United National Movement, for violating the terms of his bail. Melia, released as part of the Michel-brokered deal, is facing charges of organising “violent mass protests” during demonstrations against the Georgian government in 2019.

However, at the launch of his new party, Gakharia suggested that the motives behind his resignation from both the prime minister’s job and the Georgian Dream party go far beyond the Melia case.

“I left because the party distanced itself from the real problems of our citizens,” he said. “I left because after eight years in power, the ruling party compared its achievements to the reality of 10-15 years ago, killing the prospects of development in our country. I left because because at one point, [Georgian Dream] put party interests before state interests.”

He went on to identify systemic corruption, weak state institutions and the lack of social protection mechanisms as the major issues facing Georgia today.

Meanwhile, as Gakharia was unveiling For Georgia, opposition parties were holding demonstrations denouncing the former PM as representing Russian interests.

According to one activist, “[Gakharia] has always followed the orders of Bidzina Ivanishvili {Georgia’s richest person and the founder of Georgian Dream] and no one believes that he is now in opposition. Of course, he will defend the interests of the Kremlin in Georgia.”

Despite being widely viewed as one of the country’s most popular politicians, Gakharia’s career has been marred by controversy.

He received two degrees from Moscow State University and lived much of his professional life in Russia, working as an executive for the German airline Lufthansa. In 2013, when Georgian Dream first took office, Gakharia was appointed as the country’s business ombudsman. During his tenure, he was accused of defending the business interests of the ruling party and its billionaire patron.

In 2017, Gakharia was made minister of the interior. During his spell at the ministry police raided several popular nightclubs in Tbilisi, in an ostensibly anti-narcotics operation. However, the raids yielded much criticism from the public – widespread protests followed – and the ministry faced accusations that they were politically motivated.

In 2019, in what has become known as “Gavrilov’s night”, there were more protests after a visiting Russian MP was allowed to make a speech while seated in the chair of the speaker of Georgia’s parliament.

Gakharia was still interior minister at the time, and ordered the police to break up the demonstration. Police used tear gas, water cannons and rubber bullets. At least two people experienced eye injuries and loss of vision due to the use of rubber bullets.

However, a poll conducted by the National Democratic Institute in September 2019 found that while 43 per cent of Georgians thought the government responsible for use of “excessive force” in the crackdown, only nine per cent blamed Gakharia personally.

Furthermore, a poll from this February carried out by the International Republican Institute found that Gakharia was the most popular politician in the country.

The timing of Gakharia’s formation of a new party is not a coincidence. Part of the European Council-brokered deal between the rival Georgian parties stipulates that if Georgian Dream wins less than 43 per cent of proportional votes in this autumn’s local elections, a snap parliamentary election will be held.

According to one Georgian newspaper, an internal survey conducted by Georgian Dream found that the ruling party, at the moment, only expects to win around 20 per cent of the votes in the local election, well under the threshold needed to avoid a parliamentary election.

This has led many to believe that For Georgia is “controlled opposition” for Georgian Dream. However, there are also political commentators who believe that Gakharia and his party will join the opposition bloc. For Georgia has already submitted a candidate for mayor of Tbilisi.

Georgian Dream stooge or not, Gakharia looks set to be a key player in Georgian politics in the coming months.