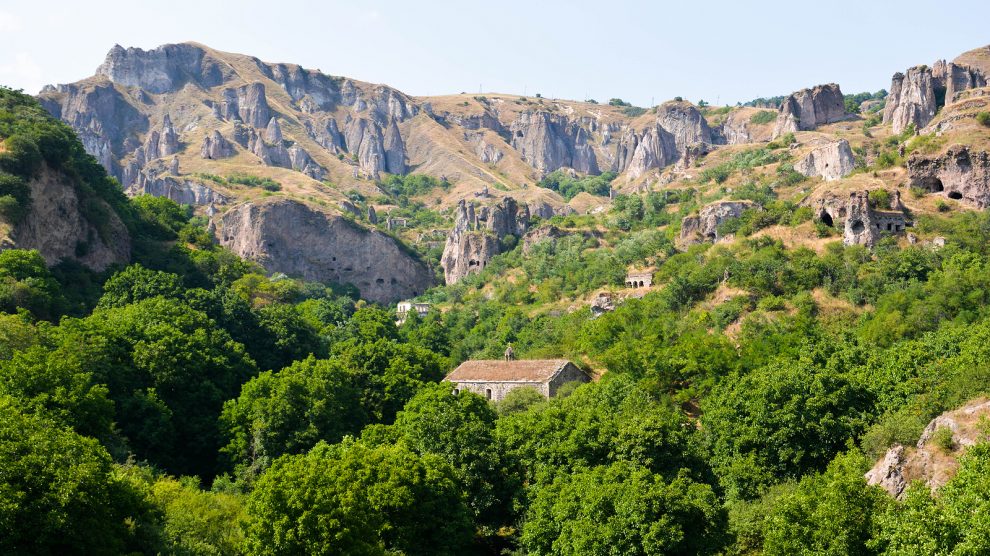 The Caucasus Mountains are widely considered to be one of the frontiers between Europe and Asia, a place were dozens of civilisations, both big and small, interacted. Consequently, it is a region with an incredibly rich array of historical sites and natural wonders spread across the four countries it encompasses.

Featuring stunning mountains and valleys, including the highest peak in Europe in Mount Elbrus, the region has near-unparalleled natural beauty, rivalled only by the awe-inspiring historical sites created by some of the oldest civilisations on earth.

And yet despite all of this, it remains an underappreciated tourist destination.

With much of the world slowly returning to a sense of relative normalcy following the Covid-19 pandemic, and travel slowly begin to start up again, countries are tentatively opening up.

We’ve selected one site from each of the four Caucasus countries to give you just a taster of what this remarkable part of the world has to offer.

Azerbaijan’s national motto is “the land of fire”. The state emblem is emblazoned with a flame. Some trace the Azer in Azerbaijan to an old Persian word for fire. The territory played a major spiritual role in Zoroastrianism – once one of the world’s biggest religions – and many Zoroastrians believed it was the birthplace of Zoroaster, its founder.

This can all be traced to the Absheron Peninsula close to the capital of Baku. Extending into the Caspian Sea, the peninsula has vast oil reserves, which cause gas to seep out onto the surface and ignite.

The result is a territory where large tracts of land which are continuously on fire. One of these areas is called Yanardag, literally Azeri for “burning mountain”. Located 17 kilometres north of Baku, visitors can take a firsthand look at the phenomena which inspired a once powerful but now virtually extinct religion.

The town of Surakhani, located on the Absheron Peninsula, hosts a 17th century Zoroastrian temple known as Ateshgah of Baku. Built by Indian Sikhs, the temple still bears Indian inscriptions on the walls and floors, a remarkable illustration of the richness of the region. The temple was designated a UNESCO World Heritage Site in 1998 and is now one of the main tourist attractions in the country.

Baku will be one of the cities hosting UEFA Euro 2020 (which is happening this summer after being delayed because of the Covid-19 pandemic) and will be one of the few venues which has already announced it will be letting fans into the stadium. So any visitors going to catch their national teams playing in Baku can make the short trip to see the Absheron Peninsula – it’s absolutely worth it.

Georgia is a criminally underrated tourist destination – in fact, googling “Georgia tourism” will get you more results about the US state than the country. And this is entirely unfair. Featuring stunning mountain scenery, rocky Black Sea beaches and world class wineries, Georgia has built a reputation within Central and Eastern Europe as the region’s Italy.

However, the country has more to offer than its natural beauty: it is also an ancient civilisation. The town of Mtskheta, located some 20 kilometres from the capital Tbilisi, is one of these reminders.

Mtskheta was founded in the fifth century BC. It was the capital of the Kingdom of Iberia, one of the ancient Georgian kingdoms, for over 700 years. It is considered to be Georgia’s most sacred city, with tens of thousands of people making the pilgrimage each year.

This is because Mtskheta was the capital of the Kingdom of Iberia when it converted to Christianity in the fourth century. This made Georgia just the third country in the world to adopt Christianity as its official religion, after only Armenia and Ethiopia. Even after the capital was moved to Tbilisi in the sixth century, Mtskheta retained its spiritual significance and continues to be the centre of the Georgian Orthodox Church.

It is little wonder then that the magnificent historical sites associated with Mtskhet are religious in nature. The seventh century Jvari monastery is built in the shape of a cross and is one of the primary gathering places for Orthodox holidays and celebrations. Sculptures in and around the monastery showcase both Greek and Persian influences, another reminder of the eclecticism of the region. The medieval Svetitskhoveli cathedral, also located in Mtskheta, hosts some of the most important ceremonies within the Georgian Orthodox Church, like the enthronement of the patriarch. The city also has many older, pre-Christian sites, many of which have fallen into ruin, but nonetheless are a must-see for any history lovers. This collection of historical buildings in Mtskheta was designated a UNESCO World Heritage Site in 1994.

Armenia is another ancient civilisation in the Caucasus with a glorious past. Once having territory which encompassed much of modern day Azerbaijan, Turkey, Syria, Lebanon and Iraq, the country is full of reminders of its past glories. Best known as being the world’s first country to adopt Christianity, Armenians have a strong sense of statehood and national identity, much of which is based on Christianity.

However, Khndzoresk doesn’t quite have any religious connotations. Instead, it is a unique cave city located deep within Syunik Province, some 250 kilometres south of the capital Yerevan. The ancients living in the area had no level ground to build their homes on, so they dug into the mountainsides. At its peak, the village housed over 8,000 people. To get around the cave city, the residents devised a complex system of ladders and ropes. They even managed to find space for four churches and seven schools within the caves.

The caves of Khndzoresk were inhabited until the 1950s, when most of the inhabitants moved to the newly-constructed twin village of New Khndzoresk.

There are competing explanations for the departure: some claim that a 1930s earthquake made the caves dangerous to inhabit and residents gradually moved out. Others claim that the Soviet authorities branded living in caves in the 20th century as “uncivilised” and forced people to move to the newly-constructed New Khndzoresk, with modern amenities.

Nevertheless, some of the cave dwellings are still in use as stables, warehouses and storage facilities.

Regardless, the cave city is a testament to human ingenuity. Khndzoresk and New Khndozresk are linked by a 160 metre-long suspension bridge swinging over a river twenty metres down. So as well as seeing a truly unique historical site, visitors can enjoy the bonus of getting one hell of an adrenaline rush crossing the bridge.

In terms of native peoples, Russia is by far Europe’s most diverse country with 35 different languages enjoying official status in various regions. With a federalist constitution which guarantees the dozens of ethnic minorities a considerable degree of autonomy, in some regions, travellers can get the impression that they are passing through different countries.

One of these regions is the Republic of Dagestan, at the southernmost tip of Russia. On the shore of the Caspian Sea lies the city of Derbent, claimed to be the oldest city in Russia and one of the oldest continuously populated cities in the world.

Inhabited by Iranic peoples since its foundation, Derbent was part of various Persian empires from the sixth century BC. These began construction on the impressive fortifications which in 2003 were designated a UNESCO World Heritage Site.

The fortifications consist of three parts: the citadel of Naryn-Kala, two parallel walls stretching east from the citadel into the Caspian Sea, and a “mountain wall” extending forty kilometres west into the Caucasus mountains. There are no fewer than 73 defensive towers, some rising as high as 30 metres dotting the fortifications. Within the complex, visitors can see inscriptions in Persian and Arabic.

Which brings us to another remarkable fact about Derbent: that it is the site of the first contact of modern-day Russian territory with the Abrahamic faiths. It is a little-known fact that Islam predates Christianity in Russia by centuries: in 654, Derbent was conquered by the Arabs and subsequently Islamised, just 22 years after Mohammed the Prophet’s death. The Juma Mosque, situated within Derbent city, was the oldest mosque in the Soviet Union and by far the oldest Abrahamic religious building in the Russian Federation.

Why Cold War Conversations is one of the world’s hottest podcasts
Steaua Bucharest’s 1986 European Cup miracle would be impossible now, but they can at least dream
Comment