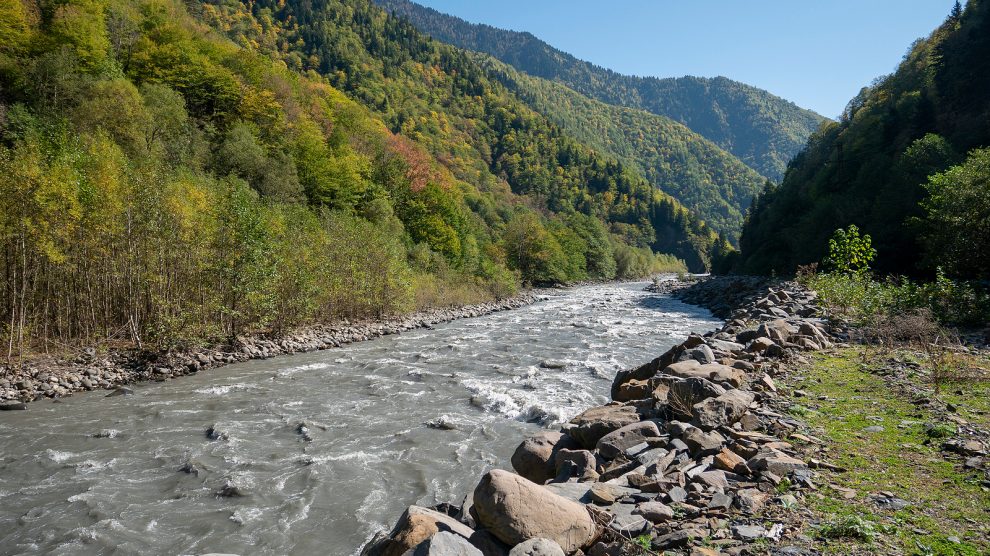 Protesters against the construction of a hydroelectric power plant in Georgia’s Rioni Valley have threatened to paralyse the capital of Tbilisi if the country’s government does not meet its list of demands.

For more than six months, a protest movement has been campaigning against the construction of the Namakhvani hydroelectric power plant (HPP) in the west of Georgia which, if built, is expected to supply 12 per cent of the country’s domestic electricity demand.

Although the government in April announced moratorium on construction of nine to twelve months to allow for more safety and feasibility research to take place, construction appears to have been continuing, prompting renewed, expanded protests.

Known as the Guardians of the Rioni Valley, protesters last weekend held a large rally in Tbilisi, where activists revealed a list demands, threatening to continue occupying major thoroughfares in the capital if they were not met.

These demands include a halt on the construction of Namakhvani HPP, the annulment of all contracts with Turkish construction firm ENKA, a moratorium on all HPP projects, the resignation of Economy Minister Natia Turnava and the initiation of criminal proceedings against Turnava and whoever else was responsible for allowing the Namakhvani project to commence.

The government response has been to reject demands and play down the threat that protesters could paralyse the capital. Prime Minister Irakli Garibashvili said that “speaking in the language of ultimatum is categorically unacceptable.”

Turnava meanwhile stressed the government’s readiness for “meaningful dialogue” but added that this “would be very difficult if streets are blocked”.

Since then, protest leader Varlam Goletiani announced a final rally would be held on May 26 (Georgia’s independence day) in the capital before the activist group returns to the Rioni Valley to continue resisting the project on site. He also slammed the government for completely failing to address the protesters’ demands, despite the massive rallies that have taken place in the capital.

The Namakhvani HPP has been defended by government officials and some analysts as a way of reducing Georgia’s energy dependency on Russia, which continues to support two breakaway regions in the country.

Georgia’s largest hydroelectric dam is currently at Enguri, located in Abkhazia, one of the breakaway regions. Despite the dam being located within Georgia’s internationally-recognised boundaries, as a result of its occupation, Georgia can only receive 60 per cent of its output – furthermore, this makes the Georgian government have to engage with separatist authorities, in a way validating their rule. This also forces Georgia to import electricity from neighbouring countries like Russia and Azerbaijan.

The 800 million US dollars Namakhvani project would see the creation of two dams and is projected to generate 1514 GW of electricity.

However, critics are concerned about the long-term social and environmental effects the project would have. To build a reservoir, the project would have to flood parts of two municipalities, uprooting locals and destroying some of the unique biodiversity in the region. It is also argued that this would threaten some of the region’s cultural heritage, like wine making.

Locals also have little trust in the investors in the project. One of ENKA’s shareholders, Norwegian firm Clean Energy, previously built the Shuakhevi HPP in Georgia, whose tunnels collapsed just two months after the dam became operational.

People have also raised concerns that if the Namakhvani dam were to be damaged or destroyed, whether due to technical failures or natural circumstances (the Caucasus area is prone to earthquakes), a 34-metre tall wave would engulf the downhill city of Kutaisi.
Kutaisi is Georgia’s third largest city and carries much historical and cultural significance.

Seismologists from Georgia’s Institute of Earth Scientists released a statement expressing their belief that only a moderately strong earthquake would be sufficient to cause such a catastrophe, and that the project’s environmental assessment was not conducted thoroughly enough.

The protests have managed to attract a wide range of people, from locals directly affected by the dam’s construction to striking trade union representatives, to church organisations and LGBT advocacy groups. A rally in March in Kutaisi was the largest environmentally-focused rally in Georgia’s history.

Because of this, the government and much of the media appears to have been smearing the protests. Some have cynically linked the protests to a Russia, claiming that the movement does Russia’s bidding by sabotaging Georgia’s efforts at becoming energy independent. In an apparent effort to derail the protests by causing internal divisions, there have been incidences of homophobic violence directed against some participants.

Furthermore, the Turkish government, through its Tbilisi embassy, claimed that the protests were Islamophobic in nature, due to the heavy use of Christian symbols, such as crosses, during the protests.

However, the movement appears to be a truly grassroots, popular protest unencumbered by political trappings. Both the country’s ruling Georgian Dream party and the largest opposition parties have indicated their support for the project.