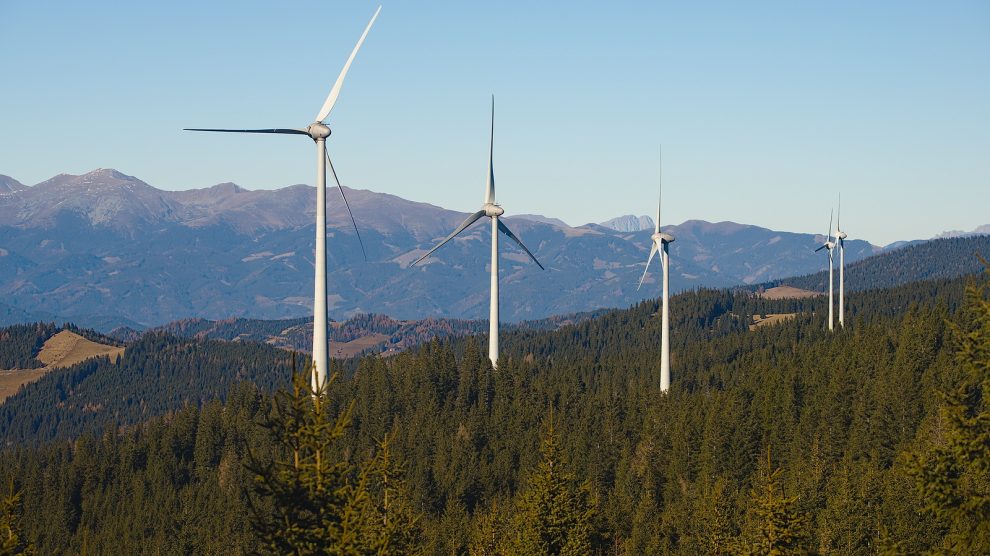 Poland, Czechia, Slovakia and Hungary are lagging behind in green transformation, and green pioneers such as Austria could benefit as a technology leader in climate and environment. It’s time for Vienna to push crossborder cooperation.

On the day that Poland’s Climate Minister Anna Moskwa said that the European Union’s plans to ban the registration of new petrol and diesel cars from 2035 are “unrealistic”, a new report was published which reveals that the four Visegrád countries (Poland, Czechia, Slovakia and Hungary) are lagging behind the EU-15 in the green restructuring of their economies.

This is the conclusion of a new study by the Vienna Institute for International Economic Studies (wiiw) commissioned by the Austrian Ministry of Finance, which identifies the main obstacles to the transition to a low-emissions, sustainable growth model in these countries, but also takes detailed stock of the status quo of their green transformation.

It examines the share of renewable energies in the areas of electricity, transport and buildings, efficiency in the use of energy and raw materials, as well as the functioning of the principle of circular economy anchored in the “European Green Deal”.

The report concludes that although the Visegrád states met their 2020 national targets, there is still a massive need to catch up in an EU comparison, for example in renewable energies. While these account for slightly less than 40 per cent of energy consumed in Austria, the leading countries among the Visegrád four – Czechia and Slovakia – use renewable energy at just half that level.

There is also still a lot of room for improvement in the recycling of raw materials, energy efficiency and in the transport sector. This opens up great opportunities for Austria’s industry, the report suggests, which is a leader in many environmental technologies such as hydropower, wind power, biomass, heat pumps and the thermal renovation of buildings. Austria should therefore take on a pioneering role in cross-border environmental projects with the Visegrád countries, the study recommends.

Automotive and mining as structural obstacles

As to why the region is lagging behind in its green transformation, the reasons are obvious, says Tobias Riepl, an economist at wiiw and a co-author of the study.

“For example, the automotive industry, whose value creation and supply chains are still focused on the combustion engine, plays a dominant role in the region,” he says.

“A quarter of all cars manufactured in the EU come from these four countries. Their conversion to the production of purely electrically-powered vehicles could cost many jobs. The same is true for the employment-intensive coal mining industry in Poland.

“For fear of too rapid a structural change, the Polish government is understandably putting the brakes on the ‘European Green Deal’,” Riepl adds.

However, other important reasons for the need to catch up in terms of CO2 reduction also result from the communist past.

Despite an impressive catching-up process since 1989, the level of economic development in the four countries is still below that of Austria or Germany. And this despite the fact that they have succeeded in decoupling economic growth from CO2 consumption, with growth increasing more strongly than CO2 emissions.

“The Visegrád states are still in a process of economic convergence, which tends to lead to an increase in CO2 emissions and therefore partly conflicts with the EU climate goals,” says Riepl.

In addition, they have inherited a lot of energy inefficient buildings and industries from communist times, as well as electricity production that is highly dependent on nuclear and coalfired power plants. Poland, for example, generates 70 per cent of its electricity from coal, while Czechia, Hungary and Slovakia generate between 37 per cent and 54 per cent from nuclear energy.

In view of this economic structure, awareness of the consequences of climate change is also much lower among these populations than in Western Europe.

In addition, there is the temptation, in the wake of the Ukraine war, to replace Russian natural gas and oil with locally available fossil fuels such as coal in order to reduce these countries’ high dependence on Russia.

In the event of a total stop of Russian gas supplies, Slovakia, Hungary and Czechia would face a supply gap of no less than 40 per cent of their demand. In any case, the further expansion of nuclear power and a renaissance of coal are already on the horizon.

According to the study, Austria can play a key role in the green transformation in Poland, Czechia, Slovakia and Hungary.

On the one hand, this is because of its close economic ties with these countries and, on the other, because of its industry’s technological leadership in the environmental sector.

“The real driver of the green transformation there is the substantial funding from Brussels. Almost 40 per cent of all projects in the Corona reconstruction programme NextGenerationEU must be climate relevant,” says Riepl.

“However, the Visegrád states lack the industrial base and technological competence for their implementation. Austria has both and also a lot of experience in these countries.”

The study therefore recommends that Austria develop cross-border projects for green electricity generation, for example for hydropower in Hungary, biomass in Poland or wind power in Czechia and Slovakia.

Furthermore, the authors advocate the creation of regional cooperation to ensure energy security for renewables. The building and transport sectors are also seen as particularly promising. Despite considerable progress in insulating buildings through national support programmes for energy efficient construction, the Visegrád countries have an acute lack of companies that can carry out thermal renovation.

Austrian companies are among the world market leaders in heat pumps, the use of derived heat and green building technology. The same applies to the urgently needed electrification of road and rail transport in these countries. In the transport sector, they have so far mainly relied on biofuel to improve their environmental footprint.

Last but not least, research on green technologies, such as electricity storage, should be promoted across borders. In close cooperation with Poland, Czechia, Slovakia and Hungary, Austria must use the political momentum from the Ukraine war to push for a switch to renewables in the Visegrád countries, the study suggests.