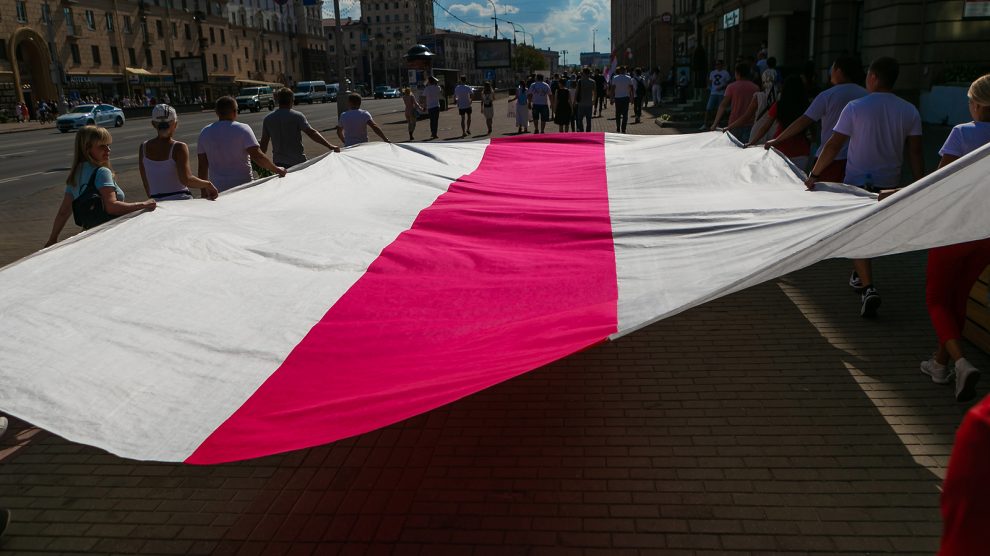 As Belarus celebrates Freedom Day, the country’s opposition is calling for new protests against the country’s dictator, Alexander Lukashenko.

The opposition in Belarus is hoping that fresh demonstrations will breathe new life into a protest movement that has abated in recent months in the wake of fierce repression from security forces still loyal to the country’s dictator, Alexander Lukashenko.

The protests initially broke out following Lukashenko’s implausible claim that he had won last August’s presidential election with 80 per cent of the vote.

By any objective measure, the election was won by opposition candidate Svetlana Tikhanovskaya.

Tikhanovskaya was quickly forced into exile in Lithuania, while her husband Sergei Tikhanovsky, a popular YouTuber (who had been barred from standing in the election himself) and campaign team were arrested.

Mr Tikhanovsky was later jailed, and remains in prison pending trial for fraud charges that he denies, and which he claims are politically motivated.

“The whole world believes in you,” she wrote on her Telegram channel on March 23, calling on Belarusians to “take the future” in their hands and “demonstrate this spring”.

International condemnation for the brutal way in which Mr Lukashenko’s security forces have put down the protests against his regime has so far been limited.

While the European Union, the United Kingdom and the United States have so far offered support for the Belarusian opposition, and have imposed some personal sanctions against leading figures within the Belarusian regime, Mr Lukashenko has so far been unwavering in his determination to cling on to power.

The limited sanctions have so far had little effect.

Meanwhile, the leaders of 50 journalists’ unions and associations in 34 European countries have called on their governments to intensify pressure and take action in the face of constant violations of human rights and press freedom in Belarus.

In a joint letter published to coincide with Freedom Day, they urge their heads of government to demand from the Belarusian authorities the immediate release of 12 imprisoned journalists and the withdrawal of administrative and criminal proceedings against all Belarusian journalists.

On the initiative of the European Federation of Journalists (EFJ) and its affiliate in Belarus, the Belarusian Association of Journalists (BAJ), the leaders of 50 journalists’ organisations in 34 countries in Europe sent the letter to European heads of state and government on a day which is expected to be marked with new nationwide protests.

Activists around the world will hold protests outside Belarusian embassies and share messages of solidarity with peaceful protesters.

The co-signatories of the EFJ-BAJ letter express their “deep concern about the intensification of repression in Belarus. (…) Today, there are over 250 political prisoners in the country, including 12 journalists. And this is just the tip of the iceberg. Since the fraudulent presidential elections of August 9, 2020, more than 30,000 people (including 480 journalists) have been detained, with many of them subjected to torture and ill-treatment, and over 1,000 people targeted by criminal prosecution.”

The joint letter urges European heads of state to demand from the Belarusian authorities the immediate release of the 12 imprisoned journalists, the withdrawal of administrative and criminal proceedings against Belarusian journalists, and the reopening of the Minsk press club.

It also wants them to appeal to the United Nations, the Organisation for Security and Co-operation in Europe (OSCE), the Council of Europe and the European Union, so that the international community intensifies pressure and takes action in the face of constant violations of human rights and press freedom in Belarus.

“We welcome the March 24 decision by the UN Human Rights Council to set up a team of investigators to gather evidence about the excessive use of force and torture by authorities in Belarus during their post-election crackdown on peaceful protesters,” says EFJ President Mogens Blicher Bjerregård, “but this is not enough. The repression continues and intensifies. The regime of the dictator Lukashenko must release all political prisoners without delay, including 12 journalists who have only done their job. It must also end all pending prosecutions. We will work with BAJ to ensure that all those responsible for the repression of journalists are prosecuted and convicted. It is high time for European governments and the international community to take action.”

Revitalising Ukraine’s defence sector, and with it, its military
Fears grow for fate of Armenian POWs held by Azerbaijan
Comment