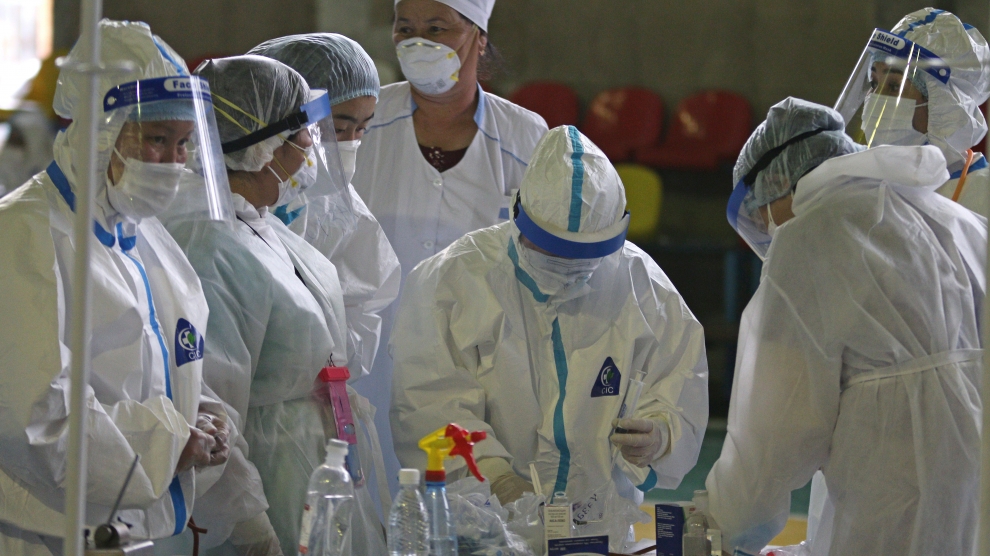 Health workers in Kyrgyzstan have paid an astoundingly high personal price during the Covid-19 pandemic, which has seen them forced to work long hours, often without promised additional pay and sometimes with reduced pay, and subjected to a “prison-like” quarantine regime, Amnesty International has claimed in a new report.

According to official data from the country’s ministry of health, during the peak of the epidemic from mid-March to July 22, 29 health workers died. However, unofficial sources put the figure at 40.

“Kyrgyzstani doctors have worked selflessly, risking their lives every day looking after their patients, often in the absence of vital medical supplies. Short of adequate support from the authorities, they have relied on the assistance of volunteers. It is appalling that in return they were denied their human rights, underpaid and forced to keep quiet about their problems for fear of retaliation,” said Heather McGill, Amnesty International’s researcher on Central Asia.

Since May, under the ministry of health’s so-called “Barracks Regime,” doctors have been called on to work 12-hour shifts every day for two weeks at a time followed by two weeks of quarantine. One doctor described quarantine conditions as “being like in prison” with reports of health workers often living 10 to a room and unable to see their families.

“I am now working 24 hours a day. I can’t leave because there are so many patients. I am working in a Covid department – I am the only doctor. I have an assistant who is a surgeon. I am the manager and I can’t just leave at the end of my shift. I have to be there constantly. We manage to sleep three to four hours. I have been working like this for 30 days,” one doctor told Amnesty International.

Health workers interviewed by Amnesty International reported that in the early stages of the pandemic they were obliged to work without adequate supplies of PPE, which was often only available to those working in designated “red zones” with confirmed Covid-19 patients.

Doctors also complained to Amnesty International about the poor quality of the PPE they received, and the lack of adequate training in its use.

Despite their sacrifices, doctors interviewed by Amnesty International revealed that they haven’t been paid in a timely manner and some have even experienced arbitrary cuts to their salaries. “The main thing is that they pay us the salary they promised. I have to feed my family,” said one doctor, who complained that this promise was not met.

Doctors in Kyrgyzstan are among the lowest paid professionals in the country, and this has contributed to a brain drain of medical personnel to other countries and to the private sector, which in turn contributes to the chronic shortage of doctors in the state sector.

Most worryingly, doctors contacted in the course of the research were often unwilling to speak out, and even of those who agreed to be interviewed asked not to be identified, for fear of reprisals from their superiors. In the few instances when doctors have publicly complained, they have suffered threats, dismissal or humiliation from their employers.

“The government of Kyrgyzstan should take steps to build greater resilience in the health system to better cope with the pandemic, and focus on protecting the rights of health workers. It must also ensure that everyone in the country can exercise their right to freedom of expression, and adopt measures to protect whistle-blowers,” said McGill.

Amnesty has now called on Kyrgyzstan to live up to its human rights obligations under the International Covenant on Economic, Social and Cultural Rights and guarantee just and favourable conditions of work for all workers including health workers. It says that the ministry of health must ensure that all doctors are provided with PPE that complies with international standards and that they are properly trained in how to use it to avoid infection.