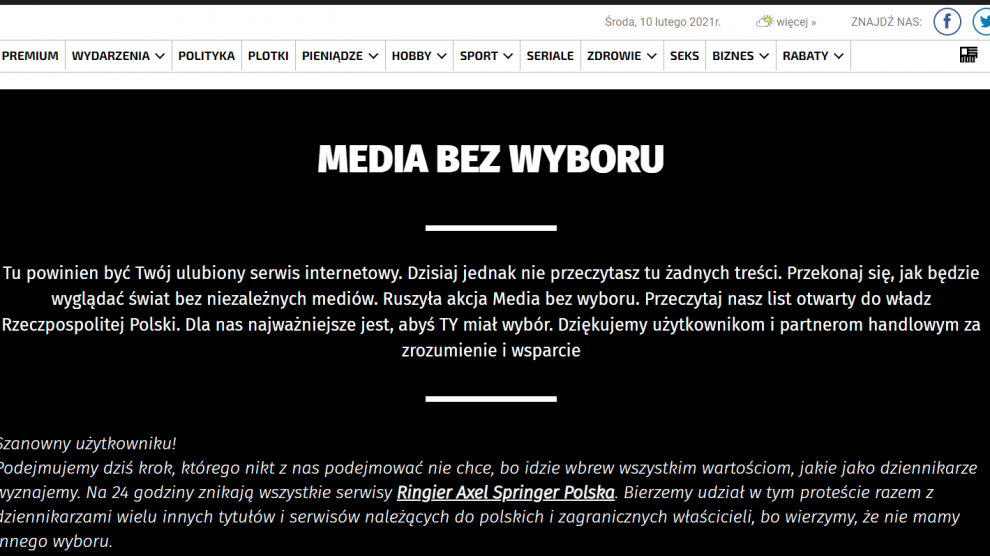 Poland’s independent media companies instituted a blackout on February 10 in protest at a new tax on advertising revenue.

The new tax was announced by Prime Minister Mateusz Morawiecki last week, who said that his government plans to impose a levy on advertising revenues and use the proceeds to support the national health care system, culture and free media.

“This is nothing new and something we agreed upon in the European Union some time ago,” said Mr Morawiecki on February 3.

“We are dealing with a huge imbalance. Global media corporations dominate and can do so even more through their capital power.”

He reiterated his support for the tax on February 9, saying that it was similar to levies in France, Italy and Spain.

The new tax, which is currently being rushed through parliament, is expected to take effect from July 1, and the government claims that it could raise up to 800 million zloty (178 million euros) in 2022.

“This is simply a tribute that will hit the Polish viewer, listener, reader and internet user, as well as Polish productions, culture, entertainment, sport and the media,” read an open letter published instead of news on the websites of more than 40 media outlets, including newspapers, magazines, cinema chains, TV and radio stations and record companies.

“[The tax] will weaken or even bankrupt some of the media operating in Poland, which will significantly limit society’s ability to choose the content that interests them,” continues the letter.

“The production [of independent media] currently supports hundreds of thousands of employees and their families, and provides most Poles with access to information, entertainment and sports events largely free of charge.”

Signatories include major publishers and broadcasters such as Ringier Axel Springer, Burda, Canal+ and TVN.

The new levy will tax advertising revenue at rates ranging from two to 15 per cent. While Poland’s state broadcaster, TVP, will also be hit by the tax, the letter points out that it is the recipient of huge state subsidies.

Like many independent publishers, Fakt, one of Poland’s largest tabloids, replaced the front page of its website with the message Media Bez Wyboru (Media Without Choice), saying: “Your favourite website should be here. Today, however, you won’t read any content here. Find out what the world will be like without independent media.”

The Media Without Choice campaign has already received much international support, including from the former US Secretary of State Madeleine Albright, who tweeted: “As someone who cares deeply about Poland, I am alarmed at this latest effort by the Polish government to stifle free media. We must call this out for what it is — an attack on democracy and the rule of law.”

As someone who cares deeply about Poland, I am alarmed at this latest effort by the Polish government to stifle free media. We must call this out for what it is — an attack on democracy and the rule of law. https://t.co/zsR4qkrD8z

Concern for the future of independent media in Poland has been expressed for some time, following repeated calls from leading politicians within the ruling Law and Justice party (PiS) for the “repolonisation” of Poland’s private media, in which they claim foreign groups have too much influence.

Critics of Poland’s government called it a dark day for media freedom, since it effectively means the government is seizing control of an important publisher of independent news.

Critical and independent media already suffer from not receiving the same level of advertising from state-owned firms as pro-government outlets, putting them in a financially precarious position. Large companies – including PKN Orlen – are only advertised on outlets that satisfy PiS’s editorial standards.

As Bartosz Wieliński, the deputy editor-in-chief of Poland’s largest independent outlet, Gazeta Wyborcza told Emerging Europe last year, “right after the change of government in 2015, all the subscriptions of state institutions were cancelled, as well as adverting deals from state-owned enterprises, such as PTQ Insurance. They cancelled everything, and in days they signed with small outlets lacking in our range or quality, but run by their people.”

In November 2020, the European Parliament expressed its “deeply concern” about the state of media freedom within the EU and denounced the violence, harassment and pressure faced by journalists.

In a resolution adopted on November 25, Parliament pointed to “attempts by governments of some member states to silence critical and independent media and undermine media freedom and pluralism”. MEPs are particularly concerned about the state of public service media in some EU countries, where they have become an “example of pro-government propaganda”.

“Today we witness democracy being withdrawn, power taken with lies. There is no freedom without media independence, no democracy without media pluralism. Media should serve the truth, not lies. It should serve voters, not those in power, and should be a check on power. Media should protect democracy, but media can also kill it. That is why it must be independent,” said Polish MEP Magdalena Adamowicz.

Adamowicz is a lawyer and the widow of Paweł Adamowicz, a former mayor of Gdańsk murdered by a mentally unstable ex-convict in 2019.

“Press freedom has been under attack in Poland ever since PiS was elected in 2015,” RSF said earlier this month. “A law adopted in December of that year, over the objections of many international organisations including RSF, gave the ruling party close control of the public media, enabling it to gag them, turn them into propaganda outlets and fire their bosses at will.”

“The independence of Poland’s media is enshrined in the law but, in practice, it is very relative,” says RSF editor-in-chief Pauline Adès-Mével. “Firing experienced journalists whose professionalism has never been disputed violates a democratic society’s rules and threatens press freedom. Employment policy must be based on merit and transparency, not on affinities with ruling party leaders.”

Ms Adès-Mével was speaking after the firing of two experienced journalists, Dariusz Rosiak and Wojciech Majcherek, from Poland’s public broadcaster in mid-January.