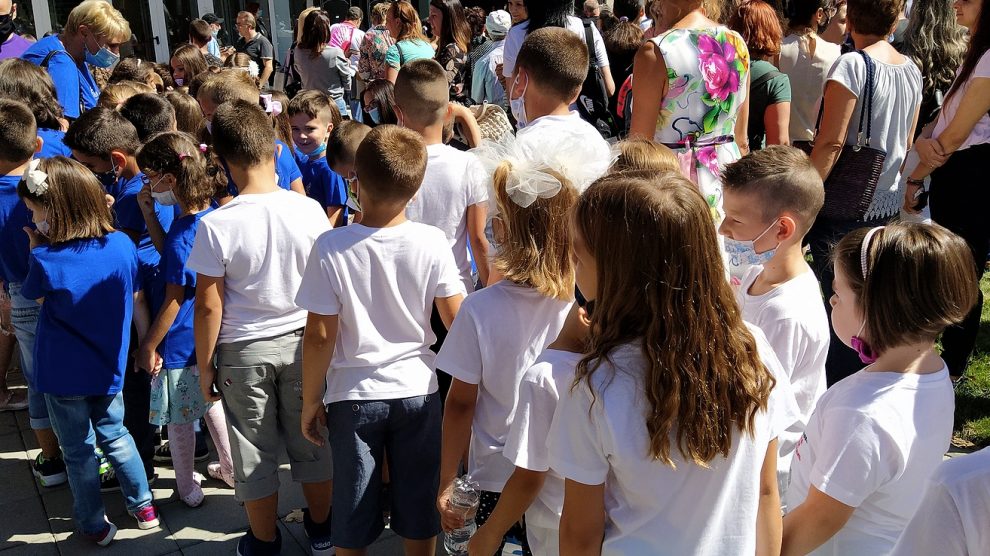 A foundation in Serbia is offering schoolchildren free textbooks as PDF downloads. But not everyone is happy.

A proverbial storm in a teacup is raging in Serbia, over a charity foundation’s decision to offer free elementary school textbooks in PDF format. Criticism of the Alek Kavčić Foundation, led by a Serbian Carnegie Mellon professor, is coming primarily from the Association of Textbook Publishers of Serbia, which represents the interests of the country’s private publishers.

In Serbia, primary and secondary education, at least on paper, is free. However, the textbooks are not. In one of the poorest countries in Europe, this expenditure has long been troublesome for many families. A typical textbook costs around 800 Serbian dinars (6.8 euros), so the full set can easily exceed one hundred euros per child each year.

Textbook publishing is big business. According to the Serbian media, in 2019 the market was estimated at between 35 and 50 million euros.

In many European countries, textbooks for elementary school pupils are either free or subsidised. According to European Commission’s education portal Eurydice, in Germany, as a rule children are lent textbooks. The same is true in Austria.

In Albania, starting from the 2018-19 school year, free textbooks have been provided from the first to the fourth grade, according to Eurydice.

While there have been sporadic programmes in Serbia to help struggling families by giving away free copies, the general rule is that parents need to finance the books. According to a statement from the Association of Textbook Publishers, every sixth pupil in Serbia has received free textbooks, under a state programme aimed at helping socially vulnerable families.

Legally, issues of fairness and accessibility are sidestepped by the provision that textbooks are elective, and parents are not under any obligation to purchase them. Not wishing the hinder their child’s education, however, the vast majority do buy them.

This was the status quo in Serbia until early this year, when the Alek Kavčić Foundation began to offer PDF versions of textbooks as a free download on its website. Some of these were produced specifically for the foundation, but most editions are from the state-owned Institute for Textbooks, which has been struggling ever since the market was liberalised.

Currently, the foundation offers textbooks on a various subjects for elementary school pupils, and says more are coming. The challenge to traditional publishers also comes during a time when elementary schools schools are by law obliged to select the textbooks which they will use in the upcoming 2021-22 school year.

“Free textbooks for all elementary school pupils is something I’ve wanted for a very long time. Something that I wanted to give back to the country I was born in and which educated me,” Mr Kavčič tells Emerging Europe.

When it comes to private publishers, Mr Kavčić doesn’t mince his words.

“I think the fact that elementary education is mandatory, but the textbook market is free, where publishers compete for profit, is completely wrong,” he explains.

The public reaction has been overwhelmingly positive, with over 9,000 textbooks downloaded on the day that the service went live.

Mr Kavčić additionally tells Emerging Europe that some schools have actually already decided to use the foundation’s free textbooks in class.

Almost immediately, the foundation found itself under fire from the Association of Textbook Publishers and one of the largest textbook publishers, the German-based Klett.

In a statement published on the Association’s website, they called the offering of free textbooks “cheap political tricks aimed at the self-promotion of one person” and expressed their opinion that this will “fundamentally set back the quality of education in Serbia”.

Prof. Dr Mićo Mitrović, the president of the Association of Textbook Publishers, and the owner of the publishing house Saznanje, tells Emerging Europe that PDFs as textbooks just won’t do.

“Because all the research — I am a physicist, I teach methodology of teaching at the Physics Faculty and I do science in that field — all scientific research shows that the best combination for teaching is the live word of the teacher and a written textbook,” he says. “A PDF is not that. Written textbooks, and that’s it.”

According to the Serbian daily newspaper Danas, the association has also sent a memo to schools in Serbia telling them that the PDF textbooks on the site are not cleared for use by the ministry of education.  It’s a big of a grey area, as the PDFs are of textbooks whose print editions have already been approved for use, but there is the issue of whether or not the PDFs can be considered a “digital textbook” under the provisions of Serbian law.

Of the many issues the publishers have with the arrangement, copyright, and the actual print quality issue are the most salient. As Serbian media have reported, the deal between the foundation and Institute for Textbooks is such that the foundation purchased 1,000 copies of each textbook and also got the right to put the PDFs online where individuals may access them for personal use, with the copyright being retained by the institute.

The association has raised questions about this arrangement, calling it “suspicious.”

Ivan Perić, programme director at Klett, says that the foundation has “worked illegally” because they “uploaded the institutes’s textbooks without asking the authors.”

But Mr Kavčić negates these claims.

“We bought the the print editions [from the Institute for Textbooks] and we expect that the authors will be paid royalties,” he says.

According to Serbian law, there are provisions on the actual print quality. This has also become a bone of contention in the spat between the publishers and the foundation. Publishers have criticised the didactic value of the PDF format, and noted that if parents print them out themselves at local print shops, the cost will actually be higher than just purchasing a new textbook.

In response Mr Kavćić has pledged to offer the option of printing the textbooks on demand at a cost of two Serbian dinars per page, far below the market price. Mr Kavčić considers this a “realistic price” and says that a biology textbook that usually costs around 1,000 Serbian dinars will as such cost only 400 dinars.

The back and forth between Kavčić and the private publishers continues. Most recently, Mr Kavčić shared on Twitter a screen grab of a text message in which, allegedly, a school director tells teachers they won’t be able to teach pupils who have the free textbooks and that social services will “deal with” the parents.

Meanwhile, Professor Mitrović says that the media in Serbia are giving undue prominence to the foundation.

“The other side is receiving disproportionate time and our statements are cut. And in general, they don’t [call us],” he explains.

By offering textbooks for free, the Alek Kavčić Foundation has clearly shaken up a market that was for years dominated by Klett. Since the market in Serbia was liberalised following the 2000 fall of Slobodan Milošević, resentment against foreign market players has remained high.

Additionally, public sentiment in Serbia tends to bristle anytime something is revealed to be cheaper or free in countries more developed than Serbia.

Recently, Serbian president Aleksandar Vučić said he will suggest to the government that schools books in Serbian, geography, and history, should be produced by the state and not by private entities.

Right now, the argument between the publishers and the Alek Kavčić Foundation is ongoing. The body which could settle the issue, the ministry of education, has so far been silent.

As for the publishers, Prof. Mitrović says everyone supports free textbooks, but PDFs, again, don’t cut it.

“It’s not an action with the goal of bettering the conditions in this area [education], simply put it’s a step back if you’re promoting PDFs which are not textbooks that provide the best education,” he says.

Mr Mitrović also notes that his publishing house Saznanje, as well as many other publishers, give out free textbooks to those students who cannot afford them but are not covered by the ministry of education schemes that help disadvantaged students as well as to charity organisations, such as children’s group homes, organisations that support disabled people, and others.

“Free textbooks, of course, we all support that, but it should be done with normal textbooks that are right for teaching,” he says.