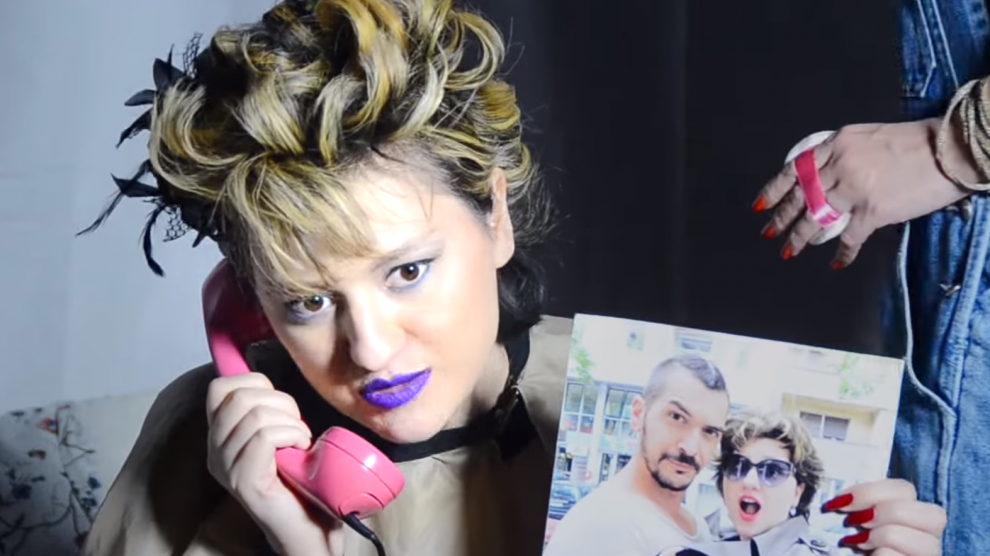 Serbian pop star Doris produces music that is a deeply idiosyncratic take on pop and rhythm and blues, with a nod to the 1980s and a Yugoslavia that never ended, and some really out-there dance moves. What more could you want?

The show, widely understood to be awful, was nevertheless popular (and is still on the air), and an appearance was a way to get yourself beamed directly into the homes of millions.

The segment in question began with show’s the host, the eponymous Žika, introducing a singer who would perform – unusually for a programme that usually traffics in folk music – in English.

The performer’s name was Doris Bizetić Nygrin, whose father, Boris Bizetić, was himself a rock star.

What unfolded next made Doris one of the strangest presences on the Serbian music scene, a phenomenon that resists interpretation and categorisation. But let’s not get ahead of ourselves.

As Doris takes the mic, her hair done up in a 1980s-style perm, her black dress shining with sequins, she is a picture out of a provincial Yugoslavian disco.

The lyrics are simple, while the music sounds as though it was composed on a toy Casio synthesiser. Then there are the moves, which resemble dancing but don’t quite ever land.

Yet something about it all is completely transfixing. Videos of Doris’ TV performances are quickly shared online, as are her self-produced music videos. Almost instantly, to those who appreciate outsider art and camp, Doris becomes an overnight star.

It’s worth pausing for a moment to delineate exactly what outsider music is. A musical equivalent to outsider art, outsider music is a term applied for works created outside of the traditional industry by people who usually have little or no training and who may, for various reasons, have unrealistic views of their own ability.

Florence Forster Jenkins, the socialite and coloratura soprano who shocked and delighted New York with her offbeat delivery and stage presence is a classic example.

Over time, interest in both outsider art and outsider music has increased and led to a more serious analysis of the phenomenon, with many critics praising the self-taught and offbeat stylings of such acts as The Shaggs, Tiny Tim, Tonetta, and Wesley Willis.

Despite their unskilled, strange, and deeply idiosyncratic performances, music critics have noted the earnestness and the honesty present in so much of their work. As music historian and journalist Irwin Chusid says, “They don’t boldly break the rules, because they don’t know there are rules.”

Between outsider and camp

While Doris can definitely be seen as an outsider, as all her albums are self-published, there is the matter of her quite famous (if faded) father.

And, in purely technical terms, her singing is, quite simply – bad. Then again, this didn’t stop Bob Dylan, Björk, or Karin Dreijer, so why should it stop Doris?

A famous father is not the only way Doris departs from typical outsider music. Unlike most such artists, she does formal have training in music, as a singer, sound engineer, and producer. She produced several of her father’s albums.

Is Doris an example of camp, then? In her seminal essay Notes on Camp, the American writer Susan Sontag makes the point that naïve camp is always better than deliberate camp. In a way, the truest and best camp comes from works of art that attempt to do something grand and then fail in an interesting way.

There is definitely something very naïve about Doris. By 2016, her budgets had ostensibly increased and the videos reveal far higher production values. Yet the music was still exceedingly simplistic, Doris was still singing her sometimes poorly translated English lyrics over an accompaniment that could have been believably produced by one of those “make your own beats” smartphone apps.

Yet, despite the odd strange turn of phrase, there is sincerity and immediacy in her lyrics, a true hallmark of music produced out of the mainstream, and without the influence of commercial cynicism.

Her sense of style remains much the same, as well. Heavily indebted to the eighties with a signature new wave hairstyle, her outfits remain on brand. A style simultaneously from the past and from the future.

Camp runs in the family

Camp runs in the Bizetić family. Boris Bizetić did have a relatively successful solo career as an earnest singer-songwriter, but in Serbian pop culture he is best known for being a member of the novelty rock band Rokeri s Moravu (Rockers from Morava). And for portraying a drag character, Slavujka, an exaggerated comical take on rural old ladies from central Serbia, on his 1990s comedy sketch show.

Professional reviews of Doris’ work are scarce to non-existent. Where she has been talked about in the culture media that cover the Balkan region, she has been called “Ariel Pink overdosed on auto-tune”, “wonderfully freaky”, and “ready for LA”.

With acts such as Doris Bizetić Nygrin, the question of authenticity is always posed. Is she in on the joke? Is it a joke at all?

Whatever her motivation, and despite her ongoing battle with multiple sclerosis, Doris doesn’t show signs of stopping anytime soon. Last year, she released her fourth studio album, appropriately titled 4th Album, sounding as fresh and as unique as ever.

“Since no one else in our country is doing what I am doing, I can say — when they ask me, that I have no competition,” Doris once wrote in a Facebook post. Delusions of grandeur or a knowing wink? Most likely, we’ll never know.

It seems that Doris exists on a particularly strange intersection of outsider music and camp, where the best course of action is to dispense with questions altogether, and just enjoy it for what it is: a deeply idiosyncratic take on pop and rhythm and blues, with a nod to the 1980s and a Yugoslavia that never ended, and some really out-there dance moves.

What more could you possibly want from a pop star?

Main photo: Still from the official video of Crying Out Loud.