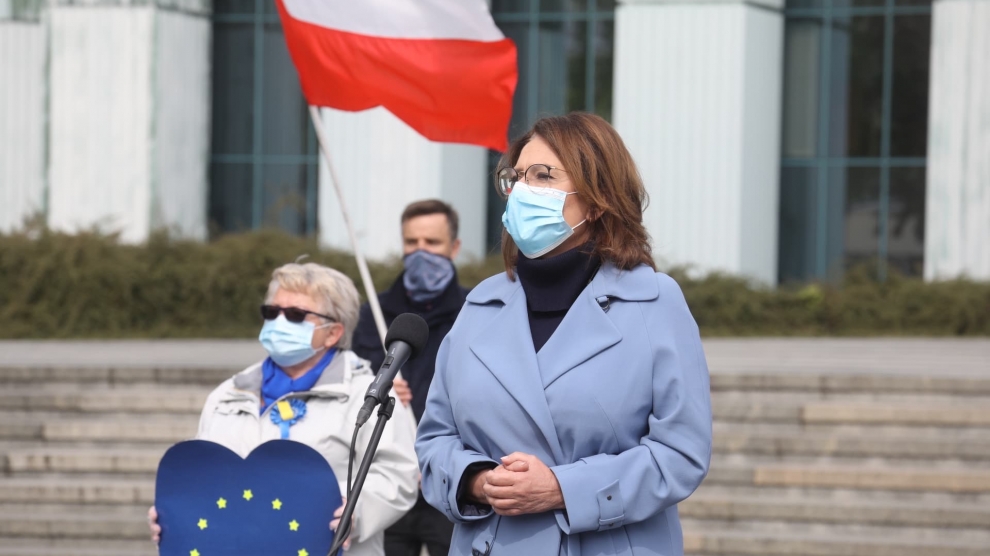 Poland’s governing coalition parties have agreed to postpone Sunday’s presidential election because of the coronavirus outbreak. The nationalist Law and Justice (PiS) party had wanted the vote to go ahead to get the incumbent, Andrzej Duda, re-elected. But junior coalition partner Agreement and the opposition said PiS was putting political gain ahead of public health. The election will now be rescheduled “as soon as possible” but will still be a postal-only ballot.

In a joint statement made late on May 6, Jarosław Kaczyński, head of PiS, and Jarosław Gowin, leader of Agreement, said that their decision was “a solution that will guarantee Poles the opportunity to participate in democratic elections.”

Both international and Polish election observers had raised concerns the ballot would not be sufficiently transparent nor fair given that candidates have suspended campaigning due to the Covid-19 lockdown. A number of opposition figures, including Małgorzata Kidawa-Błońska, standing for the Civic Platform, went so far as to call the election a “coup d’etat not only against our democracy but also against the life and health of Poles. This election will not be democratic and the result is fixed in advance. We cannot take part or encourage Poles to take part in this farce, this election must not go ahead on May 10.”

Poland’s Covid-19 numbers – 14,740 confirmed infections and 733 deaths – are far lower than in many Western European countries, but the Polish health minister Łukasz Szumowski has warned that cases have not yet peaked. Nevertheless, the country began relaxing lockdown restrictions last week, allowing some shops and businesses to reopen.

PiS had stubbornly sought to stick to the original election date of May 10 by making it a postal vote, but had been unable to get the necessary legislation through parliament following the objections of Mr Gowin and some of his MPs. The legislation passed the lower house of parliament last month but the senate took a month to debate it, then rejected it on May 5. The bill returned to the lower house, but there was no time left before Sunday to prepare the ballots and have postal workers deliver them to voters.

The lower house of parliament is on May 7 still expected to vote whether to approve legislation that would allow for a postal vote as and when the election takes place.

Adam Bielan, the campaign spokesman for Mr Duda, told broadcaster TVN24 that he now expected the election to be held in late June or early July. Mr Duda’s current term expires in August.

Whenever the election is held, Mr Duda – who polls at around 50 per cent – is expected to win, possibly in the first round. His opponents however have long claimed that he benefits from more coverage on state television, while normal election campaigning has been impossible.