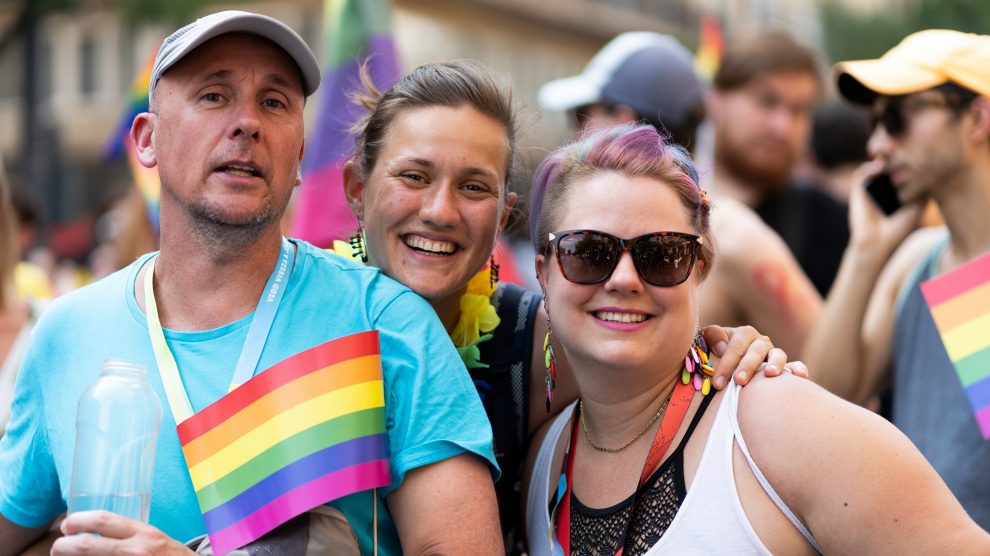 Viktor Orbán’s government has intensified its crusade against the LGBT+ community within the last year ignoring the growing public acceptance of LGBT+ people.

It’s not a good time for the LGBT+ community in Hungary.

Last year, using emergency Covid-19 related powers, the government pushed through a law that ended legal recognition for transgender people, meaning they could no longer change their official document to match their actual gender. In December, parliament amended the definition of family in its constitution to allow an effective ban on adoption by same-sex couples.

In July, a law was passed that bans the “promotion” of LGBT+ lifestyles to children — a move that activists call censorious and will detrimental to young LGBT+ people. Following harsh reactions from the EU, Viktor Orbán floated the idea of a referendum — complete with five loaded questions.

But are these measures aimed against the LGBT+ community actually as popular as they seem?

Recent surveys found that a surprising number of people in Hungary support LGBT+ rights — one carried out in June by Závecz Research places that number at 56 per cent of all Hungarians.

Rising anger over the policies of Hungary’s right-wing government prompted some 30,000 people to fill the streets of the country’s capital to march in support of LGBT+ rights in the annual Budapest Pride parade on July 24.

Also, civil unions for same-sex couples have been legal since 2009 and numbers of such unions per year have remained relatively steady.

Last year, there were 126 same-sex registered civil partnerships in Hungary, seventeen more than in 2019, according to the Central Statistical Office.

So why, then, has the Hungarian government adopted such harsh policies against the LGBT+ community?

“It is an autocratic state in which the leader can stabilise and increase power by creating enemies from which he and his government will ‘protect’ the people. It mostly attacks vulnerable groups who have little opportunity to defend themselves and towards which the society’s attitude is divided, so it’s easy to arouse hatred against them,” explains Anna Borgos from the lesbian activist organisation Labrisz.

Ákos Modolo from the Szimpozion organisation, another LGBTQ advocacy group in the country, says that the real reason Fidesz is attacking the LGBT community is to rally their voter base.

“They have a strategy that they are always looking for an enemy to blame, and they always want to distract the Hungarian public from other topics — this was the case with the refugee crisis in 2015, and they are doing the same now but against LGBT+ community,” he says.

To activists and international observers, it’s clear that the Orbán government is gearing up for the 2022 general election.

“Hungary is an example of a government scapegoating of LGBT+ people in the pursuit of political gain, via smear campaigns and roll-backs on their human rights. LGBT+ people are being branded as ‘a threat to traditional family values’ and a ‘foreign import,’ in a tactic to divide the population and distract from pressing issues, such the rule of law, media freedom, corruption, and spying on the opposition,” says Belinda Dear, an advocacy officer with ILGA-Europe.

Modolo adds that Fidesz and Orbán are not trying to appeal to the broader Hungarian society but instead to their strong and numerous voter base.

It might be clear what the political game is, but the effects of such laws and campaigns on the lives of the actual LGBT+ individuals in Hungary can’t be ignored.

In Hungary, Szimpozion has been running a school sensitisation programme for the last 21 years. As part of that programme, activists have visited mostly high schools where they talk to students about the LGBT+ community, how LGBT+ people live, and what challenges they face.

Now, because of the new law, organisations like Szimpozion most likely won’t be able to continue their work. As Modolo says, the law directly targets them.

But despite the law being vague and the fact that promotion is not a legal term, the changes in Hungary are already having a chilling effect on activism and public discourse.

“We will probably not be able to go to high schools anymore,” Modolo says. “We talked to a lot of teachers who have invited us in the previous years, and they said they would be afraid of inviting us and of talking about these topics with the students because they are afraid of being fired or getting criminal charges. This law causes fear and self-censorship among the teachers.”

According to Modolo, there will be consequences for the LGBT+ youth as well.

“There are some students who will feel encouraged by the homophobic and transphobic statements of the government. If they see that very high-ranking politicians can make such homophobic statements, then everyday high schools students will think that this is acceptable, this is right, and this will encourage them to be radicalised.”

One positive thing about the entire situation, however, is that the Hungarian LGBT+ community has become more visible than ever. It’s not just the 30,000 people at Pride, Modolo explains that many LGBT+ people who were previously silent and in the closet and are now realising they must be heard.

“I have conservative gay friends who were very sceptical about LGBT+ activism, but now they have come out to their friends to their family, and this is a consequence of the law.”

And as for the possible referendum that echoes the one from 2016 which was targeted at refugees and was also full of leading questions, Modolo expects that progressive organisations will boycott it.

“My expectation is that most of the opposition parties and most of the LGBT+ associations, Szimpozion included, will boycott this referendum because this makes no sense, and this is only a propaganda tool for the Hungarian government,” he concludes.

Another solution would be to cast a vote for political parties that reflect the opinion of the majority of Hungarians in the upcoming general election.