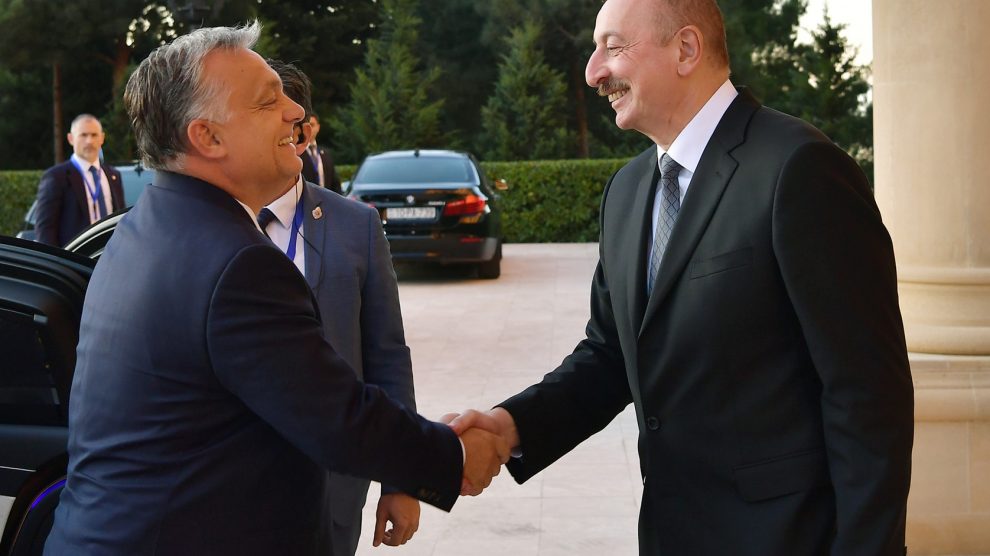 The governments of Hungary and Azerbaijan have been implicated in the alleged hacking of phones belonging to investigative journalists and opposition-affiliated activists. Hungary’s opposition has even called for ministerial resignations but there are fears that neither of the two governments is likely to face major consequences.

Since Viktor Orban was elected prime minister in 2010, watchdogs, human rights groups and activists have regularly decried the authoritarian turn the country appeared to be taking. Combining a strict conservative nationalism with anti-migrant xenophobia and euroscepticism, Orban’s Fidesz party has been waging war on domestic opposition, branded as agents of a “globalist conspiracy”.

Journalists have regularly found themselves in the crosshairs. Since 2010, Hungary has tumbled from 23rd place to 92nd in the World Press Freedom Index.

While the leaked data appeared to include subjects of legitimate national security investigations, Project Pegasus found numbers of at least ten lawyers, five journalists and one opposition politician.

The spyware, known as Pegasus, is owned by Israeli company NSO Group. It allows a party to monitor a target’s data, including text messages, emails and phone calls. It can even grant the user access to the target’s phone’s microphone and camera. NSO Group has been in the headlines before for allegedly being used to target a human rights activist in the United Arab Emirates and Cecilio Pinedo Barto, a Mexican investigative journalist who was murdered in 2017.

The company has denied the information revealed in the Pegasus Project and claimed that its software is only used for legitimate purposes, like fighting crime and terrorism.

“We firmly deny the false allegation made in their report. Their sources have supplied them with information that has no factual basis, as evident by the lack of supporting documentation for many of their claims. In fact, these allegations are so outrageous and far from reality that NSO is considering a defamation lawsuit,” the company said in a statement.

However, this explanation is not satisfactory for David Vig, director of Amnesty International in Hungary. “NSO Group can no longer hide behind the claim that its spyware is only used to fight crime…We call on NSO Group to immediately stop selling its equipment to countries with a track record of putting human rights defenders and journalists under unlawful surveillance,” he says.

The state denies and deflects

The Hungarian government has been tight-lipped about the allegations. Hungary’s justice minister, Judit Varga told reporters at a news conference in Brussels that “Hungary is a state governed by the rule of law and, like any decent state, in the 21st century, it has the technical means to carry out its national security tasks. It would be a serious problem if we did not have these tools, but they are used in a lawful manner.”

Meanwhile, pro-government daily newspaper Magyar Nemzet interprets the whole scandal as yet “another attack on the Hungarian government by NGOs financed by George Soros.”

Soros is a Hungarian billionaire and the founder of the Open Society Foundation. He is prominently featured in right-wing conspiracy theories around the world about a supposedly concerted plan to usher in “globalism” by injecting “liberal cosmopolitan” ideas into populations.

Robert Friss, writing for Hungarian left-leaning newspaper Nepszava, argues that it is “outrageous” that Fidesz representatives are refusing to acknowledge the scandal and that such moves are the first steps towards “dictatorship and police state”. Opposition politicians like Klara Dobrev of the Democratic Coalition have called on European Union bodies to investigate the leaks and hold the perpetrators accountable.

Such calls have been echoed by Amnesty International.

“The Hungarian government should immediately provide a meaningful response to the latest revelation by the Pegasus Project and clarify whether it knew about or approved the covert surveillance of journalists, businessmen and others. If Hungarian authorities did know about these violations, they must explain on what basis they allowed,” said David Vig.

With mounting evidence about the revelations’ veracity, the Hungarian government looks set to be under major scrutiny. However, many doubt that this would affect its position.

“Domestically, I see little chance that there would be consequences [for the Hungarian government],” says Szabolcs Panyi, a journalist with independent outlet Direkt36.

Panyi is one of the journalists whose phone was hacked by the Pegasus spyware. And although the Budapest Regional Investigation Prosecutor’s Office announced on July 22 that it would “investigate the so-called Pegasus case, under the suspicion of the crime of gathering unauthorised secret information,” Panyi believes there is little chance this would yield anything substantial.

“All the relevant investigative bodies, like the police or the prosecutor’s office, are led by Fidesz loyalists, and in the last decade, we see a pattern that investigations into high-level government corruption or abuses of power are usually not even launched or quickly dropped by authorities,” he tells Emerging Europe.
On July 26, deputies from the ruling Fidesz party boycotted a parliamentary hearing intended to discuss the issues around Pegasus. This essentially deprived the opposition of the chance to inquire into the exposed surveillance of journalists, opposition figures and government critics. Janos Stummer of far-right opposition party Jobbik branded the boycott an act of “sabotage” by the ruling party.

For years, Viktor Orban has been becoming increasingly isolated from the EU’s mainstream — this latest scandal may yet put unprecedented pressure on him and Fidesz. However, how much this may actually impact the ruling party is still up for debate.

“On an EU level, we see that the European Commission has had multiple chances to put pressure on the Orban government due to its crackdown on free media, but it’s usually all talk, no action. Since national security is an area over which the EU’s bodies have little influence, there is not much space for investigation or sanctioning,” Panyi tells Emerging Europe.

He believes that for any government officials to face any kind of sanctions for their role in the surveillance, there would need to be “rock-solid evidence” connecting them to misuses of the Pegasus software.

Within Hungary, at least, people don’t seem to be letting the issue pass them by.

Gergely Karacsony, Budapest’s liberal mayor, and a potential challenger to Viktor Orban in next year’s elections led calls for government figures to resign in the wake of the scandal. The calls fall squarely on the country’s minister of justice, Judit Varga, who appeared to deflect questions about the scandal during a press conference in Brussels.

Furthermore, on July 26, about 1000 Hungarians took to the streets in Budapest to voice their dissatisfaction with the government’s response to the revelations.

A preponderance of evidence

Another country in the region implicated in the Pegasus Project is Azerbaijan. Ilham Aliyev already has a reputation as an authoritarian dictator. In power since 2003, he has regularly cracked down on independent journalists and opposition politicians. Over the past few years, opposition activists have accused Aliyev’s security apparatus of using increasingly sophisticated digital tools to monitor and surveil critics.

These claims appear to be validated now. A July 18 report by OCCRP, an organisation of investigative journalists operating in Eastern Europe, the Caucasus, Central Asia and Central America analysed hundreds of Azerbaijani phone numbers revealed by the Pegasus Project. A forensic analysis of the mobile phones of at least two Azeri citizens found that the phones were infected with the Pegasus spyware.

While OCCRP’s report stated that there is “no definitive proof that the Azerbaijani government is a client of NSO group”, the “preponderance of evidence suggests that that is the case”. It claimed that all but a few of the 245 leaked Azerbaijani numbers belonged to journalists, activists, lawyers and opposition members. Journalists and media representatives alone made up a fifth of the leaked numbers.

Arguably the most prominent figure allegedly targeted by the Azerbaijani government is Khadija Ismayilova, a highly renowned investigative journalist who has previously served an 18-month prison sentence for her work. She has also been a victim of blackmail when government representatives threatened to reveal a sex tape involving her.

She claims that even figures nebulously connected to her — like her niece, a few friends and her regular taxi driver are also targeted by the spyware. To date, the government is yet to respond to the allegations.

As well as demonstrating the considerable security ties between Azerbaijan and Israel, this whole episode exposes the extent to which Azerbaijan’s increasingly authoritarian government goes to silence its critics. With Aliyev riding on a high of popular support following last November’s victory over Armenia in Nagorno-Karabakh, the revelations may yet go virtually unnoticed within the country.

And unlike Hungary, Azerbaijan is not subject to transnational institutions such as the European Union, giving the government much greater leeway to wriggle out of the controversy. For journalists, activists and opposition figures in the country, things may yet get worse before they get better.

Main photo: Office of the President of Azerbaijan